Thanks to Donald Trump, Iran Quickly Could Build a Nuclear Weapon 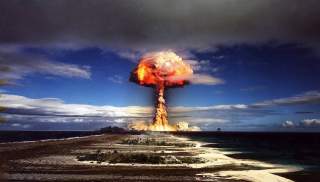 Iran on Jan. 5, 2020 announced it would no longer honor international restrictions on its enrichment of uranium, a key process in the production of nuclear weapons.

The announcement three days after U.S. president Donald Trump ordered the killing of Maj. Gen. Qassem Soleimani, the head of Iran’s Revolutionary Guard Corps militia and one of the country’s top military leaders.

Iran’s announcement regarding uranium enrichment “essentially sounded the death knell” of the 2015 nuclear agreement that then-U.S. president Barack Obama negotiated in order to keep Tehran from obtaining its first nuclear weapon, according to The New York Times.

“And it largely re-creates conditions that led Israel and the United States to consider destroying Iran’s facilities a decade ago, again bringing them closer to the potential of open conflict with Tehran that was avoided by the accord,” the Times noted.

Trump in 2018 unilaterally withdrew the United States from the nuclear deal, weakening it without totally destroying it. Iran, Russia. China, France, Germany, the United Kingdom and the European Union remained parties to the accord.

Lifting limits on enrichment leaves very little of the nuclear deal in effect. But that doesn’t mean there’s no hope for preventing Iran from obtaining the bomb.

“Iran remains a signatory to the Nuclear Non-Proliferation Treaty, which prohibits it from developing nuclear weapons,” explained Edwin Lyman, a scientist in the Union of Concerned Scientists in Massachusetts. “However, Iran’s uranium enrichment facilities could enable it to produce highly enriched uranium—uranium enriched to greater than 20 percent of the isotope uranium-235, which can be used to make a nuclear weapon.”

While the Non-Proliferation Treaty does not prohibit Iran from producing highly enriched uranium for peaceful purposes or for naval nuclear propulsion, the 2015 agreement restricted Iran from enriching uranium to greater than 3.67 percent uranium-235.

The 2015 deal’s numerical limits on Iran’s uranium enrichment program were intended to increase the “breakout” time it would take Iran to produce enough highly enriched uranium to build a nuclear weapon if it were to make the decision to do so.

The 2015 agreement could not have physically prevented Iran from acquiring nuclear weapons, but it would have provided additional time for the international community to respond before Iran could build a weapon.

As recently as May 2019, experts estimated Iran’s breakout time to be around one year. Lifting limits on enrichment could dramatically shorten that timeline, Lyman wrote. “The extent to which the breakout time will decrease will depend on what Iran does next.”

“Iran has said it will continue to fully cooperate with the International Atomic Energy Agency, which presumably will enable the agency to closely monitor any increase in the number and type of installed centrifuges as well as the quantities of enriched uranium at various levels that Iran produces and stockpiles.”

It’s worth pointing out that Tehran hasn’t ejected international observers of its nuclear program. Iran’s foreign minister “held open the possibility that his nation would return to its provisions in the future — if Mr. Trump reversed course and lifted the sanctions he has imposed since withdrawing from the accord,” according to the Times.

Lyman urged a return to diplomacy.

“It is also important to note that Iran has made clear its decision is reversible if the United States ended its nuclear-related economic sanctions, which the 2015 deal required. Instead of ratcheting up pressure, which would give Iranian hard-liners the upper hand and could prod Iran to develop nuclear weapons, President Trump should take immediate steps to diffuse tensions, including recommitting to the terms of the nuclear deal. Only diplomacy—not military action—will make a peaceful resolution possible.”

But the time it would take for Iran to produce a nuclear weapon now is very short. Prior to Iran lifting limits on enrichment, experts estimated it would take the country a year to produce enough material for an atomic warhead.

If Iran takes the next logical step and builds up its stockpile of enriched uranium, the timeline for producing a nuke could shrink from a year to mere months.