Thanksgiving Lesson: Why Cranberries are a Good Investment for your Stomach and Wallet 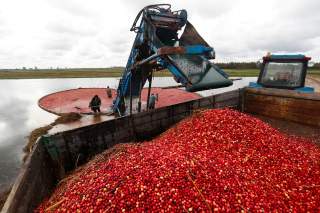 Name all the billion-dollar crops grown in the U.S. Midwest. The answer: Corn, soybeans and cranberries. Wait, what?

Roughly 60 percent of the U.S. cranberry crop is produced in Wisconsin, generating close to US$1 billion in revenue and 4,000 jobs. Other top-producing states include Massachusetts, New Jersey, Oregon and Washington. Overall, cranberries are almost exclusively North American. Roughly 85 percent are grown in the United States and Canada, with the rest scattered across Chile, Western Europe and a few former Soviet republics.

But although many Americans see cranberries as a staple for Thanksgiving and Christmas, we associate them mainly with the winter holidays – unlike, say, mashed potatoes and gravy. That’s a problem for the cranberry business, which faces an uncertain future as supply wildly outstrips demand. The industry is working to boost demand for cranberry products at home and expand new export markets in Asia and Latin America.

I have spent close to 20 years studying farmers, food executives, eaters, tastemakers, activists and politicians, attempting to better understand, among other things, how niche, novel and/or foreign foods become commonplace over time. Many of these lessons are explained in my recent book “No One Eats Alone: Food as a Social Enterprise.” The history of food is full of tales where supply initially preceded demand, proving that necessity isn’t always the mother of invention. Sometimes it works the other way.

In agriculture, short-term profits have a way of blinding players to the long game. When crop prices rise, farmers expand production, creating surpluses that push prices back down again. Cranberries are a case in point.

Adjusting for inflation, cranberry prices increased at a steady 6.3 percent for almost 25 years prior to the mid-1990s. In 1996 cranberries hit $65 a barrel, which led to record crops and oversupply in ensuing years. By 1999 cranberry farmers were getting a paltry $17.20 per barrel.

Reeling, the industry needed a savor. It came in the form of a dried-up sugary snack: Craisins, created by the Ocean Spray co-op, which controls 65 percent of the U.S. cranberry industry. Competitors were quick to jump on board with their own versions, more blandly branded as “dried cranberries.” Prices rose to record levels, and farms once again expanded production. By 2008 Ocean Spray was reportedly paying growers $70 per barrel.

Craisins boosted profits by generating demand, but leftover cranberry juice concentrate sat orphaned in storage thanks to flat cranberry juice sales. By 2015 cranberry prices had fallen to $8 per barrel. It takes a price of $30 to $34 for farmers to break even.

Unlike most Midwest crops, cranberries are perennials. Once planted, a bog can produce indefinitely. Some are over 100 years old. But this also means that cranberry farmers cannot simply convert bogs to soybeans or corn in years with low cranberry prices. As one former cranberry grower from Carver, Massachusetts put it, the land “generally isn’t good for anything else.” He covered his four acres of cranberry bogs with solar arrays and now produces a megawatt of power.

Ocean Spray execs are hoping for another miracle, this time from a group of organic compounds called proanthocyanidins. Those are the powerful antioxidants that, among other things, make cranberry juice so effective at treating urinary tract infections. The company is adding proanthocyanidins into low-calorie juices. It is also energetically marketing cranberries worldwide, including in countries that don’t even have a word for “cranberry.”

How can such a distinctively American, holiday-tied product make a break for the mainstream? Consider the story of the once-lowly soybean.

From cattle feed to human staple

Until the 1970s, most Americans viewed soybeans as a nonfood item. The stigma was so strong that soybean oil had to be labeled vegetable oil because no one would buy it otherwise.

“It was viewed as what cows ate, not [as] people food,” an American Soybean Association representative recently told me. Today the U.S. edible soybean industry, having rebranded its product as “edamame,” is approaching $5 billion in annual revenues, up from $1 billion just 20 years ago.

Soybeans got their big break in 1971 when they were added to the list of commodities supported by the National School Lunch Program. A humble start as a meat extender accustomed a generation of Americans to the idea that soybeans could feed more than livestock.

I call this the bridging pathway, and have seen it work successfully for dozens of foods, including tofu hot dogs, edamame chips, soy burgers and cricket gumbo. The key is to incorporate new foods into existing meal patterns and dietary behaviors, rather than than trying to displace century-old practices and recipes overnight.

Bridges usually lead to somewhere, so this pathway implies a long game. First you get people used to the idea of eating a food by using it to extend another, more acceptable food. Then you get them to eat it straight. As my American Soybean Association contact explained to me, “Now it’s about making it normal, even cool, to eat edamame,” by getting cooked edamame into schools and into the hands and mouths of trend makers, including teen social media personalities and vloggers.

A berry for all seasons

Eating cranberries straight might not be on the immediate horizon. If you’ve ever tried a fresh one, you’ll know why: Pucker-tart! Now, however, they are associated almost exclusively with winter holiday dinners. There are 11 other months and two other meals in every day when we could be eating them.

Taking a lesson from soybeans, the cranberry industry might pursue the angle of meat filler – though I’m sure the marketing wizards that came up with “Craisins” could find a better term. As I can attest from growing up in rural Iowa, there is a powerful imperative in some parts of the United States to serve meat at every meal, or at least something that looks like meat. I have heard chefs praise cranberries’ properties as a meat extender: They add a deep red color, sweet-sour zing and moisture to burgers.

If the cranberry lobby can get their product into the National School Lunch Program as a meat extender, cranberries might satisfy not only USDA “meat/meat alternative” dietary requirements – they could also represent a serving of fruit, or more. Keep in mind that pizza with two tablespoons of tomato paste qualifies as a vegetable in the eyes of Congress. Proanthocyanidins, anyone?