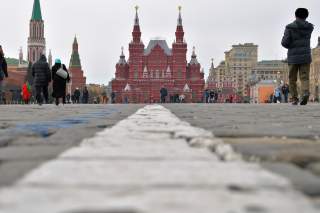 I was in my room at the famed Metropol Hotel in Moscow, Russia, next door to Red Square. It was April 2005 and I was preparing for a training workshop in advanced communication skills the following morning for personnel at the U.S. Embassy.

Built in 1905, this five-star, czarist-style lodging house historically had borne testimony to some of Moscow’s most intense chapters in history. The hotel is known for its glamour, for its use as a barracks during the Bolshevik Revolution, and for guests who were writers (including George Bernard Shaw), artists, mobsters, celebrities, and spies. The KGB monitored all visitors from outside the Land of Reds.

Pope John Paul II had died eight days before my arrival at the Metropol. Watching the funeral Mass in my room, it was clear that the much-beloved and well-traveled polyglot pontiff was a religious rock star for the Catholic Church and all of Christianity.

I was pleasantly surprised that the live broadcast of the funeral was allowed.

My thoughts turned to song, worship, and prayer. It was a habit to carry my Bible to every country I visited, as my spiritual security blanket. Although 70% of Russians proclaim Christianity (Orthodox), as an American I would be banned by Russia (and perhaps now labeled a terrorist) if I were seen in public with my Bible, prayed openly, or overheard singing, “It Is Well With My Soul.”

Before my workshop began the following morning, I was briefed by the political and cultural attaches. They strongly advised that, unless I were accompanied by someone from the U.S. Embassy or someone I knew well, that I not be out alone at nightfall.

There had been a surge of skinhead violence, I was told, but there would be no due process as in the U.S. to help or support an American citizen like me should a hate crime be committed against me.

This information unnerved me.

But after seeing skinheads in Red Square in broad daylight in the middle of the week, what was on my mind was to ask about the Seventh-day Adventists and Protestants and their religious liberty, and what the U.S. was doing to advocate and defend their human rights. (Tolerance is low for the Seventh-day Adventist Church in Russia; after 102 years, its members have not had an easy time in that country.)

As a Seventh-day Adventist myself, religious liberty in our country and worldwide is a high priority for me. “Proclaiming and defending the God-given gift of religious freedom,” the church teaches, is a human imperative framed by the First Amendment.

Growing up in the church, I, like other members, would receive updates on religious freedom on the Sabbath from almost anywhere in the world. As a young girl, I listened to the mission story shared from the pulpit.

Vividly harrowing stories were told about men, women, and children who were jailed, threatened with death, or killed for proclaiming the Gospel, witnessing, or reading a Bible.

Even if the Russian Constitution claims to “provide for freedom of religion, equal rights irrespective of religious belief, and the right to worship and profess one’s religion,” in practice these rights just don’t exist.

I imagined Russian government officials finding my Bible in my hotel room, perhaps with a hidden camera spying on me, since I was in Moscow working under the George W. Bush administration as a contractor. Having my Bible with me would be prohibited “extremist” activity for a Seventh-day Adventist.

I was an American citizen in the former Soviet Union, where freedom of religious expression could be met with official persecution and social hostility.

Years later, in 2011, I went to a Seventh-day Adventist church in Dubai, United Arab Emirates, with my Bible in hand. Beyond Christianity, American values and the priority of spreading public diplomacy and religious tolerance have influenced the United Arab Emirates and the nation of Qatar.

Both Islamic republics established Islam as the official national religion. Both governments, currently at diplomatic odds with each other, have erected large Catholic and Protestant churches.

Officials say the United Arab Emirates serves about 1 million Christians. Dubai has a synagogue. Ahead of the 2022 FIFA World Cup in Doha, Qatar, arrangements are being made for visiting Jews to have kosher food and places to worship.

These embraces are big steps toward religious acceptance.

Beijing accused the U.S. of using Christianity to control and “subvert” the government. Other countries of grave concern to the U.S. when it comes to religious freedom are Burma, Eritrea, Iran, Pakistan, North Korea, Sudan, Saudi Arabia, Tajikistan, and Turkmenistan.

The development of related language in our country’s National Security Strategy is central to the Trump administration’s foreign policy, as well as statements and activities led by high-level officials such as Secretary of State Pompeo, who last summer headed the second Ministerial to Advance Religious Freedom.

Over the past 20 years, the National Security Strategy has more boldly acknowledged the crucial link between religious freedom and national security.

“The current NSS states that the United States will continue to champion American values and rights to include our first freedom, religious freedom,” the Rev. Daniel Moke wrote in April for Religious Freedom Institute, then quoted from the 2017 document:

The United States also remains committed to supporting and advancing religious freedom–America’s first freedom. Our Founders understood religious freedom not as the state’s creation, but as the gift of God to every person and a fundamental right for our flourishing society.

The Trump administration is to be applauded for taking on the cause of Jehovah’s Witnesses. Russia views Jehovah’s Witnesses as “extremists,” jailing members of the faith, banning their “Awake” pamphlets, raiding homes, seizing personal property, and subjecting them to forceful interrogation.

This Thanksgiving, I will join millions of Americans who will reunite with their families and sit down to a delicious, mouth-watering feast.

Many others, like me, also will go and serve homeless families a Thanksgiving meal.

Regardless of religious belief or faith, families will openly pray, meditate, give thanks, say special remarks, or read Scripture. All done without penalty, punishment, or prosecution.

It’s critical to absorb that the bedrock of our democratic republic is first entrenched in the “live free or die” notion of religious liberty.

The freedom to express and worship without oppression started with the Pilgrims–the first comers from England who established the Plymouth colony in 1620 in present-day Massachusetts. These men and women were religious separatist insurgents-turned-refugees, fleeing the Church of England.

The first Thanksgiving in the American tradition occurred in 1621. Members of the Wampanoag tribe taught the English settlers how to survive.

The Pilgrims became the forerunners to Thomas Jefferson’s Statute for Religious Freedom in 1786, and to James Madison’s writing of the First Amendment in the Bill of Rights in 1789.

We are the first nation in history to fully articulate, adopt, and actualize these principles. We have a zeal to see the American ideal flourish in countries that repress their people who desire to freely worship and to proclaim their religion without harm.

Our religious freedom is a moral obligation to the world. It is just. It is what President Ronald Reagan said makes us uniquely exceptional at home and abroad, as a “shining city upon a hill whose beacon light guides freedom-loving people everywhere.”

Yvonne Renee Davis is a foreign policy contributor for The Daily Signal. During the George W. Bush administration, she served as a contractor for the State Department and a speaker for the Speaker's Bureau. Her article first appeared in the Daily Signal in 2019.