There Is No Equivalence in How Hamas and Israel Wage War 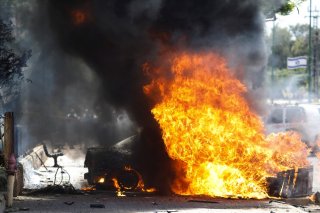 Israel is one of America’s staunchest allies, a beacon for democracy struggling to do right while surviving in a tough neighborhood. Hamas is a U.S.-designated terror organization, a thuggish kleptocracy whose only language is violence. But follow the conversation unfolding in the halls of Congress, on the pages of the world’s most respected media outlets, and among the innumerable hot takes on Twitter, and one could be forgiven for believing it’s the other way around.

Take, for instance, the stark difference in how the two actors wage war.

When Israel launches airstrikes in Gaza, it is to neutralize militants, weapons caches, and rocket launchers. The Israel Defense Forces take the extraordinary and unprecedented step to send text messages, make phone calls, and drop leaflets to warn civilians to evacuate, compromising the element of surprise in order to minimize casualties. Tragically, some civilian casualties are inevitable. And when there are operational mistakes, rigorous and transparent investigations seek to address the root cause. As an American who served as a combat soldier and commander in the IDF, I can attest to the importance the military places on its code of ethics and international law.

Conversely, when Hamas fires rockets indiscriminately at cities across Israel, every single projectile is intended to murder and terrorize Jews. When Hamas releases booby-trapped party balloons across the border into adjacent towns, they are meant to maim and kill curious Jewish children. And when Hamas operates out of hospitals, schools, and mosques, it is committing a war crime. Yet Hamas knows it scores a tactical victory if Israel hesitates to retaliate, and a public relations victory if Israel does not.

Rare is a dichotomy in warfare so clear. Yet these days, truth is under siege. New voices in Congress now accuse Israel of murdering Palestinian children. Israel is the terrorist, if you are to believe Congresswoman Ilhan Omar and her boosters on Twitter. And in a New York Times story published last week, one of the paper’s Middle East correspondents even credited Hamas with “ingenuity” for its ability to manufacture rockets.

What about how Jews and Palestinians respectively treat members of the other ethnic group?

There are nearly two million Palestinian citizens of Israel with full civil rights and one of the region’s highest standards of living. At about 20 percent of the country’s population, they serve as ministers in government, justices on the supreme court, anchors on television, and are present in just about every other facet of Israel’s pluralistic society.

(A narrative emerged in recent weeks that Israel was unlawfully trying to evict several Palestinian families from the Sheikh Jarrah neighborhood in Jerusalem to pave way for Jews. But as legal scholars Avi Bell and Eugene Kontorovich have compellingly demonstrated, the discrimination in this affair actually runs in the opposite direction.)

Hamas, meanwhile, is a genocidal, anti-Semitic, homophobic organization whose founding charter calls for the elimination of the Jewish people. A Hamas leader recently called upon Palestinians to buy knives and cut off the heads of Jews. Things aren’t much better under the Palestinian Authority (PA), where the sale of land to Jews is punishable by death. PA President Mahmoud Abbas has gone on record saying he does not want “a single Israeli” living in a future Palestinian state. State media and textbooks notoriously espouse anti-Jewish stereotypes.

Read the news or open your newsfeed these days, though, and guess which side is painted as the ethnic cleanser? Israel. Chelsea Manning and Susan Sarandon, who together have well over a million followers on social media, took to Twitter to denounce Israel’s ethnic cleansing. The Daily Beast, MSNBC, and Washington Post elevate voices that do the same. Extending the nonsense, the BuzzFeed books editor, an MSNBC columnist, and politicians across the West actually accuse Israel of genocide. Not only are these accusations completely unmoored from reality, they are also in fact the opposite of what is true.

How could this be? How can such a backward narrative be elbowing its way into the mainstream?

It’s hard to miss the parallels with the emergent woke ideology, which correlates power with evil and powerlessness with virtue no matter how inappropriate the fit. Israel is powerful relative to the Palestinians. That's all you need to know. Every other detail of this conflict is then rammed through this false paradigm until terrorism is justified, self-defense is excoriated, anti-Semitism is excused, and propaganda becomes fact. Israeli Jews become the white colonizers and Palestinian Muslims the brown colonized. Nevermind that Jews are indigenous to the Land of Israel; Israel emerged as a consequence of decolonization; the goal of Zionism has always been self-determination rather than economic exploitation; and the majority of Israeli Jews are actually brown, having escaped persecution at the hands of Muslim states.

Of course, as with any conflict, there is always room for a more nuanced discourse. Israel is far from perfect, and one must not paint all Palestinians with the same brush. But at a time when the public square is being polluted with lies, this moment calls for moral clarity, not equivocation.

Zach Schapira is executive director of the J'accuse Coalition for Justice. He previously served as a deputy platoon commander in Israel's Special Air Forces. Twitter: @zachschapira.

Image: Cars go up in flames after a rocket launched from the Gaza Strip landed nearby, in Ashkelon, southern Israel May 11, 2021. Reuters/Nir Elias.