Before There Was Top Gun a RAF Pilot Once Buzzed Parliament, Flew Through Tower Bridge 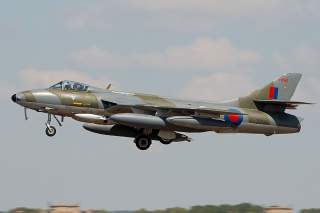 As the oldest air force in existence, the British Royal Air Force (RAF) has a reputation for being some, of the best and brightest the world has to offer. From innovation in aerial combat techniques to steadfast courage against all odds in Britain’s “finest hour.”

The RAF is also known for uniquely “British” cases of extraordinary situations, including a dazzling show of protests when its pilots felt the government was not giving the force the attention it deserved.

Flashback to 1968, when the United Kingdom was in a bit of a financial crisis. While the US military was getting the very best in technological upgrades and funding during the height of the Vietnam War, her British military cousins were not so fortunate. In fact, British Parliament felt it fit to treat the military like the red-headed stepchildren of the Isles, going so far as to completely dismiss the idea of celebrating the 50th anniversary of the good ol’ RAF with a fly-over: You know, the very armed forces branch that only twenty years and change prior had saved London from total destruction in World War II.

To make matters worse, the British government had all but outright neglected the RAF, which was frequently overlooked as the British defense industry began looking towards guided missiles as the weapon of the future, leaving pilots and aerospace industry workers nervous about the future.

Naturally, this would not stand for many RAF pilots, who grumbled under their breath and gave scowling looks of disapproval. However, the Brits are known for their stoic and stiff upper lips in times of hardship, opting to go the gentlemanly route instead of lashing out in outlandish ways.

Well, most of them, anyway. Flight Lieutenant Alan Pollock was most certainly not “most of them.”

On April 5, Pollock took off in his Hawker Hunter FGA.9, a low-level fighter/attack aircraft assigned to the No. 2 (Fighter) Squadron, his wheels leaving the ground of RAF Tangmere in Sussex (a base that had become legendary during the Battle of Britain and, at the time, had been recently designated to be deactivated).

Although Pollock had been ordered to fly in formation with his flight, he immediately broke formation and streaked towards London at low level, a man on a mission to give the British government a unique protest, and a fitting display for the RAF’s half-century of existence. At the time, he had only an AA map of London for navigation reference, complete with a marked route.

Turning off his radio (and giving a coded message that his radio was broken), Pollock’s first stop was the Dunsfold Aerodrome, where Hawker Hurricanes were made and tested. He pitched his stick down and descended to a low level, “beating up” the airfield with an extremely low pass to remind all who worked there why their jobs were important.

After giving Dunsfold a hurrah, Pollock began his “attack” on London, displaying airmanship that would be considered top-notch by any aviator in the world. Flying below the rooftop level over the Thames river, he began a three-circle orbit of the Houses of Parliament, rattling windows and reminding the politicians inside that the British still had an air force.

“I put the power on then. I thought: ‘Stuff it, let them hear some noise!’” he later told British tabloid Daily Mail. “The funny thing was that at the time, they were discussing noise abatement.”

Breaking contact, Pollock (who by this time knew he would likely never fly again), soared low towards the Royal Air Force Memorial and wagged his wings in salute before streaking towards the Tower Bridge, an iconic landmark of the UK. As he closed in on it, he noticed a red double-decker bus crossing it and made up his mind.

“Until this very instant I’d had absolutely no idea that, of course, Tower Bridge would be there,” Pollock later recounted. It was easy enough to fly over it, but the idea of flying through the spans suddenly struck me. I had just ten seconds to grapple with the seductive proposition which few ground attack pilots of any nationality could have resisted. My brain started racing to reach a decision. Years of fast low-level strike flying made the decision simple.”

Gripping his controls, Pollock flew under the upper span, in what was likely one of the most breath-taking (and un-photographed) sights in aviation history.

Now absolutely certain that he would be grounded, Pollock decided to go out with a bang, “beating up” three more airfields on his way back to Tangmere. During his joyride, he flew inverted at an altitude of 200 feet, enjoying every moment of his final flight.

Landing at Tangmere, Pollock burned his map -to avoid revealing the incident was planned- and called his mother before he was formally arrested by Flying Officer Roger Gilpin.

“It was worth flying over London, even if I was going to get court-martialed,” Pollock said.

While the RAF put him under close arrest and psychiatric hold for two days, his colleagues in the RAF and members of the public began to send him congratulatory letters and gifts, including a barrel of beer from British Airline BOAC.

The House of Commons also showed their support, with six Members of Parliament (four of whom being ex-RAF), backing Pollock up.

“I left on a high point and I was so lucky to be flying such a magnificent aircraft as the Hunter,” he said. “The RAF is the best career you can have.”

After leaving the RAF, he worked for Ford and a fire engine producer. In the 1980s, he was formally exonerated by the Royal Air Force.

Pollock created several records that day, with at least one of them still standing in his name.

In April of last year, Pollock celebrated the 100th anniversary of the RAF on the ground- but his heart remained in the sky, where it’s always been.