Is There a Way Out of Afghanistan’s Economic Nightmare? 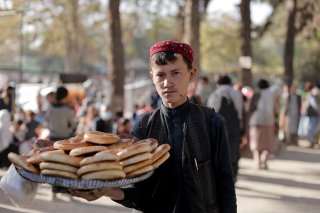 In its recent report, the World Bank has estimated that Afghanistan’s economy ‘faces critical challenges’ in which the country’s total Gross Domestic Product (GDP) is projected to contract further, with an accumulated contraction rate of around 30-35 percent between 2021-2022, in addition to having no improvements in per capita income. Moreover, since the re-establishment of the Taliban administration in 2021, Afghanistan has received around $1.8 billion in humanitarian aid from the international community. The United States has provided $1.1 billion in funds to assist the Afghan people during these tumultuous times. However, through relevant agencies of the United Nations, donor countries continue to provide aid to Afghanistan. Yet, despite this assistance, the Afghan communities continue to live in dire conditions accompanied by acute food insecurity, rising food prices, drought, and a lack of jobs.

Since the Taliban forcibly retook power in Kabul, the flow of humanitarian aid, provided primarily by the United States and European countries, has not effectively addressed the deepening economic dilemma of Afghanistan. According to UN calculations, twenty-five million people need urgent assistance, showing an increase compared to 18 million people from last year’s economic meltdown in Afghanistan. Public hospitals are also running out of medicine, and people, particularly children, have been infected by epidemic diseases such as cholera, measles, and malaria throughout the Taliban rule. Meanwhile, private investment has been fleeing the country. Because of economic hardships, no external financial support subsidizing private enterprises, and the reinvestment reluctance of investors and businessmen, the Public Private Partnership (PPP) status is at a zero level. These all have exacerbated the public mindset greatly.

The torn case of the Afghan economy substantially originating from the Covid-19 pandemic, political impasses, massive corruption by elites, and lingering insecurities in Afghanistan in 2020 continued to undermine the country’s economic growth. With the increased insecurity and the scheduled withdrawal of NATO and U.S. forces from Afghanistan in 2021, the country’s economy started to decline further, encompassing a wide gamut of critical areas and industries, such as education, health, investment, and trade, impacting daily living and the productivity of markets. Foreign organizations also steadily reduced their activities in Afghanistan and closed their missions in different working areas before the complete withdrawal of Western forces.

U.S. sanctions and the central bank’s $9.3 billion in frozen assets contributed to the economy’s sharp decline, resulting in the restriction of the Afghans’ interactions and engagements with the rest of the world. Sanctions and a weakened economy have intensely affected many people in Afghanistan. Some have reportedly resorted to selling their organs and children to buy food, and some even committed suicide. Furthermore, the massive flow of Afghan refugees to neighboring and western countries reflects the increasingly troubled economy, persecution, insecurity, and, more importantly, the ambiguous future of the country under the rule of the Islamic Emirate of Afghanistan (IEA).

Although the Islamic Emirate of Afghanistan (IEA) announced its annual budget for the first time in May, this year essentially rests on collecting national revenues and a significant dependency on coal exports to Pakistan for funding. However, more is needed to address the current economic catastrophe and the challenges ahead. Rising global prices coupled with Afghanistan’s crumbling economy after Russia’s war in Ukraine exacerbated Afghans' social and economic conditions due to increasing inflation. The facts on the ground illustrate that many families will continue to suffer and endure poverty and food shortages if they do not receive considerable attention. In the latest Global Hunger Index 2022, Afghanistan ranks 109 out of 121 countries and has fallen six spots signaling a precarious future.

The Taliban has still not achieved international recognition because it has not met the pledges made to the international community concerning human rights, women’s rights, and inclusive governance in Afghanistan. It has also created domestic dissatisfaction with the Taliban and significant trauma to national legitimacy. Therefore, non-recognition has inevitably resulted in Afghanistan being internationally isolated along with critical trade curbs, banking systems fallouts, and constrained people-to-people contacts, all a considerable blow to the already weakening economy of Afghanistan.

Notwithstanding the improved security after the Taliban takeover, the Islamic State Khorasan Province (ISKP), an opposing group to the Taliban, has become a dominant and rising threat to Afghanistan’s security and stability, killing 700 and wounding 1,406 Afghans by carrying out bombs and suicide blasts coinciding with the Taliban’s rule. Such insecurity and threats have triggered apprehensiveness throughout all classes of Afghan society, particularly the wealthy businessmen, traders, and investors who show no interest in investing in Afghanistan’s private or public sectors. More importantly, Afghanistan has become ignored after the asymmetric media attention given to Russia’s war in Ukraine and the burgeoning ‘Great Powers Competition’ coming along with it.

Despite the supply and delivery of humanitarian aid to Afghanistan, the people continue to experience acute food insecurity and economic tensions. It implies that foreign assistance for Afghanistan’s people has been temporarily advantageous but not effective enough to resuscitate the devastating socio-economic conditions of the country. Hence, the international community should consider a unified, consistent, and balanced mechanism to address and encompass Afghanistan's multi-dimensional challenges. Such potential models include developing community-based small and large projects in sectors such as health and education and subsidizing private enterprises through UN-affiliated agencies. Permitting foreign investment would be an effective and helpful approach that would create job opportunities for laborers instead of humanitarian assistance. Such microeconomic and grassroots techniques will actively help poor people to have income for their families.

In this regard, rather than China and Russia providing diminutive humanitarian assistance, the United States and European countries can play a more significant role in financing Afghans. This strategy will allow for a further loosening of the Taliban’s draconian laws and motivate them to uphold principles towards engagements. Accordingly, proactive engagements through efficient diplomatic channels and other interactions with the Taliban are critical to compelling the Taliban to abide by the pledges made to the international community for the prosperity and development of Afghans. Otherwise, there is a possibility of a further downward spiral reaching more instability, emerging threats, the spread of extremism under religious beliefs and ideology, and opium poppy cultivation that can spill over throughout the world.

Masom Jan Masomy is an assistant professor at the Regional Studies Centre, Afghanistan Academy of Sciences in Kabul, Afghanistan. He writes about Afghanistan, Central Asia and South Asia.