These 3 Charts Show Why America's Economy Is Doing Well 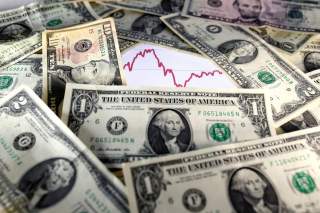 Democrats, at least the ones running for president, remain dismissive of the American economy and its record-long expansion. Joe Biden says the American middle-class is “getting crushed.” Elizabeth Warren’s preferred descriptor is “hollowed out.” And Pete Buttigieg says that the folks back in South Bend, Indiana, “aren’t measuring the economy by how the Dow Jones is doing, they’re measuring the economy by how they’re doing.”

But as every month passes and more jobs get created and real wages continue to rise, such campaign positions look a bit sillier and the candidates a bit more disconnected. At some point — assuming the expansion enters its 12th year next summer — Democrats might need to abandon their old playbook, the one that tells them to run against Republican presidents during good economics times by complaining about inequality.

And if there’s one statistic making a hash of the inequality argument it’s this one: Not only are wages rising, even adjusted for prices, but they’re rising fastest for those at the bottom. In an analysis for The New York Times, Evercore ISI economist Ernie Tedeschi calculates wages for the bottom third of workers have risen at a 4.1 percent annual pace over the past two years vs. 3.3 percent for the middle third and 3.6 percent for those at the top. (Keep in mind that inflation, at least according to the preferred measure of the Federal Reserve, is running about 1.5 percent.) Some other calculations show similarly strong gains for those at the bottom.

Anyway, there’s a good chance that Mayor Pete’s constituents are doing OK, even setting aside the area’s low 3.5 percent jobless rate. But isn’t this just a story of higher minimum wages at the state level? Only in part, perhaps. Tedeschi: “As the analysis has shown us, wage growth at the bottom is doing well. It has been around 4.1 percent over the last two years — above the 3.6 percent at the top end, and above the overall average of 3.9 percent. But absent the pressure from minimum wage workers, growth at the bottom would have been closer to 3.3 percent.” And this chart from the piece:

A recent analysis from the Atlanta Fed also undercuts the strong version of the minimum wage explanation, as displayed in this chart: