With These 5 Weapons, Nazi Germany Was Almost Unstoppable 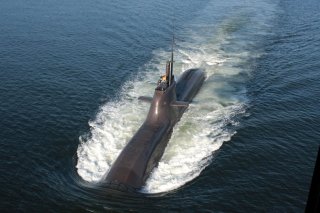 Here's What You Need to Know: The Panzerfaust made anyone—even old men and children dragooned into the German Army late in the war—a potential tank killer. The introduction of this new short-range, last-ditch weapon made Allied tank crews more cautious around German infantry that did not appear to have strong antitank defenses, such as towed guns.

The forces of Nazi Germany in World War II were some of the most formidable fielded in any war. Backed by German science, engineering and modern mass-production techniques, it was a new type of highly mechanized warfare. Faster paced and deadlier than the armed forces that fought in the Great War just twenty years before, it overwhelmed slower-moving enemies and helped Germany subjugate an entire continent. Here are five examples of German war technology that very nearly ended Western civilization as we know it.

The tank’s modern reputation as a fast, hard-hitting, deadly war chariot is largely due to the German Army’s use of the tank in the early years of World War II. Although first invented by the British in World War I, the Wehrmacht and SS took the tank to its logical conclusion, in doing so swinging the pendulum of war from defense as the dominant form of warfare back to the offense.

Although the bulk of German tank forces was composed of smaller tanks such as the Panzerkampfwagen III and IV, the Panzerkampfwagen VI—or Tiger tank—was designed to be the decisive factor on the armored battlefield. At fifty-four tons, it was considerably larger than contemporary tanks, and together with its thick armor and eighty-eight-millimeter main gun, made the Tiger a so-called “heavy” tank. Introduced in 1942, the Tiger’s KwK 36 gun could gut any mass-produced Allied tank built during the war, and the tank’s thick armored hide could shrug off most Allied antitank rounds.

Tigers were organized into heavy tank battalions and deployed by German Army commanders where they were needed the most. As a result, unlike other German tanks which prioritized protection and mobility over firepower in a general offensive, the Tiger emphasized firepower and protection over mobility, as it typically had specific objectives in mind.

The Messerschmitt Bf 109 was hands down the most lethal fighter of the Second World War. Designed by legendary aircraft designer Willy Messerschmitt in the mid-1930s, it replaced a grab bag of forgettable interwar German fighters with a fresh design that included a monocoque airframe, retractable landing gear and a closed cockpit.

Early Bf109A models served in the Spanish Civil War. By the late thirties, German rearmament was in full swing and the Me109 became the main fighter of the fledgling Luftwaffe. Fast and maneuverable, it was also hard hitting, featuring two .51-caliber heavy machine guns and one twenty-millimeter cannon.

The Bf109A and the Luftwaffe served all over Europe, North Africa and European Russia, dominating all other air forces until 1943 with the exception of the Royal Air Force. The Bf109 and its wartime variants had the most serial aces of the war, including pilots such as Adolph Galland, Werner Molders and Johannes Steinhoff. Overall, 33,984 Bf109s of all kinds were built by German and Czech factories. Ironically, a variant of the Bf-109, the Czech Avia 199, served with an embryonic Israeli Air Force in the late 1940s.

The crew-served machine gun was a major contributor to the high death rate of World War I, and the interwar German Army, though small, ensured it had highly effective machine guns to help it punch above its weight. The MG-34 machine gun, adopted in 1934, was lightweight, had an extremely high rate of fire of up to 1,200 rounds per minute, and was capable of quick barrel changes on the battlefield—a must for an infantry-support machine gun.

Unfortunately, the MG-34 was built made more like a watch than a battlefield weapon, and as a result manufacturer Rheinmetall could not keep up with demand. The MG-42, introduced in 1942, was an attempt to simplify the design into something that could be more easily mass-produced, and ultimately four hundred thousand were produced. The MG-42’s high rate of fire proved highly beneficial in defensive battles, particularly strongpoints backed up by mobile reserves on the Eastern Front.

German small arms doctrine held that the MG42—not the infantry weapon—was the foundation of infantry firepower. The infantry, armed with slower-firing Karabiner 98k bolt-action rifles, supported the machine gun. By contrast, the U.S. Army placed less emphasis on machine guns, fielding fewer of them than a comparable German unit, while at the same time increasing overall firepower with the semiautomatic M1 Garand and the M1918 Browning Automatic Rifle.

The German Navy (Kriegsmarine) in World War II was not the dominant arm of the German military. There would be no repeat of the German High Seas Fleet. As a result, it had to focus its limited resources on what was most effective its traditional maritime foe, the Royal Navy. While the response to the French Navy was the German Army, fighting the United Kingdom required a naval response.

But without capital ships, how would Germany take the fight to the Atlantic? The answer was the Unterseeboot, or U-boat submarine. U-Boats had been highly successful in World War I, and the Kriegsmarine heavily reinvested in them in World War II. This again proved successful, with U-boats sinking 2,779 Allied ships totaling 14.1 million tons between 1939 and 1945. The most successful U-boat, U-48, sank fifty-one ships. That translated to 306,874 tons of Allied shipping—the equivalent of three modern Nimitz-class aircraft carriers.

Not only did the U-boat campaign force the Allies to slow the flow of troops and war materials across the Atlantic and organize shipping into convoys for protection, it also affected the British civilian population, which suffered chronic shortages of foodstuffs and other goods. Initially powerful, U-boats were eventually nullified by Allied countermeasures and ultimately failed to sever lines of communication between North America and western Europe. Germany’s submarine force lost heavily—765 U-boats were lost during the course of the Second World War.

Germany’s use of masses of tanks on the modern battlefield opened Pandora’s box. Within a few years Allied forces would be returning the favor and it was suddenly the German Army that was facing large numbers of British, American and Soviet tanks. As the quality of German forces declined and the number of Allied forces went up, the Wehrmacht had a need for a cheap, inexpensive way to saturate the battlefield with tank-killing firepower. The result: the Panzerfaust.

The Panzerfaust was incredibly simple for an effective antitank weapon. A single-shot, recoilless weapon, it featured a large, egg-shaped warhead attached to a disposable metal tube. The primitive trigger ignited the black powder propellant, sending the warhead to an effective range of thirty yards. The shaped charge warhead had an astonishing penetration capability of up to 7.9 inches, making it capable of destroying any Allied tank.

The Panzerfaust made anyone—even old men and children dragooned into the German Army late in the war—a potential tank killer. The introduction of this new short-range, last-ditch weapon made Allied tank crews more cautious around German infantry that did not appear to have strong antitank defenses, such as towed guns. During the Battle for Berlin, some Soviet tankers even welded bed springs to their tanks, in hopes that prematurely detonating the shaped charge warhead would save their tank—a tactic the U.S. Army used decades later with so-called “slat armor” on Stryker armored vehicles.

This article first appeared several years ago and is being reprinted for reader interest.