These 7 Democrats Floated Fake Russiagate Stories. Now They Get To Quiz Mueller 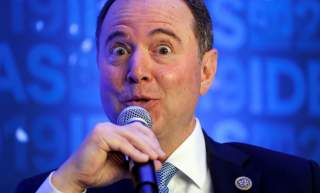 When Robert Mueller appears Wednesday before two congressional committees, he will face questions from at least seven Democratic lawmakers who have floated false claims about various aspects of the Russia probe, all without issuing retractions once the stories were debunked.

And Adam Schiff and Jackson Lee also jumped on a Jan. 17 story published by BuzzFeed that alleged Trump directed Cohen to lie to Congress in 2017 about his work to build a Trump Tower in Moscow. In a rare move, Mueller’s office issued a statement saying that the story was false.

All of the lawmakers will be present Wednesday when Mueller appears before both the House Intelligence and House Judiciary Committees to discuss his investigation into whether the Trump campaign worked with the Russian government to influence the 2016 election.

During Mueller’s 22-month long investigation, Democratic lawmakers appeared frequently on cable TV and spoke out on Twitter to seize on the latest development in Russiagate. Often, the stories the lawmakers circulated were later debunked by additional reporting, or by the Mueller report itself.

Here is a non-exhaustive list of Democrats’ greatest flops:

Cohen touted a McClatchy report published on Dec. 27, 2018 that alleged Cohen visited Prague during the campaign. If accurate, the story would have backed up one of the most serious conspiracy allegations in the Steele dossier, which the FBI used to obtain wiretap warrants against former Trump campaign adviser Carter Page.

In the dossier, former British spy Christopher Steele alleged that Cohen visited Prague in August 2016 to meet with Kremlin officials to arrange paying off hackers.

“[I]s the Steele (stet) door closing in?” Cohen asked in a tweet linking to the McClatchy piece.

Cell signal puts Cohen outside Prague around time of purported Russian meeting https://t.co/7t3o7QhPOy is the Steele(stet) door closing in?

Cohen had long denied Steele’s allegation, but Trump critics held out hope that it was accurate. Those hopes were dashed with the release of the special counsel’s report.

The report cited Cohen’s statement that he has never visited Prague. Cohen himself has testified to the House Intelligence and House Oversight Committees that the dossier’s claims about him are false.

Lieu also circulated the inaccurate McClatchy report, which now includes an editor’s note acknowledging the special counsel’s findings. In a tweet linking to the article, Lieu asserted that information about Cohen’s alleged trip to Prague was being leaked “because the Steele Dossier has lots of truth.”

GOP & @realDonaldTrump used Michael Cohen’s denials that he was never in Prague to cast aspersions on the damning Steele Dossier, which stated Cohen was in Prague meeting with Russians in 2016.

Why are folks leaking this info? Maybe because the Steele Dossier has lots of truth. https://t.co/dgesvmOlN6

Other aspects of the dossier have crumbled in the wake of Mueller’s report. Steele, who investigated Trump on behalf of the Clinton campaign and DNC, alleged that the Trump campaign engaged in a “well-developed conspiracy of co-operation” with the Russian government. But Mueller’s report said that investigators could not establish that a conspiracy occurred, and did not find that any Trump associates acted as agents of Russia.

The Texas Democrat tweeted out a link to an April 13, 2018 story that said Mueller’s team was given evidence showing that Cohen’s cell phone pinged off of towers near the Czech Republic capital.

“How soon before we learn that he was in Prague to meet with Russians about coordinating with the Trump Campaign?” Jackson Lee asked.

Cohen vehemently denied ever being in Prague, now we learned that he was lying. Another item in the Steele Dossier confirmed. How soon before we learn that he was in Prague to meet with Russians about coordinating with Trump Campaign? #TrumpRussia @HouseJudDems @HouseDemocratshttps://t.co/gtpq9abgdk

Lee circulated another false story that furthered the collusion narrative. She claimed in a tweet on July 12, 2018 that Donald Trump Jr. “was communicating with Wikileaks’s Julian Assange about the timing of releasing emails designed to harm Hillary Clinton.”

“Nothing in Peter Strzok’s text messages changes the fact that Donald Trump Jr. was communicating with Wikileaks’s Julian Assange about the timing of releasing emails designed to harm Hillary Clinton.”https://t.co/WrMwndOBWH @HouseJudDems @HouseDemocrats #TrumpRussiaCollusion

The special counsel’s report cited no evidence that Trump Jr. or any Trump associates had direct communications with Assange. Trump Jr. did exchange several private messages with the WikiLeaks’ Twitter account, but none referred to the timing of the release of Clinton emails.

On Nov. 27, 2018, Quigley alleged in a tweet that former Trump campaign chairman Paul Manafort was guilty of “Lying to investigators, violating your plea deal, covering up secret meetings with Julian Assange.”

He appeared to be referring to a report in The Guardian that claimed Manafort visited Assange at the Ecuadorian embassy in London.

Paul Manafort is clearly gearing up for one of two possibilities: 1) life in prison 2) a presidential pardon. https://t.co/pGEoK1iiV6

Except the story appears to be completely inaccurate.

Both Assange and Manafort have vehemently denied the allegation, and no other evidence has appeared to back up the Guardian report. The special counsel’s report, which has several sections devoted to WikiLeaks, made no mention of a secret meeting between Assange and Manafort. The Guardian has somehow avoided commenting on the controversial report.

Speier was also snookered by the Guardian story.

Schiff has promoted several false story lines during the course of the Russia probe. In a March 20, 2017 congressional hearing, he cited several allegations from the dossier. He has also said he saw “more than circumstantial evidence” of collusion between the Trump campaign and Russian government.

On July 26, 2018, he cited a CNN report that claimed that Cohen was willing to testify to the special counsel that he witnessed a discussion between Trump and his oldest son, Donald Trump Jr., discussing an upcoming meeting with a group of Russians at Trump Tower in June 2016. The story would have been problematic because both of the Trumps have denied discussing the meeting before it occurred.

“The conspiracy case may have just gotten stronger,” Schiff wrote of the CNN report.

If allegation Trump ok’d June 9 meeting is true, it means he not only publicly appealed to Russia for help, but privately approved receiving it.

As forecast to Papadopoulos, that help would come in the release of Clinton emails. The conspiracy case may have just gotten stronger. https://t.co/7GULzPqkk4

The story soon fell apart as one of CNN’s sources, Cohen attorney Lanny Davis, admitted that he had provided inaccurate information about what Cohen witnessed. Cohen told Congress that he had suspicions that Trump Jr. told his father about the Trump Tower meeting, but that he had no solid proof to back it up.

Schiff also jumped headfirst into the fake news buzzsaw by latching on to a Jan. 17 story in BuzzFeed that accused Trump of explicitly instructing Cohen to lie to Congress in 2017 about the extent of his negotiations to build a Trump Tower in Moscow during the campaign.

“The allegation that the President of the United States may have suborned perjury before our committee in an effort to curtail the investigation and cover up his business dealings with Russia is among the most serious to date,” Schiff wrote.

The allegation that the President of the United States may have suborned perjury before our committee in an effort to curtail the investigation and cover up his business dealings with Russia is among the most serious to date. We will do what’s necessary to find out if it’s true. https://t.co/GljBAFqOjh