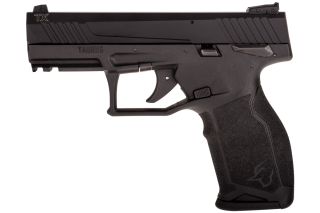 Key point: These are destined for a gun store near you.

The National Shooting Sports Federation’s annual Shooting, Hunting, Outdoor Trade Show—or SHOT Show for short—is the number one firearms industry event in America. Held every January in Las Vegas, Nevada, SHOT is a where the industry shows off its newest, most innovative designs. This year is no different, with new firearms destined for the civilian market debuting at the Sands Expo Center. Here are four standouts from this year’s show destined for a gun store near you.

Perhaps the most unusual—and mysterious—firearm to debut at this year’s SHOT show is Franklin Armory’s Providence carbine. Although the Providence appears outwardly identical to many AR-15-bsed pistol caliber carbines, internally the weapon is very different--and likely immune to some proposed gun control legislation.

The company bills the Providence as a non-semiautomatic weapon. Traditionally, semiautomatic in the world of firearms has meant that the gun will fire once with every pull of the trigger, using the energy from a fired round to eject the spent metallic casing and draw a fresh round while also recocking the action. Video seems to show a relatively normal-operating carbine. Although Franklin Armory is being tight lipped about how the gun actually works, the prevailing theory so far is that the weapon is similar in operation to a double-action revolver, with a pull of the trigger manually cocking the hammer, ejecting the spent cartridge, and resetting the bolt. This could mean a heavier, longer trigger pull than guns that use more traditional semiautomatic firing systems.

Franklin Armory claims the Providence was initially designed for European countries where semiautomatic weapons are banned, but the latest round of gun control legislation across the United States has included proposed semiautomatic firearm bans. In many cases, the Providence would likely skirt such bans.

The increasing popularity of precision rifle shooting, often using so-called tactical-style rifles, is causing more firearm manufacturers to join the fray. Daniel Defense, which made its reputation on the AR-15 platform, has announced its first bolt-action rifle, the Delta 5, to compete with industry giants such as Remington, Tikka, and Accuracy International.

The Delta 5, with the exception of the trigger, was designed from the ground up by Daniel Defense. The action is a short action available in 7.62 NATO, 7mm-08, and 6.5-millimeter Creedmor. The three-lugged bolt is made with a Sako style extractor. The only part designed and built outside of Daniel Defense is the trigger, a Timney Elite Hunter trigger with a 1.5 to 4 pound pull. Unique among bolt action firearms the Delta 5 features a user-replaceable cold hammer forged barrel, allowing the user to swap in and out barrels of different lengths and profiles.

The Delta 5’s action sits in a miniature aluminum chassis that accepts industry standard Accuracy International (AICS) magazines in both five-round and ten-round sizes. The rifle stock is made from carbon fiber-reinforced polymer, and features an adjustable length of pull courtesy removable spacers and a user-adjustable cheek rest. The stock also features a pistol grip and the M-LOK attachment system for attaching bipods and other accessories. The rifle has an overall weight of 9.5 pounds.

Daniel Defense claims the Delta 5 has a typical accuracy of .5 minute of angle (MOA), or approximately .5 inches at one hundred yards. The U.S. Army, by comparison, considers any precision rifle capable of one MOA—or 1.047 inches at one  hundred yards—a sniper weapon.

Taurus USA introduced a new .22 rimfire pistol at SHOT 2019, the TX-22. Like many gun manufacturers Taurus’ .22 line has been neglected a bit and the TX-22 is a generational leap over the company’s previous .22, the 22 POLY.

The TX-22 combines a modern look with a polymer frame,and sixteen round magazine. The pistol weighs just 17 ounces unloaded, with an overall length of seven inches and width of 1.25 inches. The 4.1-inch barrel is suppressor-ready, threaded for the common 1/2-28 thread pattern and shipping with a thread protector. The trigger pull is five pounds, about the same as a Glock, with a trigger safety.

The TX-22 disassembles easily, with a takedown lever on the left hand side allowing the slide to come off. The pistol also comes with adjustable white dot sights and a manual safety mechanism. Taurus is marketing the pistol for competition shooters, recreational shooters, home defense, and target shooting.

The Crackshot rifle is a single shot .22 LR rifle with a 16.5-inch barrel. The XBR version adds an upper chambered in .27 caliber that accepts blanks. The blanks propel sixteen inch aluminum bolts with approximately ninety-seven pounds of foot energy, giving the weapon a lethal range of up to seventy yards. The Crackshot XBR ships with a four-power optic with duplex reticle.

Traditions is marketing this as a hunting weapon with a particular emphasis on older or disabled hunters no longer capable of pulling back a bowstring-powered weapon. Interestingly, the use of a primer cartridge and front-loaded arrows has the ATF currently categorizing it as a muzzle loading weapon, which has different legal implications for owning and hunting purposes.