These are the Best Air Rifles of 2019 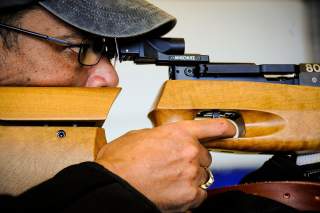 Well, the key difference is this: Traditional pellet guns or BB guns are rifles which discharge small, mostly innocuous BB’s or pellets. These guns are the ideal toy to tinker with when plinking in the backyard, but they don’t hold a candle to the far superior air rifle.

Recreational shooting has become a popular activity in recent years, particularly in the United States, and there are more gun options at your fingertips now than ever before.

Whether you’re in the market for an air gun or a starter pistol, there are plenty of selections to choose from. But if you’re looking for something that’s appropriate for small game hunting, you should look no further than the air rifle.

Tailored to small game hunting and target shooting alike, the air rifle will provide you with precision accuracy and a darn good time.

Perhaps you’re wondering what kind of air rifle to get or if there’s any significant difference between a pellet gun and an air rifle. All of these answers and more will be revealed as we break down the best air rifles available, how to properly maintain them and where to get your hands on my top picks.

Let’s start with the basics. What’s the difference between an air rifle and a pellet gun?

Well, the key difference is this: Traditional pellet guns or BB guns are rifles which discharge small, mostly innocuous BB’s or pellets. These guns are the ideal toy to tinker with when plinking in the backyard, but they don’t hold a candle to the far superior air rifle.

Where air rifles differ from pellet guns is in their fundamental operating system. Many air rifles are powered by CO2 cartridges which give each shot some serious force.

Others options are spring-powered rifles or PCP-powered (Pre-Charged Pneumatic) rifles, all of which beat the pellet gun for power and performance.

In fact, there are even ways to supercharge certain air rifles to increase the velocity of each pellet that you fire. Spring air rifles, for instance, work by propelling a spring into a locked position. Once released, the spring pushes a piston forward which forces the pellet out of your barrel with air pressure.

This immediate compression of air causes intense heat. These non-CO2-powered air rifles can be jerry rigged to enhance muzzle velocity by using common household items such as vegetable oil and paper towels.

Regardless of whether you decide to hack your air rifle, you should be able to see how they differ from standard pellet guns now. No pellet gun can make impact the way an air rifle can.

This is just the most obvious way in which the two differ. As you’ll see below, air rifles are disparate in several ways.

Most often than not, air and pellet rifles are lumped together, but the major difference is within the ammunition each carries. Air rifles can utilize BBs or Ball Bearing ammo.

It is a small steel sphere measuring 0.18 inches in diameter. For air rifles, this type of ammunition is more for recreational use.

It is suited for backyard fun and targeting small items. Due to the shape and material, the BB can ricochet easily and is not as accurate as the pellet gun.

Pellet guns are essentially air rifles that utilize pellets as ammunition. The Pellet evolved from the BB and contains a flat or round head followed by a taper to a skirt.

Due to its construction, the pellet’s lead head will drill in sturdily upon impact. The pellet’s aerodynamic shape makes it a far more accurate round compared to the BB. For that reason, the pellet gun is more suited for hunting vermin like rabbits, rats, raccoons, squirrels and hedgehogs. It also makes it more accurate for target practice.

Although the air rifle is far from rifles that shoot live ammunition, one must take into consideration how to maintain it, as they operate similarly. For more info on bullets and ammo in general check out our guide.

There are various types of air rifles to consider when purchasing one. We uncover three major types of rifles and the best in those categories.

Air rifles are divided into three major categories consisting of spring, PCP, and nitrogen powered ones. We will first cover the most basic version which is the spring piston powered rifle.

Spring powered rifles have been making a comeback in recent years and are the perfect air rifle to start one’s journey with. This type of rifle is a single shot and popular for hunting as they can shoot at high speeds.

We will be examining examples of break barrel rifles that are very easy to utilize. What makes this spring action rifle unique is the way the spring is cocked, as the user just needs to push the barrel downwards.

This primes the spring while the pellet is loaded, before flipping the barrel back up in a fixed position.

Once fired, the heavy spring pushes piston forward as the pellet is released through compressed air. Below, we have two examples of great spring piston guns to consider.

The Ruger Blackhawk Combo is a 0.177 caliber air rifle that shoots at 1,000 feet per second. That is a great deal of firepower which is perfect for small game hunting like rabbits and squirrels, pest control like rats and ‘coons, and target practice.

It includes a mount and 4×32 scope for targets over 200 feet. The all-weather stock is nice as it is more durable in numerous outdoor scenarios. The Ruger is a solid 7-pound weapon with great balance and cracks like a 0.22 weapon when fired.

The butt of the rifle contains great absorption when firing as it is a very well-balanced rifle. Also, it incorporates an automatic safety system when cocking the gun to load or reload. The safety is automatically turned on when one is cocking the barrel and loading in a new pellet.

This is a great feature for avoiding accidents or disasters. Other features include a parallax setting which can engage targets at 100 feet with ease. Some factors to watch out for is that the rifle needs initial cleaning as it can be over oiled.

After time, the scope mount may also loosen from extensive use. Overall, this is a great starter weapon to go hunting for small game or pests that is durable in outdoor conditions.

As a starter weapon priced well, the Ruger Blackhawk Combo air rifle is an excellent choice for a simplified air rifle.

The Varmint Air Rifle is another great alternative in the spring powered break barrel category. It is made in Spain and is a 0.177 caliber rifle firing at 1,250 feet per second.

Weighing in at just 6 pounds, the Varmint contains serious firepower as it is known for the loud sounds that blast out when fired. Gamo’s version also includes a built-in rail and 4×32 scope.

It’s got a nice design that considers the shooter when put into action. The stock is an all-weather material with a raised cheek piece at the end of the rifle.

This is to ensure maximum comfort when firing and is suitable for both left and right-handed individuals. Additional features such as the ventilated rubber butt, to take out recoil, and the grip having a checker anti-slip design making it a shooter’s rifle that is incredibly comfortable to use.

It also contains an automatic safety when cocking the gun to avoid accidents. The popularity of the Varmint Air Rifle comes from its accuracy and incredible stopping power. This is definitely a gun used for small game or pests in your surrounding area.

A few cons to consider include the scope as users have to zero in the optic from time to time. There is also a heavier cocking system which is rated at 30 pounds.

Otherwise, The Gamo Varmint Air Rifle is a great air rifle that is lightweight, contains incredible stopping power, and is comfortable to use at a low price. We personally love this rifle, hence why we included it on our air rifle review.

The Whisper Silent Cat is another model which utilizes the break barrel system. It is a 0.177 caliber rifle that is powered by a spring, providing a whopping 1200 feet per second.

The rifle is just a bit over 5 pounds and contains a comfortable modern skeleton with some great features. The stock is made of an all-weather material that includes a cheek pad and rubber butt padding for comfortability.