These Are the Biggest 'Guns' To Ever Fire a Shot 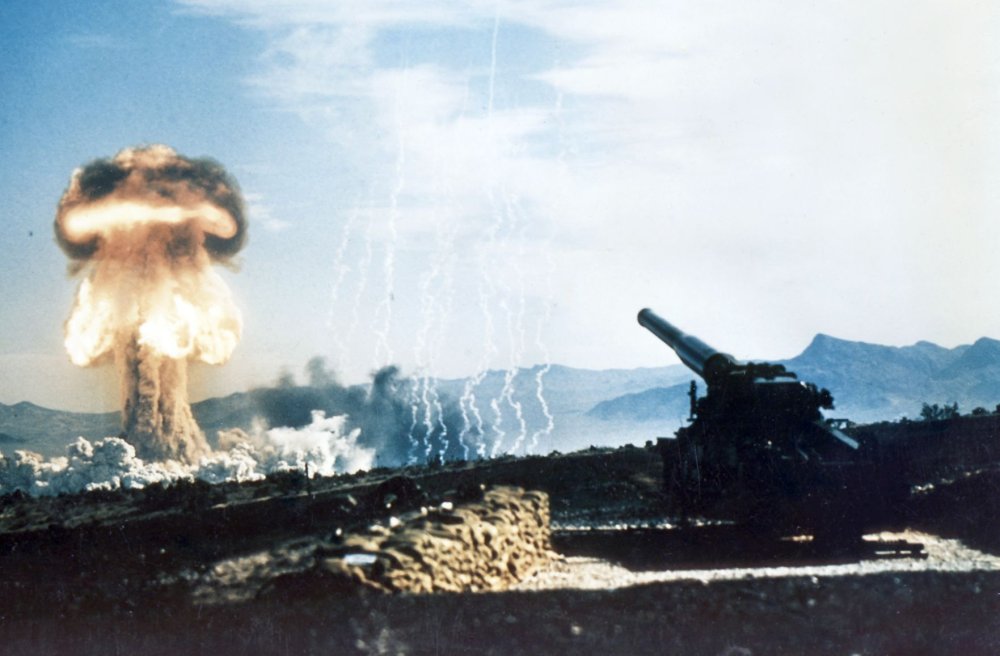 In 1453, after his artillery corps reduced the thousand-year-old walls of Constantinople to rubble, Sultan Mehmet II claimed the city for the Ottoman Empire. Europe named the metal tubes that fired projectiles “gunnildes,” which became “guns.”

As a quintessential high-end machined product, the large gun reached its pinnacle during the Industrial Age.

(This article by David Axe originally appeared at War is Boring in 2013.)

The Kaiser’s World War I “Paris Gun” captured the imagination with its sheer scale; its quarter-ton rounds pierced the stratosphere when lobbed 75 miles downrange into the Paris arrondissements.

Later during World War II the cities of Sevastopol and Leningrad were subjected to fire by the largest mobile artillery ever built: the “Karl” 23-inch mortar and the “Gustav” 32-inch railway gun.

Defenders hunkered in bunkers as four-ton shells the size of motorcycles crashed into buildings at supersonic speeds. Out in the Pacific, Marines on Guadalcanal and Japanese troops on Iwo Jima faced the business end of 14- and 16-inch naval rounds that generated small earthquakes on impact.

Such gigantic weapons were more for “shock and awe” psychological impact than practical military use. Just getting these giant guns to the fight took proportionally giant efforts; the Gustav Gun required its own custom railway to move around, while it took battleships and cruisers to carry the big naval rifles.

The Nazi regime’s V-3 “Channel Gun” was bombed before it got working properly in the waning days of World War II. Even before that the success of the V-2 ballistic missile had already begun closing the door on long-range artillery in the thinking of many military planners.

The guided missile’s advantages in speed, range and ease of deployment would eventually relegate the big gun to museum status, but there were several things that missileers had to get right first, like safe handling, accuracy and payload. Thus during the early Cold War some big guns still lumbered around.

Both the U.S. Army and Navy came out of World War II seeking roles on the new nuclear battlefield. The Army had begun development of a big mobile gun just before the Korean War, and that conflict accelerated its development.

The M65 280-millimeter Motorized Heavy Gun, better known as “Atomic Annie,” could be set up in 12 minutes, fire its atomic round, unship in 15 minutes and hit the road at 45 miles per hour, carried between its twin tractors. These numbers compare pretty favorably with the performance of modern missile transport-erector-launchers.

An atomic warhead had to be toughened and miniaturized to fit on a missile or in a gun barrel. The 280-millimeter shell was very small for a nuke, measuring only 55 inches long and weighing just 850 pounds. It used the same uranium-gun firing mechanism used in the Little Boy bomb dropped on Hiroshima — a system so simple it was deemed unnecessary to test it.

A uranium gun works the way it sounds: a “bullet” of fissile material is literally fired down a tube at a fissile “target”; on impact a supercritical mass is formed, a nuclear chain reaction occurs and the target is vaporized.

The Atomic Cannon was all-up tested just once — at the Nevada Test Site in the spring of 1953. An M65 sent its W-9 round seven miles down-range, where it exploded with a yield of 15 kilotons, a little less than that of Little Boy.

Film of the shot is still a crowd-pleaser, and some have suggested that the test and the announced deployment of M65s to Korea hastened the July 1953 armistice.

With 80 atomic rounds available and 20 M65s to shoot them at a rate of two or three per hour, the Army didn't need airplanes or missiles to wield the nuclear Big Stick.

The M65s were deployed in battalions of two or three guns apiece in Europe and Asia for about a decade before they were replaced by tactical nuclear missiles. One anecdote from a soldier with the 663rd Field Artillery Battalion stationed on Okinawa adds some some surprising details:

We fired from two old Japanese air bases, one at Yontan and one at Yanaberu, due to the fact that the concrete runways could handle the weight. … We used three radar units to track the shells and where they landed in the East China Sea, since binoculars were a strain at 35 miles! Prior to the arrival of the [atomic rounds], the Chinese navy would constantly come in to the three mile limit on Okinawa to show their strength. … After the gun arrived, we didn't see them again.

Not to be outdone, the Navy ordered its own nuclear rounds. The 16-inch W-19 “Katie” shells for the Iowa-class battleships' main batteries were derived from the Army's W-9 warhead and packed a greater yield. Fifty shells were stockpiled between 1956 and 1962. A 180-kiloton broadside would have made for a trouser-filling experience.

But the need for really big guns was finally negated not just by improved tactical missiles but by even smaller fission bombs. Production of the W-33 eight-inch nuclear shell, which could be fired from standard howitzers and naval guns, began in 1957.

These uranium-gun designs using large amounts of highly-enriched uranium were superseded in the late 1960s by the W-48 plutonium device. There are rumors that the Navy also began work on a five-inch nuclear shell.

The Soviets — true lovers of guns, tanks and other Things Big — also fielded some monster nuclear artillery pieces, including the 15-inch “Capacitor” self-propelled mortar. Like the Americans, they too abandoned their big guns when smaller, lighter nuclear warheads became available.

During the last arms-control talks before the USSR crumbled, the Soviets agreed with the Americans to retire and dismantle all remaining nuclear artillery. Arms-control scholars argued that uranium-gun shells could become a dangerous pathway to proliferation.

Tactical missiles big enough to lob even a small nuke are hard to get, as the black market in Scuds demonstrates, but the world is awash in artillery pieces. Although it requires a lot of fissile material, the precision manufacturing involved in atomic artillery is within the capabilities of driven men.

The Navy’s electromagnetic cannon is the direct descendant of the great guns; it does away with chemical propellants and allows missile-like artillery ranges of up to 100 miles.

In January 2013 former Navy Under Secretary Robert Work said rail guns could project power in theaters denied to close-range naval forces owing to the proliferation of cheap guided weaponry. Whereas missiles and all their components must be replaced after each use, a rail gun can fire its relatively cheap projectiles for a prolonged period.

What sorts of projectiles? Well now, that’s another zany tale …