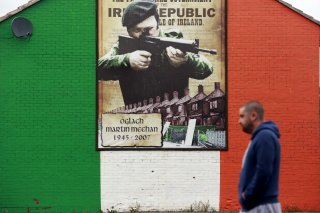 The Republic of Ireland remained neutral during World War II—a period of war known as “The Emergency” because that is when the government passed Emergency Powers, which gave it sweeping powers including the censorship of the press and control of the economy. Ireland wanted to avoid being drawn into the conflict. The government in Dublin also knew that if it took an overtly pro-British line another Irish civil war was possible.

Ireland had good reason to fear an invasion and planned accordingly, expecting that either Germany or the United Kingdom would act. The British had their own concerns, namely that Ireland would be overrun, particularly if the Irish Republican Army (IRA) acted as a fifth column. The concerns by both Dublin and London were warranted as Germans actually developed a number of plans for invasion.

Plan Kathleen, also known as Artus Plan, was a military operation devised by the IRA and sanctioned in 1940 by Stephen Hayes, acting IRA chief of staff. The IRA had actually declared war on the United Kingdom on Jan. 1, 1939, nine months before the German invasion of Poland. The IRA sought rule across Ireland, including Northern Ireland.

The Germans saw Ulster as Britain’s most vulnerable province and even a potential platform from which to launch future raids. Dublin businessman Stephen Carroll Held made a trip to Germany and sought to establish a link with the German Intelligence (Abwehr) to secure arms and money to advance the IRA’s efforts against the UK.

The Germans seemed to have nothing to lose, and in the summer of 1940, the German Abwehr agent Hermman Gortz was parachuted into Ireland. He quickly established contacts with the IRA in support of Plan Kathleen. However, given the in-fighting and lack of organization in the IRA, Gortz quickly soured on the entire plan as it had little hope of succeeding. In addition to the lack of organization or equipment to pull off the invasion, Hayes and other leaders in the IRA simply assumed that German forces could have materialized to support the invasion of Ulster, which they expected would have drawn the Republic of Ireland into a war with the UK—and that somehow they could have won!

Plan Kathleen was little more than a pipedream of the IRA. Meanwhile, the Germans devised their own invasion plan—Operation Green. The island was in Berlin’s sights as it could have provided a convenient base from which to launch bombing raids or even an amphibious expedition on mainland Britain. At the very least, a German invasion of Ireland would pin down British troops in Ulster.

The plan for Operation Green was seen to support Operation Sealion, and it has been suggested that it was really no more than fiction, a feint that was perhaps designed to distract London away from Sealion. Whether it was ever really to take place isn’t known, but given that Ireland is further from France than southern England, it seems that it was more fantasy.

Yet, extensive plans seem to have been drawn up—while German agents obtained everything from economic journals to tourist guidebooks to aid in the planning. Reconnaissance planes crossed the countryside and photographed the harbors. Operation Green called for some fifty thousand men to be deployed from French ports including Lorient, St. Nazaire and Nantes, where they would make landings between Dungarvan and Waterford in the south of Ireland.

In the end, there was no green light for Operation Green. Even if the invasion could have somehow succeeded, those unfortunate Germans would have been isolated and essentially abandoned. Once Sealion was abandoned, so too was Green.

Even after the United States entered World War II, Germany continued to consider ways of stirring up trouble in Ireland. There had been Operation Whale, Operation Dove and Operation Sea Eagle. Each operation involved the IRA.

Then there was Operation Osprey, a bizarre plan conceived by the German Foreign Ministry and Abwehr II. It was devised to tie up and counter the U.S. troops stationed in Northern Ireland before they could set up bases in the Republic of Ireland. Osprey was to use a volunteer force of commando teams trained in sabotage to train Irish partisans, volunteers from the IRA and even the Irish Army to resist the U.S. invasion. However, because the U.S. never mounted such an invasion, Osprey was never put into place.

Just as the Germans devised plans for an invasion, so too did the British. The difference was that Plan W was actually a joint military operation between the governments of Dublin and London. Devised between 1940 and 1942, it was meant to be executed in the event of a German invasion.

In this case, Northern Ireland was to serve as a base of a new British Expeditionary Force that would move across the border to repel an amphibious invasion or to counter an attack from German paratroopers. The plan also coordinated actions with the Royal Air Force and Royal Navy.

As the tide of the war turned against Germany, it became clear it would maintain its neutrality. Yet, until the war ended, fears remained that the UK might use the war as an opportunity to return Ireland to its control. That is why even as Plan W was devised, units of the Irish Army also prepared lines of defense against a British invasion.