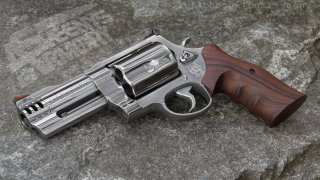 Most handguns are fairly well-made tools that do their jobs reasonably well. Revolvers and pistols are defensive weapons by nature and often a weapon of last resort, so such guns tend to emphasize reliability over all else. The vast majority of handguns are decent in one way or another, though in the modern history of firearms there have been several notable lemons. Unergonomic, underpowered, or worst of all unreliable, these cursed handguns have achieved lasting infamy.

Japan has never been known as a firearms innovator, and many of its imperial-era small arms were inspired by or licensed from European designs. In 1934, Japanese firearms designer Kijiro Nambu unveiled the Type 94 pistol. The Type 94 was a blowback-operated pistol chambered in 8-millimeter. It weighed 1.68 pounds and was equipped with a six-round magazine. Not only was the Type 94 an ergonomic nightmare, it had the unfortunate tendency to discharge while being handled. Pressing an exposed sear on the side of the Type 94 will actually cause it to go off. It was also possible to depress the magazine release simply by laying the pistol down on a flat surface, and the pistol was known to be extremely difficult to field strip.

In the 1960s, MBA Associates created a line of autoloading rocket weapons. Aside from a rifle and pistol, the company created the Mk. II Gyrojet pistol. The Mk. II was a very lightweight pistol with relatively few moving parts. It fired a self-contained 13x36-millimeter bullet-shaped rocket common to the entire line of weapons. The rocket was spin-stabilized, the rocket motor ignited by the firing pin striking the nose of the pistol. The rocket achieves stability, not through the use of fins but is stabilized by a spin imparted as it travels through the pistol barrel. The rocket bullet was notoriously slow out the barrel, before it worked up to full velocity, and could be diverted at very short distances with the wave of a hand. The rocket was also notoriously inaccurate at longer ranges.

The FP-45 Liberator was a well-intentioned attempt to provide the millions trapped behind Hitler’s Fortress Europe with an offensive handgun. The single-shot pistol, with its snub-nosed barrel and .45 ACP round, was designed to be used by resistance fighters. In theory, it could be used to shoot a German or Italian soldier and then take his much better service pistol or rifle. It’s not clear from the historical record this was ever actually done, and it’s also clear that this was a poor pistol to do it with. The short barrel paired with the .45 ACP round imparted heavy recoil that untrained resistance fighters would not be used to. Furthermore, it was difficult to aim and had a range of just about 25 feet. If a resistance fighter missed there was no chance of a follow-up shot.

In 2003, Smith & Wesson released a pistol designed for use by big game hunters in remote regions. The S&W500 is a five-shot, stainless steel revolver chambered in .500 Action Express. The revolver weighs 4.3 pounds and features an eight-inch barrel. While certainly a good firearm for that relatively small cohort that hunts with large-caliber revolvers, the S&W500 is on this list not because of the people that use them correctly, but those that feel compelled to own them for the wrong reasons. The S&W500 is more often than not purchased by gun owners seeking the biggest and the baddest handgun—for no obviously rational reason. The gun ends up at an indoor shooting range where the pistol’s enormous roar is enough to rattle everyone else on the firing line, and many indoor ranges have banned .50 caliber handguns as a result.

In 1900, English firearms designer Hugh Gabbet-Fairfax submitted his new pistol design, the Mars, for trial with the Royal Navy. The pistol was produced in three calibers: 8.5-millimeter, 9-millimeter, and .45. The Mars utilized a unique, extremely complex semi-automatic “long recoil” operating system in which the barrel and breech, locked together, traveled a distance backward greater than the length of the cartridge. The gun featured a tremendous amount of recoil and the barrel was often left pointing straight up between shots. According to firearms historian Ian V. Hogg, the Royal Navy report on the gun said in part, “Nobody who fired the pistol wanted to fire it again.” Not surprisingly, the Royal Navy turned the pistol down and Gabbet-Fairfax went bankrupt after only eighty pistols were built.