These Next-Gen U.S. Army Goggles Will Dominate the Battlefield 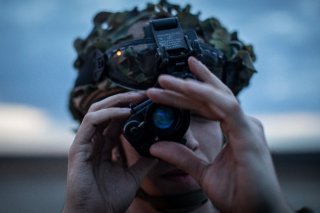 The U.S. Army continues to fast-track “gateway” technologies engineered to connect transport layer networking systems to enable soldiers on the edge of combat to attack and destroy enemies much more quickly.

One key solution, being accelerated by The Vertex Company, is a technology called Gateway Mission Router 1000, an interface system that is able to link information across separate technologies. It is part of a technical effort to enable seamless connectivity. Gateway technologies use common technical standards to essentially “translate” or enable data connectivity between different networks, transmission systems, and data transmission technologies.  For example, Vertex GMR-1000 technology can provide a point of connection for the U.S. Army’s Integrated Visual Augmentation System (IVAS), goggles able to organize arriving navigational, intelligence, and sensor data for soldiers in 3D in real-time.

“We're talking about tablets, cell phones, and things of that nature, as well as the Integrated Visual Augmentation System. We've done a lot of user trials and a lot of exercises using the conductivity for IVAS on the tactical edge in vehicles,” Pat Renwick, senior director at The Vertex Company, told The National Interest in an interview.

Aligning with IVAS is an extremely significant development for GMR-1000 given its fast-evolving role in connecting soldiers with larger air and ground platforms and command and control systems. The success of IVAS and GMR-1000 hinges entirely on an ability to translate and transmit data in different formats traveling through different or otherwise disconnected transport layer technologies. The significance of IVAS was explained by the U.S. Army Vice Chief of Staff at a think tank event in 2020.

“We take all soldiers who have IVAS and turn them into a sensor collecting data to share with a greater network. The screen can chart a path and tell you where a reported adversary is. You can see through heat and augment existing light,” Gen. Joseph Martin, Vice Chief of Staff of the Army, told an audience during an event at the Foundation for the Defense of Democracies in 2021. “If you have been dismounted, you know it can be lonely. You want to have a link to your fellow soldiers. This is what IVAS is delivering to our formation.”

Dr. Bruce Jette, Assistant Secretary of the Army, Acquisition, Logistics and Technology, told The National Interest in an interview earlier this year that engineers created IVAS with an ability to compensate for what might otherwise be some of the limitations of the human eye. The operation of IVAS calls upon human-machine interface because it integrates some of the neurological processes of human vision with software engineered to process, organize, and display otherwise challenging factors such as “depth perception,” surrounding peripheral objects, and other elements of human visual orientation.

While much of the development with GMR-1000 has thus far been demonstrated through U.S. Army technologies, the intent and goal of the gateway is to contribute to the joint multi-service JADC2 effort. “This isn't a single service, it's not just one program office, it's the entire DOD. So the -- the vastness of this. We also have DOD efforts underway, as -- as I'm sure most of you know -- Project Overmatch, Project Convergence, ABMS (Advanced Battle Management System),” Lieutenant GeneralDennis Crall, Director, Command, Control, Communications And Computers/Cyber; Chief Information Officer, Joint Staff, told reporters in a JADC2 briefing, according to a Pentagon transcript from earlier this year.