These U.S. States Are Most Dependent on the Gun Industry 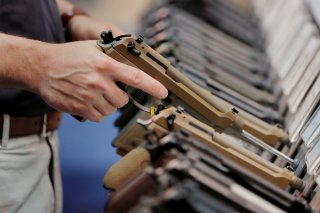 Between the pandemic, civil unrest, and the arrival of a Democratic administration, gun sales in the United States have surged in recent years. One oft-quoted statistic is that five million U.S. adults became gun owners for the first time between January 2020 and April 2021, more than doubling the figure from the year before.

With recent high-profile mass shootings, these are uncertain times for the gun industry, even if significant federal gun legislation is unlikely to pass.

In fact, Small Arms Analytics reported earlier this month that gun sales have dropped 12.6 percent year-over-year in May, although the 1.3 million sold remain well above pre-pandemic levels.

“The May 2022 year-over-year drop in firearms unit sales continues to fit the pattern thus far this year: monthly drops relative to 2021 but still substantially above the pre-pandemic levels: in 2019, unit sales from January to May amounted to about 5.6 million units; in 2020, they were about 8.7 million; in 2021, about 9.2 million; and in 2022 about 7.2 million for the same month,” SAAF Chief Economist Jurgen Brauer said in the release.

A report from Wallethub this week looked at how important guns are to the economy of each U.S. state. The methodology included several factors, from industry jobs per 10,000 residents, to how many guns and ammo dealers there are, to gun shows per capita, to wages in the industry in that state, as well as the stringency of gun laws and “gun industry immunity.”

“In light of the recent developments in the firearms industry and debates on how, if at all, it should be restricted, WalletHub compared the economic impact of guns on each of the 50 states to determine which among them leans most heavily on the gun business, both directly for jobs and political contributions and indirectly through ownership,” the site said.

According to that report, Idaho is the state most dependent on the industry, followed by Wyoming, Kentucky, South Dakota, Montana, Arkansas, Alaska, North Dakota, Missouri, and Oklahoma. All are states that Donald Trump carried in the 2020 election; the highest-ranking state on the list carried by Joseph Biden was New Hampshire (no. twenty-one), although the next four states on the list (Minnesota, Maine, Wisconsin, and Oregon) were also all won by Joe Biden.

Four states, New Hampshire, Wyoming, Idaho, and Arkansas, tied for the most firearms industry jobs per capita, while Hawaii had the least.