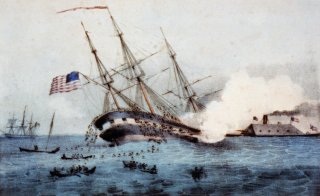 Here's What You Need To Remember: If the South could break the Union’s blockade using ironclads, the Confederacy would win the war. If the U.S. Navy’s wooden ships were helpless against ironclads, so too were the stout oaken ships of the Royal Navy, France and Russia. The clang of cannonballs ricocheting off metal armor was a declaration that most of the world’s warships were now obsolete.

This appeared several years ago.