A Third Trump-Kim Summit May Be Coming 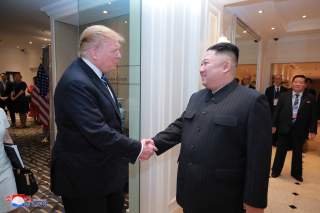 Key point: Talks are set to begin this weekend in preparation for a possible summit between Trump and Kim.

What Happened: U.S. officials may be in Pyongyang to lay the groundwork for working-level talks, with U.S. Special Representative Stephen Biegun potentially set to hold such talks next week, according to leaks reported by The Korea Times Sept. 26.

Why It Matters: If confirmed, this gathering of officials in Pyongyang would further signal that the two countries are indeed readying to make another push in their outreach, which has been stagnant since late June. With only months to go before North Korea's end of 2019 deadline for greater U.S. flexibility, and a little more than a year to go before the U.S. presidential election, Pyongyang may be motivated to clinch a deal to avoid losing its window. Likewise, the White House may be looking for a foreign policy win ahead of the 2020 vote.

U.S., North Korea: Officials Rumored to Be in Pyongyang in Preparation for Talks is republished with the permission of Stratfor Worldview, a geopolitical intelligence and advisory firm.