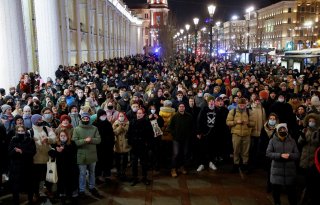 Nearly two thousand Russians have been arrested for their participation in anti-war protests in Moscow, Saint Petersburg, and other major Russian cities. The protesters condemned president Vladimir Putin’s decision to invade Ukraine after a months-long military buildup.

Around 1,750 protesters in total were arrested across fifty-four cities in Russia, according to the Associated Press. The largest protests, and more than half of the arrests, took place in Moscow, where demonstrators gathered in Pushkin Square and chanted slogans opposing the ongoing military intervention.

Hundreds of Russian riot police surrounded the event. Many protesters were arrested and put in police vans the moment they unveiled their anti-war banners – a development that was criticized by Novaya Gazeta, one of Russia’s last remaining liberal newspapers.

The magazine also published footage of demonstrations along Nevsky Avenue in Saint Petersburg. Those protests that were interrupted by police with megaphones, informing them that large organized gatherings violated Russia’s coronavirus-era social distancing restrictions.

Other protests took place in Yekaterinburg, an industrial city located in Russia’s interior; Novosibirsk, the largest city in Russia’s sparsely-populated Siberia region; and Kaliningrad, the Russian enclave on the Baltic Sea bordering Lithuania and Poland.

Of the protesters arrested for participating in the demonstrations, roughly six hundred and fifty have been detained, according to OVD Info, a political persecution NGO in Russia. Of that group, roughly half (two hundred and ninety) were incarcerated in Moscow, one hundred and twenty-eight in Saint Petersburg, and thirty-seven in Yekaterinburg.

Videos of the protests also circulated widely on Twitter, where they were presented as evidence that many Russians opposed Putin’s decision to invade the country without consulting the Russian public or other elected officials.

In response to the demonstrations, Russia’s interior ministry issued a televised statement on Thursday ordering an end to “unsanctioned protests” and claiming that those who violated the order would be “arrested and brought to responsibility.”

Except for the ministry’s statement, the Russian press largely ignored the protests, although they were covered in Novaya Gazeta and the Moscow Times, a liberal English-language newspaper based in Moscow.

Seven Novaya Gazeta journalists have been murdered since Vladimir Putin’s accession to power in Russia in late 1999. The magazine’s editor-in-chief, Dmitry Muratov, was awarded the Nobel Peace Prize in October 2021.