Through Its Attack in Syria, ISIS Has Declared Its Return 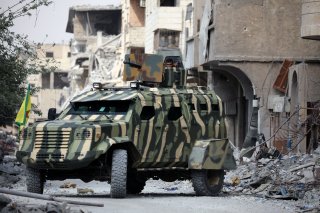 On January 20, 2022, ISIS launched a massive assault on the city of Hasakah. It is the group’s largest attack since the Syrian Democratic Forces (SDF) liberated Baghuz almost three years ago, retaking the last territory of their so-called “caliphate.” The attack, which has been ongoing for several days, targets the al Sina’a prison, where 5,000 ISIS fighters have been held since their defeat in 2019. It has forced the evacuation of multiple neighborhoods in Hasakah as ISIS fighters have occupied buildings and part of the prison. The SDF, with air support from the U.S.-led Coalition to Defeat ISIS, has been recapturing escaped prisoners and retaking parts of Hasakah that were overrun.

Al Sina’a is just one of many facilities that house tens of thousands of ISIS-affiliated individuals who were captured over years of fighting against the terrorist organization. Another major site of potential instability is the Al Hawl Camp, in which over 50,000 Syrian, Iraqi, and foreign ISIS-affiliated people are housed. These facilities are not just massive, but extremely dangerous and require far more resources than the Autonomous Administration of North and East Syria (AANES) has at its disposal.

AANES has been warning the international community about this issue for years. While much of the world turned its attention away from the region and from the enduring threat of ISIS, the terrorist organization was regrouping and planning for a large attack to free its imprisoned fighters. This assault on al Sina’a is evidence of that, and it is a challenge to the entire international community and global coalition.

Furthermore, the destabilizing nature of this attack only serves to benefit the Assad regime and Turkey. During the attack on Hasakah, one SDF unit, the Tel Tamr Military Council, sent reinforcements to the city to support the anti-terror operation. A Turkish drone struck one of the vehicles transporting fighters to Hasakah, injuring the fighters inside.

The AANES appreciates the military support that the coalition has provided to it and continues to provide during the ongoing attack. However, this is not solely a military issue. The AANES and SDF have called for an international response to the issue of ISIS detainees many times. Many of the most dangerous fighters, including the ones involved in the Hasakah attack, are foreigners who came to join ISIS from dozens of countries around the world. Yet very few efforts have been taken by these countries to repatriate their citizens and accept responsibility for them. AANES even called for setting up international tribunals to put members of ISIS on trial for crimes but received very little response.

Leaving these ISIS detainees in these prisons and camps is not a long-term solution, and the longer they remain in these facilities, the more dangerous they become for the region, as shown by the complex and deadly al Sina’a assault.

I call on the international community to help the AANES reach a solution for the ISIS detainee issue. The SDF needs further support to continue to pressure ISIS networks in the region. AANES also needs support for the local economy, which has been ravaged by eleven years of war. ISIS takes advantage of the unemployment and poverty of the region by offering people money to work for them. Rebuilding infrastructure, such as schools and hospitals, and creating jobs alongside continuing anti-terror efforts is the only way to ensure the enduring defeat of ISIS.

Without a solution to this issue, all the efforts that the global coalition made with AANES will be in vain.

Sinam Mohamad is the representative of the Syrian Democratic Council (SDC) mission in the United States. She is a top diplomat of the Autonomous Administration of North and East Syria (AANES) in Syria and also serves on the SDC Presidential Council.