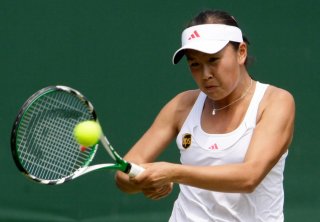 Shortly after the disappearance of Chinese tennis player Peng Shuai on November 2nd, the Women’s Tennis Association (WTA) broke from other major league sports’ typical kowtowing to Chinese markets and called out the Chinese Communist Party (CCP). Its message was extremely clear: The safety of the players is more important than potential revenue from China. And these efforts appear to be paying off. While the Chinese media has been scrambling to spin the story, the UN has made an official demand for proof of Shuai’s whereabouts and safety, and #WhereisPengShuai has been trending on Twitter for weeks, even receiving attention from the sport’s Messiah, Serena Williams.

Over the past two decades, it seems Western powers have come to tolerate—even ignore—the CCP’s darker side. For this reason, the WTA’s stand against CCP oppression is refreshing to see, and it’s just one episode in a recent wave of defiance that could indicate a turn in the tide for China’s international standing.

The tennis world isn’t the only group that has had enough of China’s antics. Riots and protests recently broke out in the Solomon Islands over government corruption and geopolitical tensions with China. Following the riots, most of Chinatown was burned down, and the only buildings left standing proudly displayed the Taiwanese flag. Fueling these riots was a decision from last year where the government revoked recognition of Taiwan in favor of Beijing. The decision was mired in controversy as leaders were accused of corruption during the process. The close ties to China were not representative of the people’s will, and little has come of the relationship to benefit the citizens of the Solomon Islands. Australia, a key player in President Joe Biden’s counter-China strategy, deployed troops to restore peace on the island, a clear win for the Western powers.

Most recently, more considerable world powers have taken more extreme positions. President Biden’s Summit for Democracy, set to take place in early December, sends a clear message to China and Taiwan about U.S. allegiance. While not surprising that the CCP wasn’t among those invited, the inclusion of Taiwan is a shocking development. The Summit for Democracy makes it clear the United States intends to stand with Taiwan. Since taking office, the Biden administration has continued to prod the CCP in small ways. Most notably, the signing of the AUKUS military agreement, maintaining many of the Trump-era tariffs and continuing to pursue a military base on Palau.

Meanwhile, Germany’s new foreign minister, Annalena Baerbock, is an outspoken China critic. While Germany has previously refused to interfere with the One China policy, the newly led ministry would like to point the country, and the whole EU, in a new direction. Lithuania has also dispatched lawmakers to Taiwan, much to the dismay of the CCP.

There is no question that the CCP will continue to rule in China, but it is becoming increasingly explicit on the international stage that they can no longer have their cake and eat it too. China can no longer market itself as a developing country in need of compassion and aid while simultaneously perpetrating human rights abuses and bullying small countries that dare challenge them. One need look no further than the most recent statements by the CCP, where they simultaneously promise to no longer bully their neighbors, yet continue to back the military coup of Myanmar, support corrupt politicians in the Pacific Ocean, and deny Taiwanese independence. The CCP may be facing rough waters ahead.

Toph Cottle is a Johns Hopkins SAIS and University of London SOAS student studying International Affairs and Development Economics. He focuses on Sovereign Debt Crises and the South Pacific and tweets @tc_elk.