Time for America to Get Serious on Taiwan 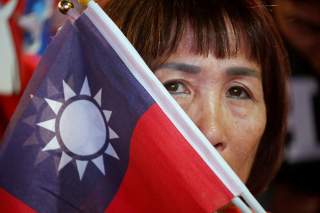 Voters in Taiwan delivered a resounding re-election victory on January 11 to incumbent President Tsai Ing-wen, the pro-sovereignty candidate who stood up to Beijing and unabashedly campaigned in favor of Taiwanese freedom and democracy. Her victory represents a remarkable rebuke of the Chinese Communist Party (CCP) and presents an opportunity to deepen mutually beneficial security cooperation between the United States and Taiwan.

When presented with this choice, Taiwanese voters gave Tsai a record 8.17 million votes, which represented more than 57 percent of the popular vote. This is despite Tsai’s having faced numerous domestic political challenges that cast initial doubt on her re-election chances.

In the run-up to the election, Beijing used a litany of methods to intimidate Taiwanese voters, spanning social media-based disinformation campaigns to economic, diplomatic, and military tools. The CCP sought to stifle Taiwan’s economy and limit the travel of Taiwanese. Beijing even sent an aircraft carrier through the Taiwan Strait in late December – two weeks before the election – after also sending one the previous month, an unmistakable message to the Taiwanese electorate.

But the CCP’s attempts to coerce Taiwanese voters, combined with Beijing’s authoritarian power grab in Hong Kong, backfired, ultimately engendering more support for Tsai while putting Han on the defensive.

Tsai made the point explicit the night before the election. “Young people in Hong Kong have used their lives and blood and tears to show us that ‘one country, two systems’ is not possible,” Tsai said. “Tomorrow it’s the turn of our young people in Taiwan to show them that the values of democracy and freedom will overcome all difficulties.”

The Taiwanese people did just that, and America should do more than merely applaud.

Thankfully, Washington has already taken important steps to begin to address the dangerous military imbalance between Taipei and Beijing. Last July, the Trump administration announced it had approved $2.2 billion in sales of air-defense missiles and tanks to Taiwan. Then, in August, Taiwan inked an $8 billion deal for 66 U.S.-made F-16V Block 70/72s, drawing bipartisan support from U.S. lawmakers.

Despite these positive steps, there is more to be done: Specifically, Washington should tailor U.S. defense assistance to better address Taiwan’s particular needs.

To begin, Washington should work with Taipei to expeditiously field the capabilities Taiwan needs to implement its 2017 Overall Defense Concept, designed to thwart a major cross-strait assault.

That would require both greater capability and capacity related to anti-ship missiles, naval mines, air defenses, unmanned aerial vehicles, and mobile precision fires. It would also include improved anti-submarine, electronic, and cyber warfare capabilities. To supplement such efforts, Washington should also help Taiwan expand its stockpile of precision munitions.

Finally, Washington’s support for Taiwan should go beyond just military hardware to include a dramatically expanded combined training and exercise program. Given Taiwan’s dependency on reserve forces, as well as the importance of maritime strait control, reserve force training and naval exercises are natural areas to prioritize.

In the election, the Taiwanese people delivered a mandate that they expect their government to defend their democracy in the face of Beijing’s authoritarian coercion.

America’s national security imperatives, to say nothing of its foundational principles, should impel Washington to spend less time worrying about offending the CCP and more time helping a fellow liberal democracy under threat.

Bradley Bowman is senior director for the Center on Military and Political Power (CMPP) at the Foundation for Defense of Democracies (FDD), where Andrew Gabel is a research analyst. For more analysis from Brad, Andrew, and CMPP, please subscribe HERE. Follow Bradley and Andrew on Twitter at @Brad_L_Bowman and @Andrew_B_Gabel. Follow FDD on Twitter @FDD and @FDD_CMPP. FDD is a Washington, DC-based, nonpartisan research institute focusing on national security and foreign policy.