Time to Bring Back the Pocket Battleship 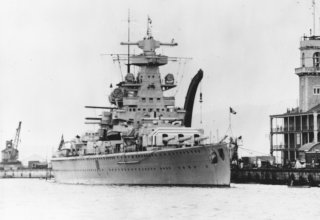 Last week, the 8500-ton cruise ship RCGS Resolute was harassed by a Venezuelan patrol boat while sailing in international waters off the island of La Tortuga in the Caribbean Sea. The Venezuelans ordered the Resolute to change course, fired on her, and then rammed the ship in an apparent attempt to force it into territorial waters.

If those tactics sound familiar, it's probably because the Venezuelans are following the Chinese game plan from the East and South China Seas. In fact, on the very same day, a Chinese fishing boat rammed a Japanese destroyer, breaching the hull (but causing no casualties). China played the same game near Japan's uninhabited Senkaku Islands (also claimed by China) in 2010.

But the Venezuelans were in for a surprise: the Resolute was no ordinary soft-hulled cruise ship, but a hardened ice cruiser equipped for Arctic exploration missions. The Resolute suffered little more than paint damage. The bow of Venezuela's patrol boat GC-23, the Naiguatá, crumpled like the front end of a car in a crash test. The crew were rescued, but the boat went down.

A lesson for the US Navy: armor works. If you want to maintain freedom of navigation in troubled waters, you have to be able to take a hit and keep on sailing. Bring back the battleship.

Or at least the pocket battleship. The Resolute is roughly the same size and displacement as an Arleigh Burke class destroyer, though far more sturdily built. Put a few offensive weapons and an advanced radar system on a ship like this, and you have the ideal vessel for running freedom of navigation operations (FONOPS). The Chinese and Russians could harass a pocket battleship all day, but if they risked a collision, it's not the battleship that would have to take evasive action.

Run your fishing boat, coast guard cutter, or modern destroyer into an armored ship, and there are only two possible outcomes. If you're lucky, you'll bounce off. If you're unlucky, as the Naiguatá was, you'll sink. The battleship or pocket battleship (or, in the case of the aptly-named Resolute, polar cruise ship) will hardly notice.

In preparing for ultra-high-technology warfare, the Navy is absolutely right to focus the fleet around stealth ships, attack submarines, and aircraft carriers. But in its enthusiasm for its overarching sea supremacy mission, the Navy is forgetting that it is more likely to be called on to undertake mundane missions like running FONOPS, picketing in the Persian Gulf, and fighting Somali pirates than to fight World War Three.

Certainly, the Navy has to be ever-ready to fight (and win) the next world war. That's the only way we can be sure never to have one. But it's crazy to risk a $2 billion destroyer on FONOPs. Sure, an Arleigh Burke could easily obliterate a hostile fishing boat with a Harpoon missile or even sink it with its deck guns, but would it? Experience suggests that this is unlikely. In the twenty-first century world of sub-lethal confrontation, naval vessels don't fire on potentially dangerous foes, even when lives are at stake.

Afghanistan and Iraq taught the Army that it had to prepare for missions short of World War Three, and over the last two decades it has reinvented itself as a lighter, more mobile force, ready to take on today's challenges even as it prepares for a tomorrow that we all hope will never come. The Marines have given up their tanks to refocus on small team operations. The Navy has yet to make this adjustment.

When it does, some form of future battleship should be on the cards -- and in the fleet.