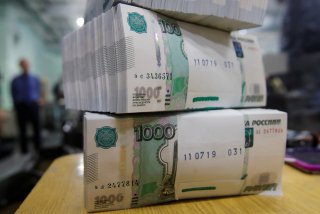 Following reports that a Russian military intelligence unit offered bounties to kill U.S. troops in Afghanistan, both Democrats and Republicans in Congress are weighing retaliatory sanctions. But as Congress looks to get tougher on Russia, it should not ignore what may be the most effective step Washington could take to punish Putin and counter Russia’s malign influence: closing the legal loopholes that facilitate Russian illicit finance. Congress has a prime opportunity to do just that as part of its annual defense spending bill.

Over the course of his twenty-year reign, Russian president Vladimir Putin has raided his enemies’ private assets and plundered Russia’s national wealth, distributing the booty among his cronies and political allies while amassing billions for himself in the process.

But in a system in which property rights are never guaranteed, Russia’s ultra-rich—Putin included—need somewhere safe to stash their ill-gotten gains. As a result, a massive amount of Russia’s wealth is held offshore—the equivalent of up to 60 percent of GDP, by one estimate. After passing through several layers of offshore tax havens, much of this money ends up in the West, particularly the United States and the United Kingdom, whose rare combination of financial depth, strong property rights, and lax transparency requirements make them well-suited for stashing ill-gotten gains.

In the United States, creating a shell company is easier than getting a library card, requiring no information about the company’s true or “beneficial” owner. In large part, because its standards are among the lowest in the world, America is home to roughly ten times more shells than the next forty-one tax havens combined. While these entities can serve legitimate business purposes, their anonymity all too often makes them useful vehicles for Russians and others to launder dirty money. Indeed, the Financial Action Task Force, an international illicit finance watchdog, has identified this vulnerability as “one of the fundamental gaps” in U.S. defenses.

As scholar Anders Aslund has noted, unscrupulous law firms often serve as another conduit for Russian funds. By passing their money through law firm bank accounts, which in the United States enjoy attorney-client privilege, Russians and other shady actors can slip past anti-money laundering defenses and hide their wealth in real estate and other assets.

The rules governing real estate transactions also invite criminal activity. In the United States, persons involved in real estate closings and settlements have long been exempt from due diligence rules that apply to financial institutions. As a result, illicit funding has flooded into high-end U.S. property markets, particularly in New York and Miami. The London real estate market is similarly awash in Russian cash, helping the city earn the nickname “Londongrad.” In May 2018, Transparency International said it had identified almost £1 billion worth of suspicious Russian purchases of UK property—a figure it called “just the tip of the iceberg.”

Even as it passes through Western shell companies and financial institutions, this money remains largely hidden from government authorities who might otherwise seize it pursuant to U.S. and EU sanctions against Russia. In the infamous “Russian Laundromat” scheme, for example, almost $21 billion in Russian money linked to members of Putin’s family, his inner circle, and Russia’s Federal Security Service, or FSB, left Russia through twenty-one anonymous shell companies, most of them based in the United Kingdom. These funds then passed through over five thousand entities, including over a hundred more anonymous entities in the United Kingdom, before ultimately reaching bank accounts in ninety-six countries, including the United States and nearly every EU country.

However, America still lags far behind the European Union and the United Kingdom, which have taken more aggressive steps to strengthen their anti-money laundering regimes, most notably by requiring all companies as well as some other types of entities to register their beneficial owners in central databases. This requirement will also apply to the British overseas territories, which must create public beneficial-ownership registries for all companies by the end of this year.

Yet even Europe is nowhere near well-defended. Implementation and enforcement remain lacking across the board, not least because most countries’ financial intelligence units are understaffed and under-resourced. Indeed, only ten EU countries have met their obligation to create a publicly available centralized beneficial ownership registry; of those ten, only five have made their databases freely and easily accessible. In addition, the EU and UK beneficial ownership rules do not apply to certain types of legal partnerships and trusts, a potentially serious loophole.

Russia’s leading anti-corruption and pro-democracy activists have condemned both the United States and the UK for their systemic failures. Vladimir Kara-Murza, who barely survived poisoning in 2015, has implored the United States and its democratic allies to “stop supporting Mr. Putin by . . . allowing his cronies to use your countries as havens for their looted wealth.” Opposition leader and anti-corruption activist Alexei Navalny, has accused the United Kingdom of being “run in such a way that it loves dirty money.”

Strong financial defenses are especially important in light of Moscow’s efforts to interfere in democratic processes across the West. The same tactics and loopholes that Putin’s cronies employ to hide their wealth could allow Russia to provide clandestine financial support to political actors that further Kremlin interests. This threat is hardly hypothetical given Russia’s history of funding friendly nonprofits in Europe and possibly even here in the United States.

If Washington wants to lead an international effort to champion transparency, then it should start by cleaning up its own act. A good first step would be to make the U.S. Treasury Department’s Geographic Targeting Orders permanent and nationwide. This measure has received bipartisan support via its inclusion in a Russia sanctions bill that the Senate Foreign Relations Committee passed in December 2019, but which has moved no further.

More importantly, Congress should also address the corrosive role of anonymous shell companies and other opaque legal entities by requiring them all to report their beneficial owners to FinCEN. This cause has received bipartisan and bicameral congressional backing as well as support from stakeholders ranging from the Chamber of Commerce and small businesses to national security experts and state and local law enforcement. The Senate is currently considering a bipartisan amendment to the annual defense spending bill that would require shell companies to reveal their beneficial owners. That legislation would follow a similar bill, the Corporate Transparency Act, passed by the House back in October 2019.

It is long past time to close this gaping hole in America’s defenses against illicit finance and malign influence. By doing so, the United States would not only bolster its national security but would align itself with the interests of the Russian people, while hitting Putin and his cronies where it truly hurts—their pocketbooks.

John Hardie is a research manager and Russia research associate at the Foundation for Defense of Democracies, a non-partisan think tank focused on national security issues.