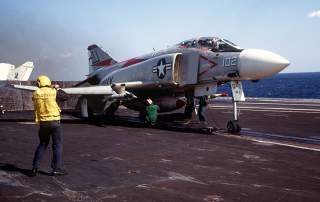 Relations between Libya under Gaddafi’s rule and the USA gradually worsened after Tripoli’s announcement that the Gulf of Syrte (known as the ‘Gulf of Sidra’ in the USA) would be considered as Libyan territorial waters.

In the spring of 1974, Washington issued a diplomatic protest calling this announcement ‘unacceptable’ and a ‘violation of international law’, but otherwise did nothing to challenge Libyan claims, de facto accepting them as such. In fact, preoccupied with other issues, successive US administrations had several times rejected Pentagon proposals for large scale ‘freedom of navigation’ (FON) exercises designed to assert US rights in the gulf and illustrate Libyan inability to back up the claim with military force. Therefore, and because Libyan Arab Air Force (LAAF) interceptors vigorously patrolled the area, even US and French reconnaissance aircraft that operated along Libyan borders tended to stay well away from the area, with few exceptions.

As explained by Tom Cooper, Albert Grandolini and Arnaud Delalande in their book Libyan Air Wars Part 1: 1973-1985, the situation changed once Ronald Reagan was elected into the White House in early 1981. Reagan wasted no time in increasing defense spending, developing a tougher policy the Soviet Union and its allies and announcing his intention to combat international terrorism.

The latter decision brought Washington on a direct collision course with Tripoli. Libya was recognized as a ‘genuine threat’ to US interests in the Middle East and Africa, supporting up to 30 different terrorist organizations worldwide, and deploying operatives and agents of its intelligence services to assassinate the Libyan opposition in the USA. Correspondingly, Reagan’s administration began developing plans to confront the Libyan claim over for Gulf of Syrte, undermine Gaddafi’s domestic power base, thwart the Libyan position in Chad and decrease its influence in the Middle East and Africa. Only one month into his presidency, Reagan approved an assertive, comprehensive FON program, including exercise inside the Gulf of Syrte.

US planning for the FON in the Gulf of Syrte lasted several months and received Reagan’s official go-ahead only on Aug. 1, 1981. One of the reasons for the lengthy preparations for what would otherwise be considered a routine, peace-time live-firing exercise, run several times a year by different elements of the US military deployed around the world, was the Libyan record of attacking US aircraft in international airspace. Another was the development of new ‘Rules of Engagement’ (ROEs), designed to grant on-scene commanders the authority ‘to counter either the use of force or an immediate threat of the use of force’ (so-called ‘Reagan ROEs’), and even to pursue the possible attacker into the Libyan airspace. In the words of Lawrence ‘Music’ Muczynski, then an F-14 pilot assigned to the squadron VF-41 ‘Black Aces’ of the US Navy:

“The ROEs were very specific until then. We could not shoot without permission. Even if we were fired upon, we still had to call back to the ship, describe the situation and get permission to shoot. That was just a way too long. However, prior to this exercise, we were briefed on new ROEs. We could now be pre-cleared by our controllers to engage a specific target, and most importantly, if we were fired on we could return fire, no questions asked. They developed this ROE due to the fact that during this exercise Lockheed EP-3 Orions, Grumman EA-6B Prowlers and Grumman E-2C Hawkeyes, and other high-value assets would all be present.”

Furthermore, the White House and the Pentagon wanted to stage a tremendous demonstration of US military power and send a clear signal about their altered policy to Gaddafi. Finally, the US Navy needed some time to concentrate two carrier battle groups, centered around the carriers USS Forrestal (CV-59), with Carrier Air Wing 17 (CVW-17) on board, and USS Nimitz (CVN-69), with CVW-8 embarked, with thirteen escort and support ships, including the nuclear-powered cruisers, USS Texas (CGN-39) and USS Mississippi (CGN-40), in the Mediterranean Sea.

The FON and the Open Ocean Missile Exercise (OOMEX) were announced on time to the Libyan authorities, and they immediately protested, calling them a violation of Libya’s territorial waters and airspace. Nevertheless, the two carrier battle groups, under the command of Rear Admiral James E Service, moved to a position north of the Gulf of Syrte and commenced the exercise in the early hours of Aug. 18, 1981.

While the missile exercise was going on, both carriers remained fully prepared to intercept any Libyan aircraft and naval vessels that approached the exercise area. Correspondingly, a number of McDonnell Douglas F-4J Phantom II and Grumman F-14A Tomcat interceptors were catapulted into the morning sky and positioned so as to establish a barrier between the exercise area and the Libyan coast. Supported by Grumman E-2C Hawkeye airborne early warning (AEW) aircraft, pairs of F-14s filled four stations and pairs of F-4s three, with one of the Tomcat stations being clearly south of 32° 30′, which the Libyans declared as a northern border of their territory. At dawn, the Tomcats were followed by destroyers USS William V Pratt (DDG-44) and USS Caron (DD-970), which steamed south of 32° 30′ and were to remain inside the Gulf of Syrte for the following 36 hours.

When the US Navy-run FON in the Gulf of Syrte began, Gaddafi was on a state visit to Aden in the then South Yemen. Because the airspace where the US exercise took place was within the responsibility of the flight control in Tripoli, as soon as USN aircraft appeared there, the Libyans requested the Americans to identify themselves. The Americans not only ignored such requests but then also entered the airspace south of the ‘Line of Death’. Members of the Revolutionary Command Council (RCC, government of Libya in the 1970s) therefore ordered the LAAF to scramble and either force US Navy aircraft away or shoot them down. Correspondingly, no less than 35 pairs of Libyan interceptors, including a total of 70 MiG-23MS’s, MiG-25Ps, Mirage F.1s, and even Su-22s, Su-22Ms and MiG-25RBs, approached the exercise area during  Aug. 18, 1981, as recalled by Muczynski:

“Fighters from Nimitz were responsible for three combat air patrol (CAP) stations, one to the south and two to the west of the exercise area. The Forrestal had two CAPs to the east of the shoot area. Both air wings also maintained a CAP over their respective carrier. On the first day of the exercise all three of our CAPs were engaged. The perception was that the two western CAPs were getting most of the action.”

While some of LAAF pilots did their best in attempting to bring one of the US Navy fighters within range of their weapons, most did not show any kind of aggressive intentions at all. According to Libyan accounts, the major reason for this was that, timely warned by E-2C Hawkeyes and supported by electronic countermeasures emitted by Grumman EA-6B Prowlers and EP-3 Orions, the excellently trained Americans entered every engagement from a favourable position. They could usually position their fighters `in the saddle’, behind, above or below LAAF aircraft, in the best position to deny them a chance of successful engagement and force them to withdraw. Muczynski explained:

“Half of the time we would intercept them and they would let us join right to the wing. One Tomcat would stay in a mile trail, just in case, while the wingman would take pictures, inspect the MiGs visually, and ‘communicate’ (make rude hand gestures) to the Libyan pilots. It was pretty surreal to approach just a couple of feet from two MiG-25s. Until then it was just a picture in a book, and now here it was next to my jet. And when he lit those huge afterburners on that Foxbat, wow! His motors were huge! He could really move in a straight line, but couldn’t do much else.”

Not knowing that their opponents received an order to ‘destroy’ any US Navy aircraft underway south of 30° 32′, US Navy pilots like Cdr ‘Bad Fred’ Lewis had mixed it up with successive pairs of Libyan fighters. Only in three cases did the Libyans manage to penetrate the exercise zone, forcing Americans to stop their OOMEX. From the standpoint of American fliers, the situation was resembling scenes from their dissimilar air combat training, as recalled by one of VF-84’s pilots: