Time For A Low-Intensity Marine Corps? 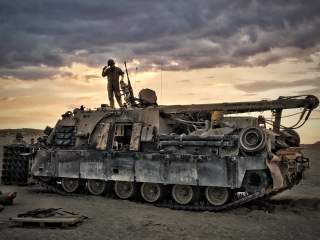 Buried nearly 500 pages into the John S. McCain National Defense Authorization Act (NDAA) for Fiscal Year 2019 , Senate Bill 2987, is an interesting directive: “No later than February 1, 2019, the Secretary of Defense shall submit to the congressional defense committees a report setting forth a re-evaluation of the highest priority missions of the Department of Defense, and of the roles of the Armed Forces in the performance of such missions.” Despite receiving passing attention in the media, this small section of a large bill has potentially enormous long-term repercussions.

The Senate NDAA passed by a vote of 85–10 on June 19. Much of the re-evaluation that the Senate Armed Services Committee calls for in S.2987 is justified and indeed overdue. There is a glaring need to take a new look at issues such as:

-Future ground vehicles that are not optimized for high-end conflict

Alongside these necessary inquiries, the requested report also asks a much bigger question: “whether the joint force would benefit from having one Armed Force dedicated primarily to low-intensity missions.” The bill tells us which Armed Force this would be: the United States Marine Corps.

The Trump Administration’s National Defense Strategy rightly seeks to reorient America’s military on the most difficult task it can face: deterring or winning a large-scale modern war against a peer competitor. The Senate NDAA seems guided by that same logic.

The military and its civilian overseers have picked up some bad habits from the past two decades of low-intensity operations. At least one prominent retired general questions whether the US military still knows how to fight a major war. [There should be a hyperlink in that previous sentence, let me know if not]. Counterinsurgency may be “eating soup with a knife,” but it is not “the graduate level of warfare.” No matter how vexing armed anthropology and endless cups of tea may be to soldiers, the challenges of counterinsurgency and counterterrorism do not compare to those of a high-tempo, high-casualty modern war. This should be obvious to even a casual student of military history, but the post-9/11 wars have generated an enormous amount of woolly thinking among both soldiers and civilians.

There are also justifiable concerns about the viability of forcible entry from the sea, the Marine Corps’ traditional mission. Since the Falklands invasion in 1982, we have seen that modern missiles will make amphibious power projection increasingly costly. The Marine Corps has taken note and for decades now has quietly been renaming schools, vehicles, and probably marching bands “Expeditionary” instead of “Amphibious.” However, America will always be a maritime nation, and “game-changing” military technologies have a mixed record.

Yet while the Senate’s requested report is asking the Secretary of Defense many of the right questions, its one attempt at an answer should be rejected outright.

A high/low mix of platforms is worth examining. Going high/low with our military services is another matter altogether.

The Army and Air Force undoubtedly want to get back to preparing to fight major wars, as they should. [This sentence and the next one should form one paragraph. Word isn’t letting me do that for some reason]. Relegating the Marine Corps to second-tier status as a counterinsurgency and advising force, however, is not in the national interest.

Militaries have historically understood that they must prepare primarily for the most dangerous and difficult operations they could face. It is far easier to shift a trained force down the range of military operations than up. The Israelis offer the most vivid recent illustration of this truth.

Before the 2006 Second Lebanon War with Hezbollah, the Israeli Defense Forces (IDF) had been focused on operations in the occupied Palestinian territories, with 75 percent of training devoted to low-intensity conflict (LIC). When this counterinsurgency force confronted well-armed, well-trained, and dug-in Hezbollah militiamen, it received a nasty wake up call: the IDF took relatively heavy casualties and was unable to decisively defeat Hezbollah or halt rocket attacks into Israel, which continued until the day of the ceasefire. The IDF quickly returned to training for stiffer fights, devoting 80 percent of its training to high-intensity conflict (HIC) after the 2006 war.

America already has a tradition of early bloody noses in major wars, from Bull Runto Kasserine Pass to Task Force Smith. Unless we want an even more catastrophic shock in our next major war, we must focus all four of our military services on major combat operations and combined arms maneuver. We should not forget the lessons of Iraq and Afghanistan, such as they are. But it is the height of folly to turn our most expeditionary and aggressive military service into a corps of advisors and gendarmes.

Instead of continuing to throw lives and money at the intractable—and strategically less important—security problems of the developing world, perhaps we should spend more time and effort avoiding such military malpractice. Let’s hope the Department of Defense concurs.