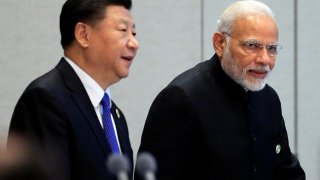 As tensions rise in South Asia, India Inc. is back into the spotlight. Calls to revisit India’s international strategy, however, have mainly focused on bolstering the Indian army and air force to defend India’s land border, and domestic economic reforms—especially Indian Prime Minister Narendra Modi’s grand vision for a self-reliant India, or Atmanirbhar Bharat. Yet, New Delhi is missing an opportunity to reform India to genuinely become more self-reliant and position itself as a major power on the international stage. In this regard, two areas have been overlooked: India’s “Act East” policy and the Indian Foreign Service (IFS).

The recent skirmishes along the Line of Actual Control emphasize how Sino-Indian relations will play a critical role in Indian foreign policy as New Delhi increasingly asserts itself internationally. Although India’s rise does not come at China’s expense, Indian policymakers must carefully consider how their Chinese counterparts might react to a more assertive India. India’s relations with South Asian neighbors are influenced by China: New Delhi views Beijing’s “Encirclement Strategy”—in which China entices South Asian governments with favorable economic, diplomatic, and military relations in order to build a strategic buffer around India—as a direct threat to Indian interests. The Belt and Road Initiative is a prime example of how Chinese loans and investment bring India’s neighbors, like Pakistan and Sri Lanka, to China’s sphere of influence.

To counter Beijing’s strategy, New Delhi must expand upon its “Act East” policy to tactfully build upon its existing economic, military, and diplomatic ties with countries which share India’s commitment to a free, open, and prosperous Indo-Pacific. Although the Indian economy is expected to grow at record-levels in the coming decades, its economic growth is not preordained. India must enhance relations with advanced economies like Australia and South Korea, and bolster political and economic connections with Southeast Asia—a region collectively positioned to be the fourth-largest economy by 2050. In addition, India should strengthen its military capabilities by expanding on its recent security partnerships and military drills with strategically-aligned nations beyond the Quadrilateral Security Dialogue. India has not traditionally looked ‘East of Malacca’, but its “Act East” policy demonstrates India’s resolution to ensure economic growth, prosperity, and peace in the region.

India has an understaffed diplomatic corps—less than 1,000 foreign officers represent the second most populous country in the world. In comparison, China has approximately 7,000 diplomats and the U.S. State Department has 14,000 foreign service officers. India cannot raise its global profile without diplomats who can effectively represent and defend Indian interests abroad. The Modi administration recognizes this need: in February, the Ministry of External Affairs began to restructure. But, recruitment still remains low as less than forty candidates are admitted annually to the elite IFS.

Many will maintain that the IFS should remain “lean;” but, if India is to translate its foreign policy ambitions into tangible deliverables abroad, it needs more diplomatic manpower. Its training and development of IFS officers is not in question—its diplomatic corps is respected around the world. Yet, India must recruit a higher number of envoys to strengthen its global clout. This is not a novel concept: criticism of an understaffed IFS and calls for more foreign service officers have been raised for years and decades. If India truly wants to become a major player in geopolitics, it must fully staff its diplomatic corps.

This is not to argue that economic or military reforms are unimportant. For India to be a consequential, global player, it will require a robust economy to support its foreign policy ambitions. Moreover, New Delhi has neither developed its military capabilities nor strategic alliances to prevent Chinese territorial aggrandizement. Yet, far too little attention has been paid to India’s “Act East” policy and its foreign service.

India should direct resources to ensure “Act East” is realized, and expand the IFS to spearhead this initiative and other foreign policies which aim to increase India’s power projection. As the Covid-19 pandemic continues to spread and conflict has erupted along India’s border in the past few months, New Delhi has revisited India Inc.’s international strategy through an economic and military lens. This is a strategic mistake: by deprioritizing the “Act East” policy and the expansion of the IFS, New Delhi is missing an opportunity to increase India’s long-term influence in the region and raise India’s global profile.

Archish Mittal is a Master’s candidate at The Fletcher School of Law and Diplomacy, with a concentration on South Asia and Islamic civilization.

Nicholas Sung is a Master of Public Policy candidate at the Harvard Kennedy School of Government focusing on U.S.-China relations and conflict prevention in the Indo-Pacific.