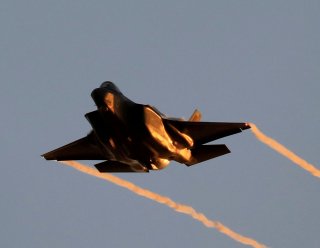 The "Special Relationship" that exists between the United States and the United Kingdom has been tested over the years, but this month it was strained even further as Republican Senator Tom Cotton (R-Arkansas) has led efforts to stop the deployment of 48 F-35 Lightning II Joint Strike Fighters to the UK. The news, which was first reported by The Telegraph newspaper, noted that this is due to Chinese telecom giant Huawei's involvement in the building of the UK's 5G mobile network.

An amendment to an annual piece of legislation determining how defense money is to be spent proposed a ban on F-35 deployments to countries – including close allies – where "at-risk" firms such as Huawei have access. The summary of the top amendment seen by the UK newspaper of record stated, "To prohibit the stationing of new aircraft at bases in host countries with at-risk vendors in their 5G or 6G networks."

In January the Chinese firm was allowed by UK Prime Minister Boris Johnson to "build non-core parts of the UK's 5G networks."

However, in 2019, the "Five Eyes" intelligence-sharing nations agreed not to use technology from the Chinese firm in the "sensitive" parts of their respective telecom networks. The Five Eyes alliance was formed in 1946 among the five English-speaking nations as a way to share security information. The U.S., Australia, and New Zealand all block the use of Chinese equipment from Huawei and ZTE from use in any government networks.

Last year, the United States also placed trade restrictions on Huawei and blocked American companies from doing business with the Chinese firm. The U.S has said Huawei represents a major security risk due to allegations that the company has ties to the Chinese state and could be forced to spy for Beijing, something the company has strongly denied.

Cotton issued directives against four Chinese telecommunications companies last month and even called up those firms to explain why the Federal Communications Commission (FCC) should not revoke their respective authorization to operate in the United States.

"No matter their cries to the contrary, these firms are beholden to the Chinese Communist Party, and their operation in the United States will continue to pose a threat to our critical networks as long as it continues," Cotton said in a statement. "Chairman Pai (of the FCC) has rightly identified the magnitude of the Chinese telecom contamination, and the FCC is taking strong steps towards eliminating it."

5G technology is more than just providing faster streaming services to smartphones. A 5G network connection is expected to provide download speeds that are 10 times faster than what 4G offers, and the long-term goal is to interconnect people as well as remotely control machines, objects and devices. 5G could lay the groundwork for the deployment of self-driving (autonomous) cars – and many technology analysts argue that self-driving cars won't even be possible without 5G.

In addition, 5G could have a number of potential military applications including command and control (C2), logistics, augmented and virtual reality for training, and for intelligence, surveillance and reconnaissance (ISR).

If a piece of amended legislation becomes law, it could in fact ban deployment of the advanced aircraft to the UK, but the U.S. Congress would still make the final decision.

"While the US will do all we can to maintain and strengthen the special relationship, protecting U.S. airmen and our national security assets must come first," Cotton told The Telegraph.

The UK has committed to buy 48 of the F-35 Joint Strike Fighters in an initial batch, with plans to buy 138 in total.

The UK parliament has reportedly questioned the U.S. threat to cancel the deployment, and Chair of the Defence Committee, Tobias Ellwood, sent a letter to the UK Secretary of State for Defence, Ben Wallace, earlier this week to ask for clarification on the calls from the U.S. Senator.

"If passed, this would preclude the long-planned U.S. Air Force [USAF] deployment of F-35s at Royal Air Force [RAF] Lakenheath, and could also bring into question the plans for HMS Queen Elizabeth to carry US Marine Corps [USMC] F-35s," the letter said stated as reported by Jane's. "I am sure you agree with me that even the airing of such disagreements between us and our closest security ally is unhelpful in a time when global stability is at the lowest it has been for a generation. I should therefore be grateful if you could clarify what the [UK] government is doing to ensure that this initiative is not pursued further."