TON: Why China Might Crush America in the Trade War 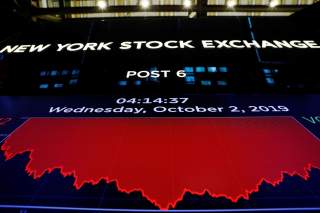 Key point: Beijing is targeting American farmers in order to undermine their support for the trade war.

The Organization for Economic Cooperation and Development (OECD) reported on September 19 that “the global economy is set to grow at the slowest pace since the financial crisis, with business investment and trade hampered by an escalating dispute between the U.S. and China that could inflict even more damage over coming years,” according to the Wall Street Journal. That can’t be good news for President Donald Trump as he heads into a challenging re-election year. The last American president to play the “tariff card,” Herbert Hoover, who signed into law the Smoot-Hawley Tariff Act, paid a bitter price at the polls in the election of 1932.

Trump seems now to be belatedly looking for an exit ramp from his “get tough on China” strategy. The big question is: does Beijing have any great incentive to assist the American president or will it adopt a waiting game to cut a better deal with a possible Democratic successor after the 2020 election? Trump’s abrasive negotiating style seems to now have caught him in a dilemma. While his political base loves the red meat of “China bashing,” will they stick with the president through the resulting economic pain?

The Trump negotiating style, as outlined most famously in his 1980s book The Art of the Deal, involves a very New York real estate brass knuckles approach—identifying your adversary’s vulnerabilities and playing upon them. There is also an element of being loudly aggressive in pushing things to the brink and then pulling back, hopefully in the process intimidating your adversary into accepting a deal which is more to your own benefit than theirs. This negotiating style is summarized in his book as follows: “MY STYLE of deal-making is quite simple and straightforward. I aim very high, and then I just keep pushing and pushing and pushing to get what I’m after.”

Never noted for modesty, Trump asserted in The Art of the Deal that he had “read hundreds of books about China over the decades.” “I know the Chinese,” he stated. “I’ve made a lot of money with the Chinese. I understand the Chinese mind.” However, the Chinese negotiating approach, which I observed while working as a diplomat at the U.S. Embassy in Beijing in the 1990s, seems quite distinct from the pushy approach outlined in Trump’s book. While the communist leadership in Beijing can engage in over-the-top Maoist, revolutionary rhetoric when need be, there is a cultural inclination to settle serious matters behind closed doors while engaging in the Chinese ritual of “drinking tea.” Most Chinese negotiators are natural-born horse traders, who are willing to come to terms with a “you scratch my back and I’ll scratch yours” deal—where a level of decorum is preserved and both sides are able to walk away “saving face.”

I have never forgotten one experience as acting consul general in Beijing. I negotiated with the Chinese Foreign Ministry over the issuance of a visa to a prominent Chinese-American who wished to visit a very sick family member but who had been banned by Beijing for human-rights activities. We struck a deal behind closed doors and the U.S. citizen got to see her dying uncle.

The Trumpian approach, in contrast, of bombastic tweets and sudden, 180 degree turns in one’s negotiating demands, is reminiscent to many Chinese of the Western barbarian bullying of the Middle Kingdom during China’s “century of humiliation.” Many Chinese have not forgotten the alleged phrase uttered by Chairman Mao on the Tiananmen Gate on October 1, 1949, upon the founding of the People’s Republic of China that “the Chinese People have stood up!” (There is considerable historic controversy over whether or not Chairman Mao actually uttered these words but, whether valid or not, the phrase has entered the folklore of the general populace.) And kowtowing to a Western barbarian does not seem to be a plausible option for Xi Jinping. I asked one Chinese friend whether there would be Tiananmen Square-like demonstrations in the streets if Xi was seen as caving in to Trump’s demands. “No need for that,” was the swift reply. “The PLA generals would have already shot him for betraying the motherland.”

The seeming confidence of Beijing leaders that they can best Trump at his own game of brass-knuckle negotiating comes from another Chinese cultural concept—eating bitterness, 吃苦. The Mandarin pinyin pronunciation for this term is chīkǔ. As the world’s two largest economies engage in a potentially gargantuan clash and a delinking after three decades of close intertwining, the potential economic fallout will hit both sides of the Pacific. Beijing’s leaders are confident however that even China’s roughly four-to-five hundred million middle class aspirants in the coastal cities, roughly one-third of the PRC’s population, can endure the hardships of “eating bitterness” more than the perceived “soft” Americans. They see the Chinese people as having endured over a century of invasion, famine, civil war, and revolution after China’s fall from the pinnacle as the wealthiest nation in the world at the time of the American Revolution. What are the hardships of one more trade war with the Americans, added to the pile of bitterness that the Chinese peasantry and proletariat have already endured?

And Beijing has strategically hit back at Trump where it most hurts—targeting with counter-tariffs the pro-Trump farm vote in key swing states like Iowa and Wisconsin, which are essential to the president’s hopes for re-election. A second key voting bloc—the Wal-Mart Moms—face rising tariff-inflicted prices for items on store shelves that are either manufactured by Chinese companies or by other Asian and American manufacturers that assemble their products in Chinese factories. Trump stated, in an August tweet, that “Our great American companies are hereby ordered to immediately start looking for an alternative to China, including bringing your companies HOME and making your products in the USA. We don’t need China and, frankly, would be far better off without them.” Disinvesting from China, however, takes time and requires a restructuring of global supply chains. In the meantime, rising prices from tariffs strike directly at the president’s working-class base.

Some Trump supporters, notably Republican Sen. Tom Cotton of Arkansas, have minimized the political costs for the president of the trade war with China. In a May 13 appearance on CBS This Morning, Cotton said: “These tariffs are going to end up hurting both Chinese and some Americans, I’ll grant you that. I think they'll ultimately hurt the Chinese more than they will in Americans, in part because the Chinese—companies and their government—have been cheating the United States for so long. There will be some sacrifices on the part of Americans, I grant you that, but I also would say that sacrifice is pretty minimal compared to the sacrifices that our soldiers make overseas that are fallen heroes that are laid to rest in Arlington make.”

So will the American farmers continue to be Trump stalwarts, as Cotton hopes, or will they be more like what Thomas Paine famously referred to as “sunshine patriots (who) shrink from the service of their country”—especially when they see soybean prices falling after having planted their crops this past spring? The Milwaukee Journal Sentinel, in an August 30 report titled “Both sides in 2020 election fight are watching farm country for political fallout from Trump tariffs,” raised some serious doubts about Cotton’s assertion that American farmers will stand by their man next year. The very fact that the article title referred to “Trump tariffs” should be alarming to the president and his supporters. “As a punishing trade war takes its toll, the Embattled Farmer has become a central figure in the looming struggle over battleground Wisconsin,” the article points out. Without Wisconsin, which voted for a Republican for president in 2016 for only the first time since 1984, the narrow electoral path to another Trump victory next year becomes virtually impossible. Add the farm vote next door in soybean and pork rich Iowa—which Trump also carried in 2016 after two Obama victories in the state—and the dilemma becomes even more apparent. While Trump may score against China in his tariff battles, these same battles may result in his loss of the overall war with the Democrats for the White House.

The relevant text for the U.S.-China trade war may not be Trump’s “The Art of the Deal” but instead Chinese General Sun Tzu’s two thousand year-old classic “The Art of War.” Sun Tzu famously noted that “If your opponent is of choleric temper, seek to irritate him. Pretend to be weak, that he may grow arrogant.”