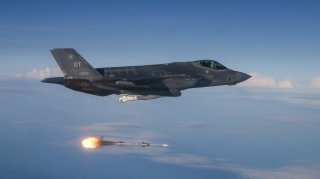 Interestingly, the recently released Top Gun Maverick movie is being widely praised for its accurate portrayal of cutting-edge military technology and Tom Cruise’s F/A-18 fighter is shown with a P5 Pod on it during the movie.

P5 SSU, Cubic explained, will be able to encrypt the Time, Space, and PositionInformation used to train with hundreds of operational F-35 stealth fighters in coordination with fourth-generation aircraft, enabling larger formations and secure collaborative training across a disaggregated force. The technical infrastructure informing Cubic’s P5 is designed to enable secure networking of data, in part through the use of software upgrades and common internet protocol standards. “Cubic’s P5 SSU solution features a low-risk, flight-proven, National Security Agency (NSA)-certified Type 1 multilevel encryptor that enables or restricts the access and transfer of information between security domains on the P5CTS without modifying the current training Concept of Operations,” a Cubic statement said.