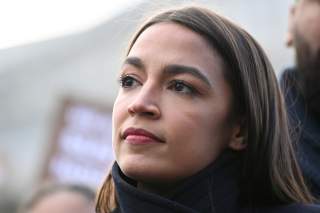 A news anchor asked Illinois Rep. Cheri Bustos, who chairs the Democratic Congressional Campaign Committee (DCCC), four times on CNN whether Ocasio-Cortez was “good for the Democratic caucus.” She declined to give a “yes” or “no” answer each time.

Ocasio-Cortez is currently feuding with the DCCC over her refusal to pay $250,000 in fundraising dues to the committee, which aims to help Democrats in House races across the country.

The division between Ocasio-Cortez and Democratic leadership was evident in Bustos’s interview Sunday morning. “Is she good for the Democratic caucus in the House?” CNN host Victor Blackwell asked Bustos, who proceeded to dodge the question.

“She has a lot of followers. I have respect for her,” Bustos said.

“She brings a new voice to Congress,” she said, before Blackwell repeated the question. Once again, Bustos did not give a straight answer.

“Look, we’ve got members from all different spectrums. I respect her and she brings a new voice, and I think that’s always welcome,” Bustos said.

“It’s interesting, I have the chairwoman of the DCCC whose job it is to support incumbents and Congresswoman Ocasio-Cortez is one. I’m asking you just a straightforward question: Is she good for the Democratic caucus in the House?” Blackwell asked again.

“Look, she brings a voice. We have members from all different spectrums of the Democratic Party,” Bustos said.

“Look, I come from a district that [President] Donald Trump won. My politics are somewhat different than hers, but she brings a voice that’s welcome,” she added. “And I have great appreciation for that.”

Blackwell said: “She raised more money in the third quarter of 2019 than any other Democrat in the House, including the speaker of the House. She has given, as she counts, $300,000 to other incumbents, including some in swing districts, and I’m asking the chairwoman of the DCCC if this member, who is right now in the top 10 of House members raising money, if she’s good for the caucus.”

“You can’t give me a straight ‘yes’ or ‘no’?” Blackwell pressed.

“Look, I have respect for all 235 of the Democrats in our caucus. She is bringing a new voice,” Bustos said, adding:

“The fact that she has raised unbelievable amounts of money and the fact that she just announced that she’s willing to help our candidates who need — who could benefit with that financial help — that’s welcome. And, look, you’re asking a ‘yes’ or ‘no’ question. I’m a former reporter, Victor, so I understand what you’re trying to get at.”

“Yes, I’m trying to get to a simple answer,” Blackwell said.

“I have respect for her, I welcome her into our delegation and I’m very happy that she’s willing to help our candidates,” Bustos said, concluding the interview without giving a straight answer to the question.