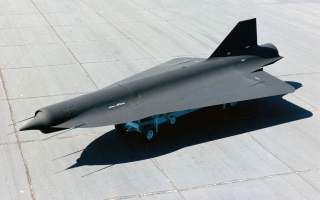 According Drendel “it wasn’t long before D-21s were spotted languishing in the Arizona sun, more than slightly incongruous among the T-34s and T-28s in neighboring parking areas. Pictures were taken, questions were asked, and various versions of what they were, what they did, where they came from, and how many were built began to emerge.”

The Lockheed D-21 was a highly-advanced, remotely piloted aircraft (RPA) designed to carry out high-speed, high-altitude strategic reconnaissance missions over hostile territory. Developed by the famed Lockheed “Skunk Works” in the 1960s, the D-21 used technology from the A-12/YF-12/SR-71 “Blackbird” family of high-speed manned aircraft. Unlike the turbojet engines in the Blackbird, however, the D-21 was powered by a ramjet.

Noteworthy as explained by Lou Drendel in his 1982 book SR-71 Blackbird In Action, very few people were aware that the Lockheed D-21 Drone even existed until several examples showed up at USAF’s military aircraft storage and disposition center at Davis-Monthan Air Force Base (AFB) in late 1976. It was an impromptu retirement party, but the fact that the D-21s were escorted to their retirement home by armed guards spoke volumes for the secret nature of their operational life.

According Drendel “it wasn’t long before D-21s were spotted languishing in the Arizona sun, more than slightly incongruous among the T-34s and T-28s in neighboring parking areas. Pictures were taken, questions were asked, and various versions of what they were, what they did, where they came from, and how many were built began to emerge.”

In its Oct. 31, 1977 issue, Aviation Week & Space Technology quoted an ‘Official’ as saying “that the drone was conceived as a subscale prototype for the initial proof-of-concept flight testing of design features that were applied to the A-11 [the A-12’s precursor].” Aviation Week & Space Technology also revealed that 38 D-21s had been built, in the time frame 1964-1967, and that they had performed the interim strategic reconnaissance mission, while the SR-71 was becoming operational. They claimed that the drone was carried aloft semi-submerged in the belly of the A-11/YF-12A, then released at altitude and speed.

Drendel continues: “Whether the drone was indeed conceived as a proof-of-concept model for the Blackbird may be open to speculation. And as long as we are speculating, is it possible that the D-21 was conceived and designed to overfly sensitive areas, thus circumventing Ike’s promise to stop manned overflights of the USSR?”

Today we know that Drendel’s theory was right.

In fact according to Air Force Test Center History Office documents, all manned flights over the Soviet Union were discontinued by President Dwight Eisenhower after Francis Gary Powers’ U-2 spy plane was shot down May 1, 1960. However even if the U.S. government was planning on using satellites for reconnaissance, the technology was still a few years away and the Central Intelligence Agency (CIA) determined unmanned drones could fill the gap until satellites became viable.

The D-21 required a mothership to launch given its ramjet engine, which needed to be air-launched at a certain speed to activate. Initially, Lockheed testers used an M-21 (essentially a variant of Lockheed A-12 aircraft) to air launch the D-21 drone. The D-21 would be launched from the back of the M-21. The D-21 was designed to carry a single high-resolution photographic camera over a preprogrammed path, then release the camera module into the air for retrieval, after which the drone would self-destruct.

However, on the fourth flight test, the D-21 experienced an “asymmetric unstart” as it passed through the bow wake of the M-21 causing the mothership to pitch up and collide with the D-21 at Mach 3.25. Crewmembers Bill Park and Ray Torick ejected from the M-21, but Torick’s flight suit became ripped and filled with water when he plunged into the ocean where he drowned.

After the accident, the M-21 launch program was cancelled but testers still believed the D-21 would make a valuable reconnaissance vehicle and decided to launch the drone from B-52Hs under a top secret test program named Tagboard. The new code name for the D-21 project became Senior Bowl.

After several failed launch attempts, the first successful D-21 launch from a B-52 occurred on Jun. 16, 1968. The drone flew 3,000 miles at 90,000 feet. After a few more flight tests, the CIA and the Air Force decided to conduct four operational launches that all ended in failure in some way. Two flights were successful, however the imagery could not be recovered from the D-21’s hatch. The other two operational flights ended with one being lost in a heavily defended area and the other D-21 simply disappeared after launch.

The D-21 program was cancelled Jul. 15, 1971, and both B-52s used for the program were returned to operational Air Force units.

As we have previously reported, in October renowned aviation artist Mike Machat was commissioned by the 412th Test Wing at Edwards Air Force Base (AFB) for a nose art to commemorate the 50th anniversary of Lockheed D-21 supersonic reconnaissance drone.