Total War: This Is What Happens If North Korea Fired A Nuclear Weapon In Anger 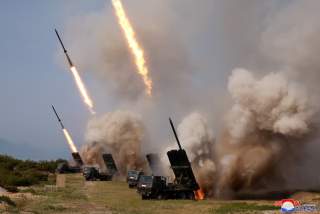 If they use a nuclear weapon, do we want to pave Pyongyang and kill a million citizens? If the intent is to take out the leadership and that can be done with precision guided munitions, is it in global interests to use nuclear weapons? The answer is unclear.

“U.S. nuclear strategy is evolving away from an automatic ‘they use nukes, we use nukes, we take out every city they have’ response,” Klingner told TheDCNF, adding that if North Korea launches a nuclear strike, “it may not be an automatic nuclear response if we can accomplish our objectives through other means.”

The decision to use nuclear weapons to retaliate against North Korea would be a political decision, one likely based on the resulting public outcry, as well as the target and whether the attack was successful or not.

“The United States maintains and updates numerous scenarios for potential military contingencies, and ones regarding North Korea are frequently reviewed,” Baker told TheDCNF, “A limited North Korean action may initially engender a large U.S. military buildup and emergency action in the United Nations, but full military intervention would not likely be far behind.”

Once war breaks out, the situation quickly becomes much more complicated. The U.S. and its allies have the advantage, but any war on the peninsula would almost certainly be a high-casualty conflict.

While South Korea and Japan have their own armed forces, they would still be largely reliant on the U.S. for defense in the event of a serious crisis. South Korea does, however, have an independent strategy known as the Korea Massive Punishment and Retaliation (KMPR) plan, the third phase of the country’s three-stage defense.

The KMPR plan involves using special forces to cripple North Korean assets and eliminate the leadership. The South would also mobilize its missile and artillery forces.

“The North’s capital city will be reduced to ashes and removed from the map,” an unnamed defense official revealed to The Korea Times, “Every Pyongyang district, particularly where the North Korean leadership is possibly hidden, will be completely destroyed by ballistic missiles and high-explosive shells.”

Japan is considering developing defensive, counter-attack capabilities, but those discussions are still in the early phases.

Relying on conventional weapons alone, North Korea is unlikely to survive a protracted military conflict, but this is where multiple weapons of mass destruction come into play.

“North Korea could potentially cause massive damage to Seoul and its surrounding areas” in a conflict, Dr. Bruce Bennett, a senior defense researcher at the RAND Corporation, previously told TheDCNF. “If North Korea restrains itself and only employs conventional weapons in an assault on South Korea, it is unlikely to overwhelm South Korea’s defenses. But if it uses weapons of mass destruction and other asymmetric approaches, the North may be able to overcome South Korean defenses — there are always large uncertainties in any war.”

“I’m confident of the outcome of that war, which would be the defeat of North Korea,” former Secretary of Defense Ash Carter told ABC reporters, “I need to caution you … This is a war that would have an intensity of violence associated with it that we haven’t seen since the last Korean War. Seoul is right there on the borders of the DMZ, so even though the outcome is certain, it is a very destructive war.”

Who Would North Korea Bomb?

The North regularly threatens nuclear war against the U.S., which is perceived in Pyongyang as the greatest threat to the country’s long-term survival. It is unlikely, however, that North Korea has developed the long-range missile technology required to strike the continental U.S.

Still, the North is working tirelessly to develop a reliable, nuclear-armed intercontinental ballistic missile and may be there in a matter of years.

“There is a real possibility that North Korea will be able to hit the U.S. with a nuclear-armed missile by the end of the first Trump term,” K.T. McFarland, the deputy White House national security adviser, previously remarked.

“We don’t know where they are on the path, but we know what path they are on,” Klingner told TheDCNF.

North Korea has launched satellites using Taepodong-style rockets, which could potentially serve as the technological foundation for an ICBM. The country has developed improved rocket engines that are better than most experts previously suspected. Also, the North appears to be working on two road-mobile ICBMs, the KN-08 and KN-14.

But, while the North has made clear progress, they have not yet demonstrated re-entry vehicle capability, and they are still developing a suitable nuclear warhead.

Were North Korea to launch a nuclear-armed missile at a foreign enemy, the two countries most likely to find themselves in the cross hairs are South Korea and Japan, collectively home to roughly 180 million people and around 75,000 U.S. troops. In the event that North Korea decided to fire on either of these two countries, a decision which the North would not take lightly, the Korean People’s Army could strike military bases and strategic assets, densely-populated civilian targets, or both.

Particularly disconcerting is that “the North Koreans say both,” Lewis explained to TheDCNF. “They hope the shock will cause us to recoil, and if it does not, they hope the damage slows us down.”

Several years ago, Pyongyang vowed that Tokyo would be “consumed in nuclear flames,” and early last year, the North threatened to turn Seoul into a “sea of flames.” Such threats are extremely common.

At the same time, North Korea has threatened, and even trained, to strike strategic assets, major ports, and critical military bases.

Days after the U.S. and South Korea announced plans to deploy a Terminal High Altitude Area Defense (THAAD) missile shield on South Korean soil, the North said it would turn Seongju, the deployment site, into a “sea of fire and a pile of ashes.”

When U.S. troops conduct joint military drills with allies for a possible conflict on the Korean peninsula, North Korea often drills as well, typically for a conventional or nuclear strike on allied troops, weapons, and defense systems.

During last year’s Foal Eagle drills, annual joint military exercises between the U.S. and South Korea for a contingency on the peninsula, North Korea launched two short-range missiles into waters off its east coast. “If we push the buttons to annihilate the enemies even right now, all bases of provocations will be reduced to seas in flames and ashes,” the North’s state-run Korean Central News Agency reported at the time. Images of the maps from the launch and open source analysis indicate that the Korean People’s Army was rehearsing an attack on the port of Busan, where the USS Ohio, a nuclear-powered submarine, had just arrived for a port call.

North Korea fired four extended-range scuds into the Sea of Japan during this year’s drills. KCNA reported that the artillerymen of the KPA were “tasked to strike the bases of the U.S. imperialist aggressor forces in Japan.”

Open-source analysis of the maps shown in the North Korean propaganda videos following the launch suggested that North Korea was simulating a nuclear attack on U.S. Marine Corps Air Station Iwakuni in Japan, where the only forward-deployed squadron of Marine Corps F-35s is stationed.

“North Korean missiles, while improved, are still not all that accurate. Thus, while Pyongyang may prefer to target U.S. military facilities in Japan with its limited nuclear arsenal, it may also choose to fire some missiles toward large population centers in an attempt to rapidly shift the political cost of conflict,” Baker told TheDCNF. “Pyongyang is less likely to use its nuclear arsenal in strikes on South Korea, but may use chemical weapons to disrupt and slow any U.S. advance,” he further commented.

Why Would North Korea Launch A Nuclear Missile?

North Korea believes that nuclear bombs are the only things that can guarantee the country’s survival.

North Korea asserts that it fears nothing and will obliterate the U.S. and its allies with its “treasured nuclear sword,” yet the reality is that Pyongyang is deeply concerned that it may one day cease to exist, that it will be destroyed by the U.S. and its strategic partners. As its future is perpetually uncertain, the North believes that the only viable long-term security option is the development of nuclear weaponry.

Kim Jong-un’s fears are major factors in whether or not North Korea decides to launch a nuclear strike against another country. “I think that Kim Jong-un will press the button if his rule and his dynasty are threatened,” Thae Yong-ho, a former North Korean official who defected last year, explained. “He may do anything.”

“Putting this in a North Korean perspective, they see themselves as facing the world’s largest single military and nuclear power in a potential conflict. The pursuit of nuclear weapons, then, is intended as a deterrent, to counter their weaker military position,” Baker explained.