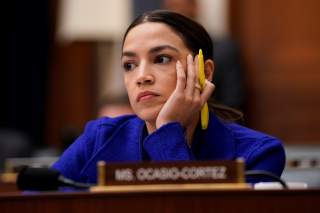 When a dozen of conservatism’s best minds take on Socialism and expose it for the utopian fraud it is, attention must be paid.

The experts examine socialism in its many guises, beginning with Charles Cooke’s blunt assessment that socialism is not and never can be “democratic.”

Cooke, the editor of NationalReview.com, writes that voters should not be fooled by the left’s attempt at rebranding.

“There is no sense in which socialism can be made compatible with democracy as it is understood in the West.” At worst, says Cooke, “socialism eats democracy, and is swiftly transmuted into tyranny.” At best, socialism “stamps out individual agency, places civil society into a straitjacket of uniform size, and turns representative government into a chimera.”

Cooke’s description of socialism as tyrannical was confirmed by Ugo Okere, a socialist candidate for the Chicago City Council, who explained that “democratic socialism, to me, is about democratic control of every single facet of our life.”

That would mean, presumably, rewriting the first words of the Constitution to something like, “We the people of the United States in order to form a more democratically controlled Union … ”

What has Okere’s “democratic control” produced in the socialist “paradise” of Venezuela?

Ricardo Hausmann, the former chief economist of the Inter-American Development Bank, has written that “Venezuela’s economic catastrophe dwarfs any in the history of the U.S., Western Europe or the rest of Latin America.”

How catastrophic? Under Chavez-Maduro socialism, the child mortality rate has increased 140%. Ninety percent of Venezuelans now live in poverty. This year inflation will hit an unbelievable 10 million percent. (That is not a typographical error.) All this in a country with the world’s largest proven oil reserves—far greater than those of the United States.

Whatever you do, he warns, don’t be seduced by socialists bearing promises. But if you are seduced, “get out before it’s too late. You have nothing to lose but your chains.”

The distinguished author Joshua Muravchik, a fellow at the World Affairs Institute, takes a historical approach to the myths of socialism.

He writes that the initiator of Soviet terror, tyranny, and violence was its founding father, Vladimir Lenin, who exhorted his followers to exert “merciless mass terror against kulaks, priests, and White Guards; persons of doubtful standing should be locked up in concentration camps” (i.e., the Gulag).

To what end? Not just to accumulate political power, but in pursuit of a sacred mission—a socialist world.

When the farmers resisted collectivization, Lenin’s successor, Josef Stalin, engineered a famine in which at least 5 million and perhaps as many 10 million starved to death—the Holodomor.

If Stalin was “a tyrant of stupefying brutality,” writes Muravchik, he was outdone by Communist rulers Mao Zedong, whose Cultural Revolution resulted in at least one million deaths, and Pol Pot, who wiped out one-fourth of Cambodia’s population in his attempt to emulate Mao.

Why did they kill so many? Muravchik provides the answer: “It was their devotion to an ideal [socialism] that prompted them to slaughter millions of unresisting innocents.”

Economist Jeffrey Tucker begins with the damning comment: “Among the most conspicuous of socialism’s failings is its capacity to generate vast shortages of things essential for life.”

In Maoist China, he points out, there was no meat and no fat in which to cook anything. In Bolshevik Russia, there was never enough housing or food, not even loaves of bread.

What happened when Nikita Khrushchev took over as Soviet leader following Stalin’s death in 1953? He and his colleagues tried desperately to “cobble together” a system of planning that made sense without relying on “bourgeois” market forces.

They failed miserably. In Tucker’s words, Khrushchev “spent his last years as a discredited, dejected, and sad old man on a park bench.”

If you love deprivation, constriction, and general limits on material aspirations, says Tucker, plus a “tyrannical ruling class that oppresses everyone else, you will love what socialism can and does achieve.” Indeed, he concludes, “misery seems to be its only contribution to economic history.”

Socialists, says National Review correspondent Kevin Williamson, are guilty of a fatal conceit: They think they can develop a system so powerful that it can consider every variable in society and propose scientific answers “about how many acres of potatoes to plant, and when and where to plant them.”

But free-market economists Ludwig von Mises and F. A. Hayek (a Nobel Laureate) showed that “complete knowledge was not attainable on social, economic, or political questions.”

Therefore, says Williamson, the more intelligent and non-ideological governments have largely given up on central planning.

Even the Nordic social democracies, so dear to the self-styled socialists of the United States, “mostly have been divesting themselves of state enterprises.”

Reasonably successful state-run enterprises, such as the Swiss railroads, “have been converted into stock corporations or reformed in other market-oriented ways.”

The subtitle of Hayek’s last work “The Fatal Conceit” is “The Errors of Socialism.” Sen. Bernie Sanders, I-Vt., and Rep. Alexandria Ocasio-Cortez, D-N.Y., have failed to learn from those errors, says Williamson, asserting that “you cannot call yourself the party of science and the party of socialism too. You have to choose one or the other.”

Socialists flaunt their compassion, argues former National Review Editor-in-Chief John O’Sullivan, because it gives them an excuse to impose their will on others “unlawfully and even murderously.”

Modern socialists tend to disapprove of placing conditions on aid to the poor—“workfare”—viewing the receipt of aid as “an unqualified right.”

That sounds generous, says O’Sullivan, but it traps the poor “in long term dependency” and undermines what the scholar Shirley Letwin calls the “vigorous virtues” among their neighbors.

Before a single socialist regime had established itself, says O’Sullivan, 19th-century writers like Fyodor Dostoevsky, W. H. Matlock, and Rudyard Kipling saw “the horrors that lay concealed within socialism’s humanitarian promise.” Their examination of country after country refutes the fraying excuse that socialism has never been tried.

In the later stages of Soviet Communism, for example, a woman would sell herself for a pair of jeans; in Venezuela today, “people exchange family heirlooms for a little food.”

Although the French welfare state is often offered as a shining example of progressivism, Pascal-Emmanuel Gobry, a fellow at the Ethics and Public Policy Center, declares you must look at “actual France, not the fantasy France of progressive propaganda.”

He challenges the French elite who believe they have the right “to order society for the benefit of everyone.”

Given the results of their leadership—low growth, mass unemployment, social strife, and a general mood of pessimism—Gobry suggests that “they might want to rethink their idea of progress.”

BT (Before Thatcher), the Great Britain of the 1970s was generally described as “the sick man of Europe,” due to its prolonged experiments with statism and the pervasive stagnation they produced.

In 1960, according to historian Andrew Stuttaford, the U.K. boasted Europe’s most productive economy, but that was before the Labour Party came to power and nationalized almost every industry in sight.

The mid-1970s were hard on most Western economies, but the U.K. “appeared to be in a hell of its own,” says Stuttaford. Inflation shot up 300%. Gross domestic product fell, unemployment rose, the pound crumbled, industry buckled, “and some of Britain’s best and brightest headed for the exit.”

The winter of 1978 was characterized by grotesque images—the dead unburied, the sick untreated, the trash piling up in the streets.

Her message: “The problem with socialism is that you eventually run out of other people’s money.”

Markets, not bureaucrats, are better for the environment, asserts Shawn Regan, a fellow at the Property and Environment Research Center, pointing out that Eastern Europe and the Soviet Union “were the most polluted and degraded places on earth.”

He quotes the economist Murray Feshbach and journalist Alfred Friendly Jr. as writing that when historians conduct an autopsy of Soviet Communism, “they may reach the verdict of death by ecocide.”

Closer to home, says Regan, the attempts of Cuban socialists to maximize production at all costs “has caused extensive air, soil, and water pollution.”