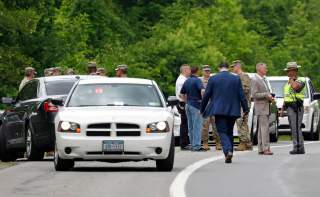 A West Point cadet was killed in a tactical vehicle rollover Thursday that injured 20 other cadets and two soldiers, the U.S. Military Academy has announced.

The Light Medium Tactical Vehicle was involved in an accident around 6:45 a.m. Thursday near the Camp Natural Bridge training site, West Point said in a tweet.

Those injured in the accident have been taken to local hospitals, an academy statement said. No information was immediately available on the severity of their injuries.

The incident is under investigation.

"My heart breaks for all those involved in this tragic training accident at West Point this morning," New York Gov. Andrew Cuomo said in a statement. "These courageous cadets and soldiers represent the best of New York State and our country, and we owe them a debt of gratitude for their bravery in choosing to serve our country and protect our freedoms. This incident is made all the more heart wrenching as we commemorate the 75th anniversary of D-Day today, a day where we remember those who gave their lives for our country."