Trevor Noah to Hillary Clinton: ‘How Did You Kill Jeffrey Epstein?’ 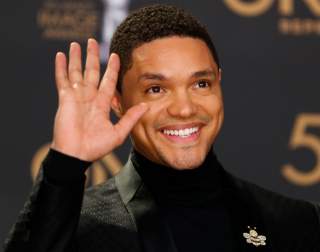 “The Daily Show” host Trevor Noah asked Hillary Clinton how she killed Jeffrey Epstein during a Thursday interview with the former secretary of state and her daughter, Chelsea.

The comedian’s question was a play on a conspiracy theory that the Clintons had some kind of involvement in the death of Epstein to cover up their connections to the convicted sex trafficker.

“I have to ask you a question that has been plaguing me for a while: How did you kill Jeffrey Epstein?” Noah asked, met by laughter from his audience.

“Because you’re not in power, but you have all the power. I really need to understand how you do what you do, because you seem to be behind everything nefarious and yet, you do not use it to become president,” he continued. “Honestly, what does it feel like being the boogeyman of the right?”

“Well, it’s a constant surprise to me. Because the things they say — and now, of course, it’s on steroids with being online — are so ridiculous, beyond any imagination that I could have. And yet, they are so persistent in putting forth these crazy ideas and theories. Honestly, I don’t know what I ever did to get them so upset,” Clinton said.

Epstein, 66, was found dead in his jail cell Aug. 10. Law enforcement sources and the Bureau of Prisons told ABC News the disgraced financier had committed suicide.

Forensic pathologist Dr. Michael Baden, however, told “Fox & Friends” on Wednesday that another review of Epstein’s body revealed evidence that “points toward homicide, not suicide.” Baden was hired by Epstein’s family to investigate his death.