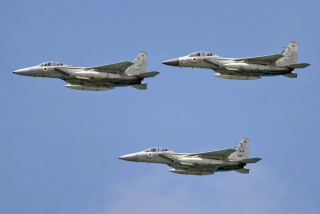 The answer the questions is that IAF personnel had the foresight to realize the full potential of Baz multirole capabilities when the F-15 was selected. Moreover plans to upgrade the capabilities of the aircraft were immediately undertaken once it entered service with the IAF.

When Israeli Air Force (IAF) picked the F-15 the service was not only evaluating the aircraft air-to-air capabilities, but also if the Eagle design offered the flexibility to be an all-weather strike fighter. After having been modified to perform long-range precision strike missions in the 1980s, the Baz (as IAF named its F-15s)shocked the world in 1985 when the aircraft performed the longest air strike in IAF history.

On Sep. 25, 1985 Force 17, a section within Palestine Liberation Organization (PLO) killed three unarmed Israeli civilians who were holidaying on their yacht off Lanarca, Cyprus. In response to the unprovoked murder of the three Israeli civilians, on Oct. 1, 1985, the IAF launched “Operation Mivtza Regel Etz (Wooden Leg)” from Tel Nof Air Base against PLO headquarters in Hammam al-Shatt, Tunisia, located about twelve miles from the capital, Tunis.

As explained by Donald J. McCarthy, Jr. in his book “The Raptors All F-15 and F-16 aerial combat victories,” the mission would have been not only the longest air strike conducted by IAF since Entebbe in 1976, but also the first time the F-15 Baz was used as fighter bomber. To accomplish the long range mission (which would have seen the aircraft flying more than 1,280 miles over open water) two modified Boeing 707 tankers from Desert Giant squadron would meet the strike aircraft over the Mediterranean Sea.

A specially suited Boeing 707 airborne command post would have directed the mission.

The F-15s from Spearhead Squadron were the Eagles selected to perform the mission. Since the actual air strike was to be performed by two flights of F-15s loaded with GBU-15 electro-optical glide weapons, the aircraft and aircrews for Operation Wooden Leg were all “GBU-15 qualified.” Noteworthy the GBU-15 is a highly maneuverable weapon and feature an optimal, low-to-medium altitude delivery capability with pinpoint accuracy.

The air strike was accomplished in six minutes and destroyed almost the entire PLO complex, including PLO’s chairman bureau and the headhunters of Force 17. Furthermore between sixty and a hundred terrorists were killed and another seventy were wounded. The attack was such a surprise that Tunisian and Syrian Air Forces were unable to intercept the F-15s. Actually IAF aircraft were not even attacked by anti-aircraft defenses within the complex.

Worldwide condemnation of Israel’s attack against Yasser Arafat’s PLO was swift and unrelenting: strong objections against Operation Wooden Leg came not only from Middle East countries and the United Nations (UN), but also from Israel strongest ally, the U.S.

But, as told by McCarthy Jr., the burning questions for Israel enemies were: “How did Israel carry out the longest range attack in its history? How were they able to avoid detection from Egyptian and Libyan radar units, and even from U.S. Navy ships deployed int the Mediterranean?”

The answer the questions is that IAF personnel had the foresight to realize the full potential of Baz multirole capabilities when the F-15 was selected. Moreover plans to upgrade the capabilities of the aircraft were immediately undertaken once it entered service with the IAF.

Nevertheless, many still believe that the F-15s involved in Operation Wooden Leg were F-15E Strike Eagles.

Instead the strike package that carried out Operation Wooden Leg was made by IAF F-15Cs and Ds modified in the summer of 1985, well before the introduction of the first F-15Es in April 1988. In fact, even if many important aspects of Operation Wooden Leg are still classified, modifications such as the addition of conformal fuel tanks (CFTs) gave the F-15s the ability to undertake long range missions. Other improvements included advanced avionics and radar, weapons control and electronic warfare systems.