True or False? Fact-Checking Trump’s Claims in the State of the Union 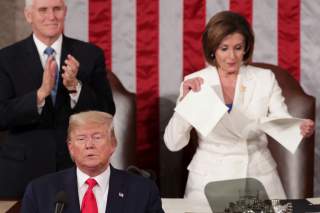 In a night of high emotion, President Donald Trump used his third State of the Union address to tout the “great American comeback” during his first three years in office.

Before the night was over, Trump had staged the surprise reunion of a soldier deployed to Afghanistan with his family and announced a scholarship for the daughter of a single mother; first lady Melania Trump had presented legendary talk radio host Rush Limbaugh with the Presidential Medal of Freedom; and House Speaker Nancy Pelosi had ripped up a copy of the president’s remarks.

Trump delivered the address Tuesday night before a joint session of Congress on the eve of his likely acquittal in the Senate impeachment trial. He is only the second president in history, after Bill Clinton in 1999, to make the annual speech during an impeachment trial.

Amid all the emotion, here are some fact checks of key parts of the president’s speech, which lasted about an hour and 18 minutes.

According to Poynter Institute’s PolitiFact in 2017, “the United States has lost more than 60,000 factories since 2001.”

Trump made a similar claim in 2017, mentioned by PolitiFact, laying the blame on China’s joining the World Trade Organization in 2001 for the decline in factories. The president said at a rally in Kentucky: “Since China joined—that’s another beauty—the WTO in 2001, the U.S. has lost many more than 60,000 factories.”

According to the Bureau of Labor Statistics, 356,046 manufacturing establishments existed in the second quarter of 2019, the most recent quarter available.

2. “ … the United States has become the No. 1 producer of oil and natural gas in the world, by far.”

The Trump administration has taken steps to deregulate the oil industry, and the industry has been booming because of technological innovation.

Oil production in particular has exploded in the past decade, thanks largely to the revolution in hydraulic fracking technology that has allowed oil drillers to tap into massive shale oil reserves.

According to The Wall Street Journal, in late 2018 the U.S. became a net exporter of oil for the first time in nearly 75 years:

More than that, the U.S. also became the world’s largest producer of oil in 2018, according to the Energy Information Administration, as a result of a rapid increase in production that began in 2011.

“U.S. crude oil production, particularly from light sweet crude oil grades, has rapidly increased since 2011,” according to EIA. “Much of the recent growth has occurred in areas such as the Permian region in western Texas and eastern New Mexico, the Federal Offshore Gulf of Mexico, and the Bakken region in North Dakota and Montana.”

The Hispanic unemployment rate fell to 3.9% at the end of the the third quarter of 2019, a record low, according to CNBC, which also reported a record low for unemployment for African Americans at 5.5%.

Last year, African American youth unemployment reportedly dropped to the lowest rate since it was first tracked in the early 1970s. In July, the unemployment rate for blacks between ages 16 and 19 dropped to 17.7%.

The unemployment rate for Asian Americans hit a record low in July 2019, according to the Associated Press, falling to 2.1%.

Trump has talked many times before about the decline in the poverty rate for African Americans. PolitiFact, in 2018, said this is accurate.

According to numbers from the Department of Agriculture, 10.7 million more Americans were on food stamps when President Barack Obama left office in January 2017 after eight years. (The official name of the program is the Supplemental Nutrition Assistance Program, or SNAP.)

“In 2009, when Obama entered office, 33,490,000 Americans were on food stamps. Eight years later that number had increased to 44,219,000, an increase of nearly 11 million,” reported The Washington Free Beacon. “Recipients of the program received a monthly benefit of about $125. The Department of Agriculture has noted that changes to food stamp policies made it easier to receive benefits.”

The Trump administration restored stricter work requirements for welfare recipients that had been curtailed during Obama’s presidency.

5. “After decades of flat and falling incomes, wages are rising fast, and, wonderfully, they are rising fastest for low-income workers, who have seen a 16% pay increase since my election. This is a blue-collar boom.”

At the end of 2019, the Atlanta Federal Reserve’s wage-growth tracker showed that “the lowest-paid workers have been experiencing higher median wage growth.”

“[F]or workers in lower-wage jobs, their relative median wage over the 2000s has deteriorated, and that erosion has reversed course only in the last few years,” the Atlanta Federal Reserve said.

“This reverses the pattern seen in the wake of the Great Recession, when median wage growth for lower-paid workers slowed by more than for workers overall.”

Pay for the bottom 25% of wage earners rose 4.5% in November from a year earlier, according to the Federal Reserve Bank of Atlanta. Wages for the top 25% of earners rose 2.9%. Similarly, the Atlanta Fed found wages for low-skilled workers have accelerated since early 2018, and last month matched the pace of high-skill workers for the first time since 2010.

6. “Before I took office, health insurance premiums had more than doubled in just five years. I moved quickly to provide affordable alternatives. Our new plans are up to 60% less expensive.”

Trump was citing numbers from a Department of Health and Human Services study from May 2017 that found average health insurance premiums had doubled since 2013.

The analysis, under the Trump administration, was based on data compiled during the Obama administration and produced by the HHS Office of the Assistant Secretary for Planning and Evaluation.

In addition, all 39 states using the Obamacare exchanges on HealthCare.gov saw an increase in individual market premiums from 2013 to 2017. Three states—Alaska, Alabama, and Oklahoma—saw premiums triple, the HHS analysis found.

With regard to plans costing 60% less under the Trump administration, the president was referring to a new rule in 2018 that allowed Americans to buy short-term health insurance plans to last for 364 days, and renewable for up to three years.

7. “One hundred thirty-two lawmakers in this room have endorsed legislation to impose a socialist takeover of our health care system, wiping out the private health insurance plans of 180 million Americans.”