True Story: What Happened When the Soviet Union shot down Francis Gary Powers’ U-2 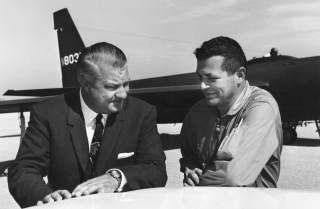 The Soviets were especially dangerous if they knew the U-2 was coming. According to an official protest subsequently lodged with the US government by the foreign minister of Afghanistan, for violating their sovereign airspace on the way north, the Soviets provided an early warning of the spy plane’s incursion.

It was around 6:20 on Sunday May 1, 1960 when a member of the crew pulled the ladder away and slammed the canopy shut. The pilot then locked it from the inside. As Francis Gary Powers taxied on to the runway out of Peshawar air base, Pakistan and carefully guided the U-2C, model 360, into the air, the J75/P13 engine roared with a distinctive whine. He never lost the thrill of hearing the familiar sound.

Quickly climbing toward his assigned altitude and switching into autopilot for his twenty-eighth reconnaissance mission, he headed toward Afghanistan and initiated a single click on the radio. Seconds later, he heard a single click as confirmation. As explained by Francis Gary Powers Jr. and Keith Dunnavant in their book Spy Pilot, this was his signal to proceed as scheduled, in radio silence.

Determined to pack as much surveillance as possible into one flight, Powers was scheduled to cross over the Hindu Kush range of the Himalayas and into the southern USSR, passing over a 2,900-mile swath of Soviet territory, from Dushambe and the Aral Sea, to the rocket center of Tyuratam, and on to Sverdlovsk, where he would head northwest, reaching the key target of Plesetsk facility to judge the Soviet ICBM progress before turning even farther northwest, toward the Barents Sea port of Murmansk. Exiting to the north, he was to land in Bodo, Norway, where a recovery team was waiting to transport the U-2 and secure the pilot. In the case of an emergency, such as running low on fuel, he was authorized to take a shortcut into the neutral nations of Sweden or Finland, which would be sure to cause complications for Washington. But as it was remarked at the time, “Anyplace is preferable to going down in the Soviet Union.”

The Soviets were especially dangerous if they knew the U-2 was coming. According to an official protest subsequently lodged with the US government by the foreign minister of Afghanistan, for violating their sovereign airspace on the way north, the Soviets provided an early warning of the spy plane’s incursion.

After flying into the thin, cold air of the stratosphere, Frank was no longer sweating in his pressure suit but he felt his pulse quicken. He always felt a bit uneasy crossing into the USSR. Nine hours was a long time to be in the air, nearly all of it over enemy territory, and the pilot realized he had never been more vulnerable.

Because his sextant—a device used to measure distance based on the angular width between two objects—had been set for a 6 a.m. departure, rendering all of the values off by nearly a half hour, Frank would have to rely heavily on his compass and clock to navigate. For about the first 90 minutes, he encountered heavy cloud cover, which made it more difficult to stay on course.

About the time the sky below turned into a blanket of blue, he saw something in the distance: the contrail of a single-engine jet aircraft, headed in the opposite direction, at supersonic speed. Soon he saw another contrail, heading toward him, at supersonic speed. He assumed it was the same plane, having turned around to follow him.

“I was sure now they were tracking me on radar; he said, relieved by the enormous distance, which reflected the jet’s inability to approach the U-2’s altitude. “If this was the best they could do, I had nothing to worry about.”

The scramble to deal with the invader eventually reached the Kremlin. It was still early morning Moscow time when Premier Khrushchev’s telephone rang.

Khrushchev told Soviet defense minister Rodion Malinovsky: “You must do your very best! Give it everything you’ve got and bring that plane down!”

After telling his leader that a new SA-2 battery was stationed along the plane’s apparent route, Malinovsky said, “We have every possibility of shooting the plane down if our anti-aircraft people aren’t gawking at the crows!”

After switching on the camera while flying over the Tyuratam Cosmodrome, the launch site for Soviet space shots which had been confirmed and extensively photographed in previous U-2 missions, Powers worked through a slight course correction and proceeded north, eventually getting a nice view of the snow-capped Ural Mountains, the geo-graphic dividing line between Europe and Asia, to his left.

Passing various landmarks, he made notations for his debriefing. When his autopilot malfunctioned—a problem considered significant enough to consider aborting a mission—he switched it off and began flying the plane manually. The choice to head back or proceed was his, but since he was more than 1,300 miles into Soviet territory, he made the fateful decision to keep going. He had gone too far to turn back now.

Almost four hours into the flight, just southeast of Sverdlovsk, while recording figures in his flight log, he felt a thump. A violent shockwave reverberated through the aircraft as a bright-orange flash lit up his world.

Losing a U-2 over the Soviet Union was the nightmare scenario, and Francis Gary Powers was not dreaming.

Pulling tight on the throttle with his left hand while holding the wheel steady with his right, Powers checked his instruments. Everything looked normal. Then the wing tipped and the nose dropped. Suddenly realizing he had lost control of the aircraft, he felt a violent shudder, which jostled him from side to side in his seat. He believed the wings had broken off.

With what remained of his craft spinning out of control, Kelly Johnson‘s once-powerful machine was now overpowered by immutable gravity, and Powers reached for the self-destruct button, which worked on a 70-second delay timer, and prepared to eject. Then he changed his mind, pulling his finger back. Slammed forward by the enormous g-forces, in a suit that had inflated when the cabin lost pressurization, he immediately reached a rather-disheartening conclusion: If he ejected from this awkward position, the impact of his legs on the canopy rail would sever both of his legs, because they were trapped underneath the front of the cockpit.

Quickly thinking through his options, as the plane descended below 35,000 feet, Frank jettisoned the canopy, which flew off toward the heavens, and decided to climb out of the cockpit. When he released his seat belt, the resulting force threw him out.

But this solution created another problem: Because he was still tethered to his oxygen supply, and because the g-forces were so severe, he could no longer reach the self-destruct buttons. Even as his faceplate frosted over in the extreme cold, he fumbled in the dark on a bright sunny day, extending his fingers as far as they would go. No luck. Now he had no way to destroy the plane, to keep it from falling into enemy hands.

Somehow he broke free from the oxygen hose and eventually felt a jerk, which yanked him forward. His parachute opened automatically at 15,000 feet and he descended slowly toward the countryside, near a small village.

“I was immediately struck by the silence,” he later recalled. “Everything was cold, quiet, serene. . . . There was no sensation of falling. It was as if I were hanging in the sky.”