Trump’s Alleged Trade Deal with China Would Fix Nothing 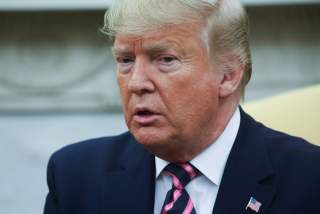 Whiplashed followers of the on-again, off-again U.S.-China trade negotiations might want to tighten their neck braces this morning. In what has become a familiar pattern, yesterday the Trump administration was reported to have reached a “Phase 1” deal with Beijing to quell the trade war. Today, those reports are being called premature.

The alleged terms of the alleged deal include the United States pulling the plug on tariffs tentatively scheduled to take effect this Sunday and cutting in half punitive tariffs already in place in exchange for Beijing’s agreement to purchase some $50 billion of U.S. agricultural goods and open further China’s financial services markets to foreign firms.

If this is accurate, it would represent a much bigger concession than Trump was willing to make in October—and would confirm the futility of the mindless tariff war as a tactic to discipline Beijing’s objectionable behavior. The “agreement” does absolutely nothing to address the root cause of the trade war. If you’ll recall, the president first imposed tariffs in the summer of 2018, as a result of a formal investigation under Section 301 of the Trade Act of 1974, which found fault with a variety of Chinese practices, including intellectual property theft and forced technology transfer.

Ever since the beginning of the tit for tat, the focus of negotiations has been on tangential issues, such as market access, trade balances, currency practices—everything EXCEPT those objectionable IP and technology practices.

The United States and China are locked in a race for technological preeminence, which raises all sorts of strategic and security concerns that can no longer be dismissed cavalierly. When considered measuredly, these concerns—which are obviously prone to hyperbole and hyperventilation—suggest that there may be limits to the scope and nature of ongoing bilateral cooperation. But that doesn’t mean relations have to continue to deteriorate.

Regardless of whether a deal is reached this week or next year, or whether that deal plays out in a series of phases, the real problems afflicting the U.S.-China relationship will persist for a long time. Navigating this relationship is going to be tricky going forward. But U.S. policymakers should remember that their toolboxes include scalpels, not just shotguns, and that many of the problems we face can be mitigated surgically. The trade war is just a costly distraction.