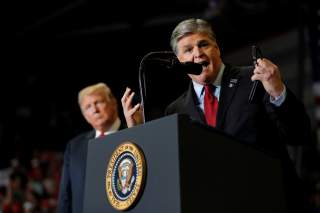 Donald Trump had a presidential pivot this week, shifting aim from his usual enemies in the press to what has long been his favorite network, Fox News.

“HOPELESS & CLUELESS! [Fox News] should go all the way LEFT and I will still find a way,” Trump said in a series of tweets on Wednesday. “The New @FoxNews is letting millions of GREAT people down! We have to start looking for a new News Outlet. FOX isn’t working for us anymore!”

Despite his regular cheerleading of the network, and continued support from reliable Fox acolytes like the hosts of Fox & Friends, as well as Sean Hannity and Jeanine Pirro, President Donald Trump has noticeably soured on Fox News as of late.

“Fox is a lot different than it used to be,” he noted last week. “There’s something going on at Fox, I’ll tell you right now, and I’m not happy about it.”

He added that he didn’t understand why there were negative polls about him on Fox News, or why the network was “pivoting” to the Democrats by hiring former DNC Chair Donna Brazile and broadcasting town halls featuring Democratic presidential candidates.

Trump has insulted specific Fox News anchors, including “low ratings Shep Smith” and the “pathetic” Juan Williams who is also “nasty and wrong.”

“What he really means is, ‘I need to have more opinion people who espouse more opinions,'” said Cameron, now a correspondent for a progressive site, Front Page Live. (Joe Romm, the founder and editor-in-chief of Front Page Live, is also a reporter at ThinkProgress.) “[Trump’s tweets are] the kind of thing that makes the news department at Fox News, where I worked for a number of years, sick to their stomachs.”

“News people don’t like to hear that stuff,” Cameron continued. “The entertainment side, one the other hand, is vastly different and it’s a threat to them. And Trump is basically challenging the Sean Hannitys of Fox News to beat up on their journalists. That’s not going to work either.”

But Trump needs to be careful with his attacks on Fox News. The president is performing poorly in polls that match him up against potential Democratic challengers in the 2020 election, and that could become more problematic if the U.S. creeps into a recession.

As a USA Today and Suffolk University poll shows, in a mock 2020 matchup Trump earns more than half his support from those who trust Fox more than any other network. Among those who “strongly approve” of Trump, 60% prefer Fox to any other outlet.

All of that means that there’s a significant overlap between Trump supporters and Fox News viewers, and no other conservative network comes close to matching the reach that Fox has. So, for Trump to marshal his base to win reelection, he’s going to need all the help from Fox that he can get.

Luke Barnes covers politics and the far right. He previously worked at MailOnline in the U.K., where he was sent to cover Belfast, Northern Ireland and Glasgow, Scotland. He graduated in 2015 from Columbia University with a degree in Political Science. He has also interned at Talking Points Memo, the Santa Cruz Sentinel, and Narratively.

This story was originally published in ThinkProgress.