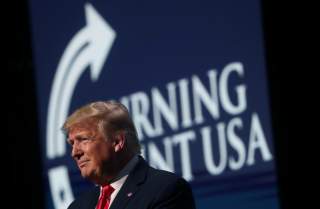 President Donald Trump’s reelection campaign raised over $45 million in the fourth quarter of 2019, a senior member of the campaign said Thursday.

“President Trump’s unprecedented fundraising is testament to his wide grassroots support and his stellar record of achievement on behalf of the American people,” Trump’s campaign manager, Brad Parscale, said in a statement Thursday.

The $46 million Trump raised in the fourth quarter was the amount raised only by the president’s reelection campaign, so it does not include whatever amount the Republican National Committee pulled in over that period.

He added: “Democrats and the media have been in a sham impeachment frenzy and the president’s campaign only got bigger and stronger with our best fundraising quarter this cycle.”

Trump will begin 2020 with $102.7 million, Reuters reported. The fundraising effort is thanks in part to Trump’s decision to keep his campaign apparatus online after taking winning in 2016 instead of winding down the campaign, the report noted, citing unnamed campaign officials.

Former President Barack Obama pulled in roughly $81.8 million when he began his reelection year at the end of 2011, Reuters noted, citing the official. Trump saw a stiff uptick in donations during the House of Representatives’s attempt to impeach him for abusing power.

Impeachment was a boon for the president’s campaign arm. Trump managed to raise $10 million in one week leading up to the House Democrats decision to advance an impeachment inquiry.