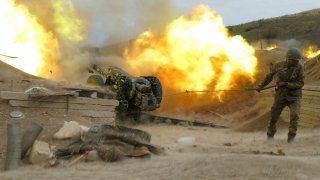 For the last ten days, the Independent Republic of Artsakh has been under attack. Nestled between its sister nation Armenia and longtime adversary Azerbaijan, the autonomous region known as Nagorno-Karabakh is at war for its existence. Sadly, U.S. policy has been enabling war crimes and regional destabilization.

On September 27, the Azerbaijani Armed Forces launched a pre-planned attack on the peaceful settlements of the Armed Forces of Artsakh using heavy artillery, military aviation, and drones. That same day, Stepanakert, the capital, was shelled, resulting in military and civilian deaths and casualties. Azerbaijan’s attacks on civilian infrastructure violate international law.

For the next five days, Azerbaijani aggression escalated to cities within Armenia proper and involved the use of UAVs, long-range missiles, and, the Armenian Defense Ministry claimed, F-16 fighters. Turkish involvement became apparent when videos began to surface showing Syrian and Libyan militants and mercenaries in the region. Reports have since emerged saying that Turkey is transferring militants from Northern Syria to Azerbaijan against their will. Among the 1,000 militants sent between September 27th and September 30th is former ISIL commander Sayf Balud. Despite increasing evidence, Azerbaijan’s President Ilham Aliyev and Turkish President Recep Tayyip Erdoğan continue to deny these claims.

The majority of people living in this region are of Armenian descent. Since 1988, they have lived under the threat of their Azeri enemies, who claim this territory has always belonged to them. Yet Azerbaijan’s only claim to this land is Joseph Stalin’s decision in 1921 to place Nagorno-Karabakh under the control of Azerbaijan in an effort to placate Turkey during the Bolshevik Revolution.

Turkish and Azeri denialism has a deep history in the South Caucasus. For the last 105 years, Turkey has denied the Armenian Genocide of 1915 and the systemic effort to wipe out the Armenian nation.

Armenia is one of the oldest countries in the world with a recorded history of 3,500 years. It became the first Christian nation in 301 AD. Armenians pride themselves on their ability to preserve their heritage and Christian identity—despite numerous attempts to wipe them out by the nations, such as Turkey, that surround them.

Indeed, in an effort to mobilize his supporters, Erdogan made a statement in July that called for the continuation of the mission which their forefathers had carried out for centuries.

Nagorno-Karabakh and Armenia are the only obstacles standing in Erdogan’s way as he continues to promote his plans for “Neo-Ottomanism,” a political ideology that supports the political influence of Turkey in surrounding countries and reviving the culture of the Ottoman Empire.

Historically, the nonrecognition of previous genocides has paved the way to new genocides—and that is exactly what is happening now.

Turkey’s support for Azerbaijan allows both nations to continue their genocidal policy. To that end, the United States’ continued support of Turkey and Azerbaijan has brought us all to this moment. Regrettably, according to budget data compiled by the Security Assistance Monitor, the Trump administration increased its military aid to Baku, allocating more than $100 million in security aid in FY 2018-19.

To be clear: this dispute is not about territory. Rather, it is about people. Together Turkey and Azerbaijan, with a combined population of almost 95 million, are waging a war against a mere 3 million people.

On October 5, Amnesty International’s Crisis Response experts were able to trace video footage depicting the use of cluster bombs to residential areas of Stepanakert. They confirmed that M095 DPICM cluster munitions had been fired by Azerbaijani forces and that using “cluster bombs in any circumstance is banned under humanitarian law.”

Protests have erupted throughout major cities in the United States demanding adequate media coverage. Armenian-Americans took to the streets condemning the violence against Armenians in Artsakh and calling on the international community to act.

During a recent press conference in Los Angeles, Rep. Adam Schiff (D-CA) and Rep. Jackie Speier (D-CA) called on Turkey and Azerbaijan to disengage and halt their attacks. In his remarks, Congressman Schiff noted that the United States is home to the largest population of Armenians outside of Armenia. Accordingly, now is the time for the Trump administration to re-examine America’s relationship with Azerbaijan and Turkey.

The United States has both the opportunity and the moral responsibility to prevent further bloodshed. It is incumbent upon the administration to protect the world’s oldest Christian nation and her people. The United States must stand on the right side of history.

Maria Sosyan is an independent writer and producer.