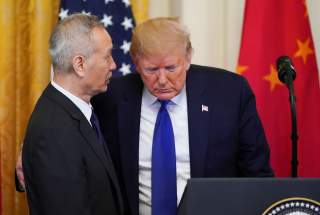 As the old song warns, the US is finding it difficult and complicated to execute the “decoupling” from China strenuously called for by many China hawks, particularly those in Congress. Nothing illustrates these decoupling conundrums better than the unfolding debate over how far the US government should go in curbing the growth and economic power of Huawei, the Chinese telecoms giant. (I’ve chronicled in several blogs the inconclusive campaign by Washington to persuade — and increasingly demand — that close US allies ban Huawei equipment from emerging 5G networks.)

But it’s now been widely reported that a new policy challenge regarding Huawei is deeply dividing Trump administration agencies — and potentially the Trump administration from powerful congressional leaders. Last Friday, news leaked that the Department of Defense (DoD) had intervened to stop a proposed Commerce Department rule that would in effect have made it difficult for US companies to sell crucial equipment (particularly specialized semiconductor chips) to Huawei. Commerce had blacklisted Huawei last May, a move which already decreed no equipment sales to the company; but US companies have exploited a loophole that allowed sale through foreign affiliates of equipment that contained no more than 25 percent US-manufactured parts. The new regulation proposed by Commerce would have cut that allowable share to 10 percent, shutting off virtually all sales.

The DoD veto may not be permanent. Both Commerce and DoD have internal divisions on the scope and extent of Huawei’s exclusion from using crucial US technology.

With the debate and wrangling now entering a vital stage, for this blog what follows are initial reactions and conclusions. First, special note should be taken of the surprising reversal of roles between the DoD and the Commerce Department. DoD’s intervention was based on commercial and competiveness grounds, normally the concern and mandate of Commerce. DoD officials openly stated that they feared that US semiconductor and other tech companies — Qualcomm, Micron, Intel, Google, among others — would be undercut by loss of export revenue, and ultimately replaced by foreign competitors in Japan, Korea, and Taiwan. Defense Secretary Mark Esper stated: “We have to be conscious of sustaining those [technology] companies’ supply chains and those innovators. . . . That’s the balance we have to strike.”

Commerce, on the other hand, has taken a harder line on security as it has moved toward adoption of the new rules. Secretary of Commerce Wilbur Ross expressed great irritation at US companies’ decision to skirt the original rules and, in his mind, subvert US technology security policy. Commerce had also planned to expand the scope of the new rules to include non-defense related parts and components, sweeping in key smart phone parts and components vital to Huawei’s operations. While beyond the scope of this blog, such a move to cripple Huawei’s smartphone production would move the US to explicit industrial policy protectionism, unmoored to serious security considerations.

Two competing and conflicting outside political considerations will also exert powerful influence on the Trump administration’s final decision on sales to Huawei. The first is the president’s desire not to jeopardize the so-called “Phase One” trade deal with China, from which he expects sizable political plaudits from large Chinese imports of US agricultural and manufacturing products.

Cutting against easing Huawei sales restrictions is Congress’ growing bipartisan animus against Huawei as the symbol of Chinese high tech mercantilism. Immediately upon hearing that the DoD had blocked the new Commerce rule, four US Senators penned a strong rebuke to Defense officials, arguing that Huawei is an “arm of the Chinese Communist Party,” and stating “concern[s] that the Defense Department is not appropriately weighing the risks.”

The details and dissension chronicled above demonstrate that decoupling decisions — even with substantial agreement on the challenges Beijing presents to the US — will involve a messy stew of factors and forces, balancing security, technology, competitiveness, domestic political realities, and geopolitical imperatives. As my colleague Jim Pethokoukis recently put it: “Decoupling, especially given its potential role in altering the calculus for military conflict, is a policy stance in need of deeper thought and reflection than it appears to be getting.” “Breakin’ up” won’t be easy or clear cut.

One final point: As this blog was being completed, Boris Johnson — in defiance of US demands and threats — announced that Huawei would be allowed to provide equipment for the rollout of Britain’s 5G networks. This decision merits another blog, but there is a tie to the above chronicle. As noted above, the US has mounted a years-long campaign with its closest allies to force a ban on Huawei 5G equipment, arguing that security must always trump financial or economic pressures. The current US debate, ironically sparked by the DoD’s veto on grounds of concern for the competitiveness of US companies, will almost certainly be echoed by US allies as they, like the British, determine Huawei’s place as a 5G vendor and equipment supplier. They have long pointed out to the US that replacing existing Huawei equipment would entail billions of dollars in additional costs and delay the introduction of vital new wireless networks. Whatever the outcome of the US internal debate over allowing Huawei to continue to purchase semiconductor chips, the genie may already be out of the bottle: Security imperatives do not stand in isolation from financial and technological competitiveness.

This article by Claude Barfield first appeared at AEI on January 30, 2020.