Trump and Modi Herald The Downfall of The Indo-U.S. Partnership 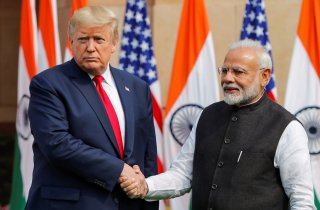 The history of Indo-U.S. ties in the twenty-first century has been marked by incremental and steady advance. At the heart of this relationship have been the shared values of democracy and liberal internationalism which have acted for the relationship as both raison d’être and modus operandi. Even as the two countries failed to extensively cooperate during the Cold War, India and the United States have come a long way since. The two countries signed a civil nuclear deal in 2008, bilateral trade is estimated at $150 billion, and both share a common vision for the Indo-Pacific in the wake of China’s aggressive posturing. So, when the two populist figures of Donald Trump and Narendra Modi came to power in their respective countries, it was assumed that the long-term imperative of Indo-U.S. relations was far bigger for either of these men to disrupt the momentum. But after Donald Trump left India after his maiden visit last month, that conviction seems to be falling apart.

In fact, the nature of Trump’s visit itself raises important questions. Days before his arrival, Trump was eagerly selling his India visit to audiences back home, including the strong Indian-American community who traditionally vote for Democrats. Trump’s message was clear: If a country halfway across the world is rallying crowd of “millions” for him, then why should the Americans not support him in his re-election. The “Namaste Trump” exercise in Ahmadabad was in a way a return gift from Modi who last year was accompanied by Trump in a similar event in Houston. Modi, too, had then used the “Howdy Modi” event in the United States to boost his image in India after receiving flak over his Kashmir policy. Both events, however, yielded very little either on economic or strategic accounts. If so the visits between the two countries have been limited to serve the optics and egos of leaders, howsoever grand they may be, it is definitely a worrying trend.

In the process of his personal embrace of President Trump, Modi may have also opened a new Pandora box. During the Houston event last year, Modi was seen tacitly endorsing Trump’s re-election, which has generated some bad blood with the Democrats. In a bid to appease Trump, Modi might have in process risked the bipartisan consensus in Washington on future of Indo-U.S. ties. Presidential hopeful Bernie Sanders and fellow Democratic Senator Elizabeth Warren have both been critical of Modi’s policies, especially the controversial Citizenship Act. Things got worse when BL Santhosh, the general secretary of Modi’s BJP party, tweeted that India was being compelled to play a role in U.S. presidential elections, naturally in favor of Trump. Though not a lot should be inferred from this tweet (which was later deleted), this could potentially further alienate Democrats who have traditionally been more favorably disposed to India than Republicans. Modi’s betting on Trump should be seen as a risky proposition. If it doesn’t pay off, Modi will be guilty of having given rise in Washington to the most India critical administration in decades.

Donald Trump, too, may be equally culpable of hurting the relations albeit in a different manner. Many in India and at home, including senators like Lindsey Graham, would have wanted the American president to raise concerns over illiberalism in India with Modi. On the contrary, Trump dodged on all such questions pertaining to state of religious freedom in India and instead hailed Modi as a champion of “religious freedom.” On a more direct question on CAA, he said, “I don’t want to discuss that. That is really up to India.” Honestly, one should not expect a lot on that account from Trump considering his own radical postures at home. But even on a strategic front which Washington increasingly wants to explore, a liberal India is a prerequisite. It is no secret that the United States wants to project India as an alternative to China in Asia. This logic was based on India’s image as a democratic and a liberal power, unlike China which is seen more of as a threat in the region. To put it in elusive terms, India is to the United States what Great Britain was to America during the Cold War. But if India falls in the perpetual trap of populism, its appeal as an alternative to China will also fade.

As long as India remains liberal and pluralistic in its outlook, the United States can sell the Indian model to the rest of Asia. This was also reiterated by Trump’s predecessor, Barack Obama, who in a parting shot during his 2015 visit made a plea for freedom of religion to be upheld in India. “India will succeed so long as it is not splintered along the lines of religious faith, and it is unified as one nation.” It was this piece of advice that Lindsey Graham, along with another three senators, wrote to Secretary of State Mike Pompeo and wanted Trump to pass on to Modi. But that was unlikely considering that Trump himself has been unwilling to act on such advice back home.

Thus, by compromising the edifice which has legitimized the logic of Indo-U.S. relationship for years, Trump has instead inserted crude strategic reasoning as the basis of the relationship between the two countries for the future. On Afghanistan too, Trump decided to go his own way, showing no concern for Indian sensitivities. When asked about Indian concerns, Trump responded by saying India was very much on board with the peace talks with the Taliban. But whoever has followed India’s policies in Afghanistan would repudiate this argument. India has long backed the democratic governments in Kabul and has been averse to any talks with the Taliban. But not only has the United States talked to the Taliban as equals but sidelined the Kabul administration in the Afghan peace talks. Worryingly, Washington also pressurized Ashraf Ghani to halt his swearing-in ceremony in February and put pressure on Kabul to release some 5,000 Taliban prisoners. Donald Trump’s actions in Afghanistan are yet another example of his obsession to cut out deals without considering the sensitivities of its regional allies. This along with differing stances on Pakistan has brought to fore the divergent interests of the two countries.

At last, by inserting transactional and cold logic into Indo-U.S. relations, Donald Trump is treating India as more of a client state, which it is not. Second, Trump seems willing to give Modi a pass on its abandonment of liberal democracy as long as it is buying arms from the United States and reducing the bilateral trade deficit. If the relationship is to be grounded on such factors, then taking a cue from U.S.-Pakistani ties during Cold War, the relationship would be far from healthy. For Modi's part, he seems to be perfectly fine with the prospects of Trump’s re-election. He would favor an administration which does not sermonize India on human rights and religious freedom. Unfortunately for the India-U.S. partnership, which Barack Obama described as the “defining partnership of the 21st century,” it didn’t have to be this way.