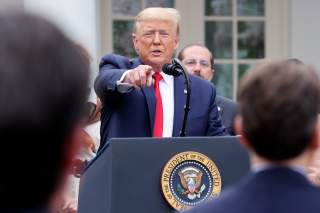 President Trump wants to ‘go big’ on fiscal stimulus, so reports the media. And so far a lot of coverage of its likely contents has started from that premise – asking whether any package would help “stimulate” the economy by boosting spending.

That seems to me the wrong way of thinking about the coronavirus problem, as it pertains to economics.

In economic terms, an epidemic is first and foremost a supply‐​shock – a disruption to supply‐​chains and face‐​to‐​face activity, with workers taken away from production due to sickness or fear of sickness, potentially exacerbated through containment policies. That supply‐​shock, then, reflects the primary externality problem that’s unavoidable in the short term and the economic effects of public health measures needed to mitigate it. It is simultaneously a demand‐​shock because people avoid certain types of spending and socializing and foresee that incomes are likely to be lower as a result of this underlying problem.

Seen this way, it is a conceptual mistake to think then that what we want right now is for fiscal policy, through taxes and spending, to somehow encourage a “return to normal” through boosting consumption. In fact, returning behavior to normal would risk worsening the externality problem associated with the spread of the virus, because more activity means more transmission. You wouldn’t start construction work with an imminent hurricane.

Rather than asking: “Will this stimulate the economy?” (or even the stock market), it seems to me policymakers should instead be asking: “How can we deal with the massive externality problem without causing too much economic distress?”

Viewed through that lens, big tax cuts – such as the proposed employee payroll tax cut – seem an expensive blunt instrument for alleviating distress. If social distancing is necessary, we don’t want employees out spending more money because they have more in their pockets. Certainly, there’s no case for a big payroll tax cut through November’s election, as President Trump seems to want.

The key challenge is how to ease liquidity constraints binding on households and businesses which would suffer the biggest losses of income if demand for their services collapses or their activities were required to be temporarily paused. The payroll tax cut won’t do that, not least because anyone laid off won’t benefit from it, and those workers in many service industries such as restaurants and bars (where tips are important) won’t benefit much from it.

Given few seem to have insured against this eventuality, there’s much more rationale for targeted measures that help otherwise viable businesses from going under or provide a degree of security for workers or contractors who would otherwise have perverse incentives to continue working even if sick. An employer payroll tax cut to avoid worker layoffs makes more sense than an employee‐​side cut, particularly if targeted at certain industries. And though they would be beset by cronyism problems, I can at least see the rationale in lending programs to help certain businesses bridge over what is hopefully a V‑shaped recovery.

What we want to avoid though is big bailouts and moral hazard problems — throwing money at businesses that will not be viable in the new post‐​epidemic world. There have been worrying reports about the president wanting assistance for oil and natural gas companies in light of the fall in oil prices, for example. We don’t want to entrench the idea either that epidemics are some abnormal occurrence that governments would always step in to solve, crushing future market responses such as pandemic insurance or firms and households taking precautionary measures.

The key point though is that the package the president eventually puts forward shouldn’t be judged by “whether it will stimulate the economy,” but instead “whether it will mitigate the distress that is coming as the virus spreads and necessary measures to contain it are rolled out.” It’s a subtle difference in emphasis, but an important one.