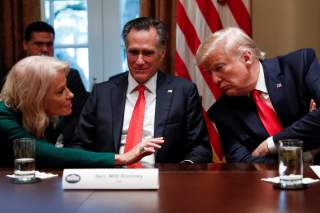 President Donald Trump said he’s open to increasing the age for buying e-cigarettes from 18 to 21, but is resisting an outright ban, which he fears could fuel a black market.

Trump on Friday convened public health advocates, federal officials, and tobacco executives and said, “Twenty-one, we are going to be doing,” regarding the minimum age for buying vaping products. It’s currently age 18.

The Trump administration reversed course earlier this week on a proposed Food and Drug Administration ban on flavored vaping. The president explained his change of mind to the group, gathered for a conference on youth vaping in the Cabinet Room.

“The one thing I see, you watch Prohibition with the alcohol; you look at cigarettes; you look at it all. If you don’t give it to them, it’s going to come here illegally,” Trump said, adding:

But instead of Reynolds, Juul, legitimate companies, good companies making something that’s safe, they’re going to be selling stuff on a street corner that could be horrible.

That’s the one problem I can’t seem to forget. You just have to look at the history of it. Now, instead of having a flavor you have that’s at least safe, they’re going to be having a flavor that’s poison.

Seated beside Trump was Sen. Mitt Romney, R-Utah, who has occasionally been a critic of the president. He reminded Trump of his previous policy, in touting an anti-vaping measure he sponsored with Sen. Jeff Merkley, D-Ore.

“Myself and Sen. Merkley have offered legislation that is very consistent with your policy from September, which is to ban flavors so that we don’t have kids getting hooked on nicotine products,” Romney said.

“When I came into the job, we decided action needed to be taken,” he said. “We agreed this is a serious issue. So, we have already removed all of our flavors from the market. Most recently, we removed mint. For us, that was 70% of our business. So, it was a big step for us, but we felt it was the right thing to do, based on the data on this issue.

However, Ryan Nivakoff, the CEO of Njoy, another maker of e-cigarettes, said of teen vaping, “It’s not necessarily a flavor problem.”

E-cigarettes were a product initially made to help adults quit smoking, but 47 people have died and nearly 2,300 have suffered severe illnesses from vaping, including many teens, according to the Centers for Disease Control and Prevention.

“These are killing our kids,” Romney said, adding: “Utah is a Mormon state, and half the kids in high school are vaping.” Mormons typically refrain from using tobacco and drugs.

Fred Lucas is the White House correspondent for The Daily Signal and co-host of "The Right Side of History" podcast. Lucas is also the author of “Tainted by Suspicion: The Secret Deals and Electoral Chaos of Disputed Presidential Elections.” His article first appeared in The Daily Signal in 2019.