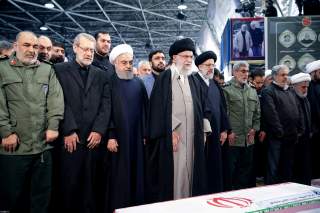 Across Iran, hundreds of thousands poured into the streets to mark General Qassem Soleimani’s death. The head of the Islamic Revolutionary Guard Corps’ elite Qods Force unit for more than two decades, Soleimani was revered in Iran.  In 2015, for example, Tabnak.ir, an Iranian news website affiliated with more pragmatic factions inside the Islamic Republic, published a poll in which their audience voted Soleimani as one of the most respected figures in Iran. In the wake of Syrian President Bashar al-Assad’s chemical weapons attack on East Ghoutra, a Damascus suburb, Iranians polled by the reformist Khabar Online, a theoretically independent news site inside Iran, voted Soleimani “man of the year.”

The problem is not that ordinary Iranians support terror; they do not and, indeed, over the decades have often been victims of it. Rather, Iranians see Soleimani primarily as a nationalist hero both because he carefully cultivated his own image and because he most Iranians have not heard any alternative narrative. If they consume only Iranian media, they would be unaware of Soleimani’s role in Syrian sectarian cleansing or terrorism more broadly.

It is one thing for Iranians to believe their own media. The problem is that across much of Iraq and the Levant, the Iranian narrative is widely accepted. Soleimani, in particular, and the Iranian government more broadly are masters of what military practitioners and strategists refer to as the DIME [Diplomatic, Information, Military, and Economic] model. The basic idea is that any coherent strategy encompasses all four, and the whole is greater than the sum of the parts. The United States for its part consistently drops the ball on Information strategies, either dismissing them as propaganda and somehow illegitimate or, as an American colonel working on influence operations in Baghdad told me more than 15 years ago, “We’re so afraid of doing anything wrong that we end up doing nothing right.”

While many Sunni Iraqis despised Soleimani for both his sectarianism and his efforts to undermine reconciliation, many Iraqi Shi’ites not only believed that Soleimani was almost single-handedly responsible for crafting Iraq’s strategy to counter the Islamic State (ISIS), but also that the United States was in part responsible for its rise.

Supreme Leader Ali Khamenei gave multiple sermons spinning that lie, and President Hassan Rouhani affirmed it. The muted, if not entirely absent U.S. response allowed that narrative to sink in long before then-candidate Donald Trump called President Barack Obama the “founder of ISIS,” a remark which got far more play in Iranian-supported media than even in the U.S. press.

Visiting Karbala multiple times for seminars as a guest of the Imam Hussein Shrine over the last five years, I had regular opportunities to brush shoulders with pilgrims from Iran, Syria, Lebanon, Pakistan, and Afghanistan. Almost to a man (and woman), they believed that the IRGC or the militias it trained did the bulk of the fighting against ISIS and that the United States was using ISIS to target Shiites. Militia leaders like the Badr Corps’ Hadi Ameri regularly cited close U.S. ties to both Turkey and Saudi Arabia as proof of the conspiracy. As with any good conspiracy, the narrative rested on cherry-picking facts. When the Islamic State overran Mosul, the initial White House response was hesitant, demanding political reforms to blunt sectarianism and corruption rather than empowering Prime Minister Nouri al-Maliki with even more state-of-the-art weaponry. The IRGC did not hold back weaponry; however, even if not all of it was as effective as promised. Nor did many Shi'ites ask why, if Soleimani and Iran's allies were so committed to defeating the Islamic State, did the Syrian air force when it alone operated over Syria bomb civilian populations but not the Islamic State capital of Raqqa. That so many Iraqis from 2014 to the present day believe Soleimani’s narrative about himself and the origins of the Islamic State is testament to just how far behind the United States is on the information battlespace.

The problem is not just in Iraq. Broadly speaking, the U.S. military’s information strategy is to be truthful in order to build credibility. The drawback to this is that it can take days to determine where the truth lies during which the news cycle moves on. The Iranian strategy—played out in Iraq, Afghanistan, Lebanon, and elsewhere—is not only to throw stuff at the wall and see what sticks but to do it repeatedly. While stories asserting that the United States sought to convert Afghanistan to Christianity might seem patently false, a single company subsequently selling sniper scopes etched with Biblical citation numbers can affirm propaganda. If the goal of the U.S. military’s counterinsurgency (COIN) strategy is to win hearts and minds, Soleimani and his colleagues writing false first drafts of history can at worst cast doubt and, from an IRGC perspective, can undermine U.S. COIN further if false rumors and propaganda lead to kinetic action. As important as White House, State Department, and embassy statements can be to correct misconceptions, they are often drowned out by dozens of Iranian statements in between. Indeed, one of the first things the IRGC did in Afghanistan after the fall of the Taliban was to establish a network of terrestrial television and radio stations to amplify Iranian propaganda. And, when Operation Iraqi Freedom began, the Hezbollah-operated al-Manar competed with U.S.-funded al-Hurra for the satellite television audience, the U.S. government forfeited opportunities to influence the poor and dispossessed by ceding the terrestrial market to Iranian-funded terrestrial channels like al-Alam or Ahlulbayt radio.

In 2003, diplomat Ryan Crocker and National Security Council official Zalmay Khalilzad—both future ambassadors to Iraq—met Iran's then U.N. ambassador (and now Foreign Minister) Mohammad Javad Zarif in Geneva and negotiated an Iranian non-interference agreement with regard to Iraq. Soleimani violated that agreement when he infiltrated IRGC and IRGC-trained militiamen into Iraq. Their subsequent actions cost hundreds of American lives, tens of thousands of Iraqi lives, and lost Iraq a chance for stability and affluence commensurate with its natural wealth.  If more Iraqis knew the truth about Soleimani, his death would be met with broad celebration. That so many Shi’ite Iraqis instead condemn the U.S. action and absolve Soleimani of the damage he did to Iraq simply underscores how corrosive U.S. inattention to information is to U.S. interests in the long-term.

A former Pentagon official, Dr. Rubin has lived in post-revolution Iran, Yemen, and both pre- and postwar Iraq, and he spent time with the Taliban before 9/11. He is the author, coauthor, and coeditor of several books exploring Iranian history, American diplomacy, Kurdish studies, and Shi’ite politics, including “Kurdistan Rising” (AEI Press, 2016), “Dancing with the Devil: The Perils of Engaging Rogue Regimes” (Encounter Books, 2014); and “Eternal Iran: Continuity and Chaos” (Palgrave, 2005).

Dr. Rubin has a Ph.D. and an M.A. in history from Yale University, where he also obtained a B.S. in biology.