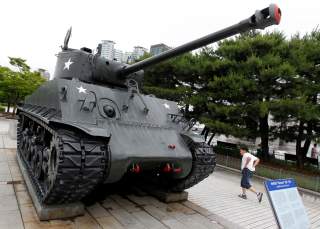 Defense officials were unclear what the president meant by "brand new Sherman tanks."

President Donald Trump has vowed that "brand new Sherman tanks" will be on display this July 4th in Washington, D.C., and no one in the military seems to have an idea what the heck he is talking about.

The "Salute to America" this year is meant to pay tribute to the U.S. military. Speaking to reporters on Monday, the president said the event will showcase the latest fighter aircraft and tanks.

"You know we're making a lot of new tanks right now. We're building a lot of new tanks in Lima, Ohio – our great tank factory that people wanted to close down until I got elected and I stopped it from being closed down, and now it's a very productive facility and they do, nobody's the greatest tank in the world."

Let's unpack the president's statement a bit: The M4 Sherman was the main U.S. military battle tank during World War II. More than 50,000 Shermans were produced during the war. The tank proved to be inferior to most German panzers and it took the Army some time to develop tactics to make the best of the Sherman's limited protection and firepower.

Although the U.S. military stopped using Sherman tanks after the Korean War, Paraguay continued to use the M4 until 2018, according to the Army.

Defense officials were unclear what the president meant by "brand new Sherman tanks." A White House spokesman declined to elaborate on Trump's remarks.

Sherman tanks have been prominently featured in several World War II movies, including "Fury" with Brad Pitt; "Kelly's Heroes" with Donald Sutherland; and "A Bridge Too Far" with Michael Caine.

It was unclear on Monday whether the Army has any Shermans left in its inventory of tracked vehicles.