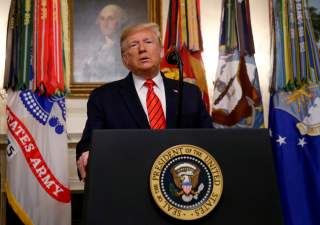 The two-hour-long raid took place in northern Syria and a DNA test confirmed the dead body is that of al-Baghdadi’s, Trump said Sunday morning. Al-Baghdadi, the leader of ISIS, has been in hiding for the past five years and was last seen in a propaganda video in April.

“We’re thinking about it. We may,” Trump told reporters Monday after being asked about potentially releasing the footage, The Hill reported. “We may take certain parts of it and release it, yes.”

Trump confirmed in a televised speech Sunday morning that al-Baghdadi had been killed, noting then that he is in favor of releasing parts of the video and saying the ISIS leader was “whimpering, screaming and crying” when he died.

“He was whimpering, screaming and crying — and frankly, I think it’s something that should be brought out so that his followers and all of these young kids that want to leave various countries, including the United States — they should see how he died,” Trump said Sunday. “He didn’t die a hero. He died a coward.”

U.S. special operations forces trapped the ISIS leader in a tunnel, and al-Baghdadi ended up detonating a suicide vest, killing himself and three of his children, according to Trump.